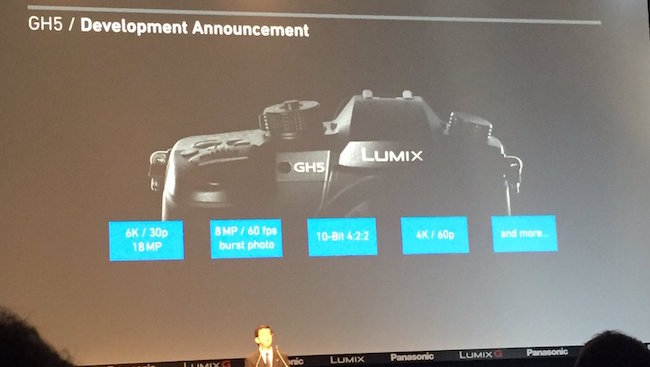 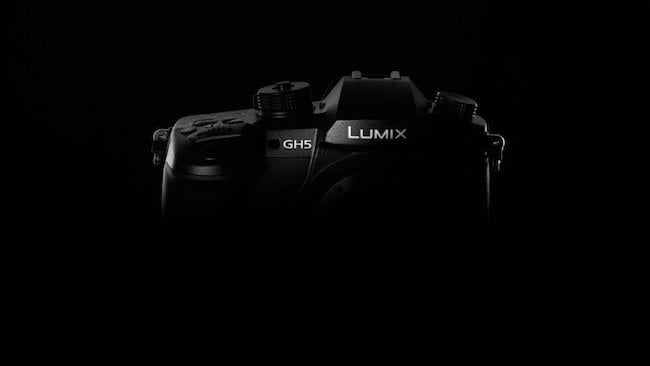 Photokina has opened with a bang as Panasonic has announced its new GH5 camera, which will offer what the company says is a world's first 4K 60p/50p and 4K 30p with 4:2:2 10-bit when it is released in the first half of next year.

Well we've just been given a tantalising glimpse of the new GH5 from the Panasonic press conference at PhotoKina today.

And it is only a glimpse because we're told the camera is only at prototype stage right now and won't be shipping until the "first half" of 2017. So expect it any time between the beginning of January and the end of June.

Please understand that this is very approximate information - details were scant and we've had no independent verification. As soon as the official press release arrives, we'll append it to this article and make corrections if necessary. [Update: Press release now available - below]

The rumours that the camera would shoot 6K video have proved to be at least partially true. What we understand is that the camera will shoot 30 fps at 6K resolution. You will then be able to extract a 6K still image (enough for a 38" enlargement) that is made from 18 megapixels.

An approximately 8-megapixel equivalent ‘4K PHOTO’ can be extracted from a video shot at 60 fps.

We don't think you'll be able to shoot continuous video at 6K - but you can see the direction this is going.

Now it is possible to spin this as being a half measure: 6K video but not really. But there's something much more important than this here. It's that "Hybrid" photograhy - where stills are extracted from extremely high resolution video - is now most definitely a thing. This, almost certainly, is the next direction that still photography will take. Essentially, you will take stills using video.

This may be the most significant camera for two years.

Panasonic today announces the LUMIX GH5, the world’s first[1] Compact System (CSC) interchangeable lens camera capable of recording high-precision smooth 4K 60p/50p and faithfully reproductive 4:2:2 10-bit 4K video[2]. This premium camera will offer exceptional performance for professional photographers, videographers and emerging photo/video-hybrid creators.
The new LUMIX GH5 is scheduled to enter the market in the first half of 2017 and will feature Panasonic’s new ‘6K PHOTO’ offering – an approximately 18-megapixel-equivalent still image extraction from an ultra-high quality video with approximately 9x higher resolution than Full HD. Furthermore, an approximately 8-megapixel equivalent ‘4K PHOTO’ can be extracted from a video shot at 60 fps.
Panasonic also announces the new LEICA DG VARIO-ELMARIT F2.8-4.0 lens series. These announcements demonstrate Panasonic’s dedication to continually deliver outstanding customer value and new culture in photography and film production by developing premium, new-era products and functions.
Commitment to innovation
The LUMIX GH5 will allow creative minds to capture their vision with ease and style, and further confirms Panasonic’s commitment to develop incomparable products and functions to address the new demands in photography and film production.
Panasonic is committed to the development of innovative digital cameras under the theme “create a new photo culture in the digital era”. The company brought the world’s first CSC, the DMC-G1, to market in 2008[3] and the succeeding DMC-GH1 achieved the world’s first Full HD video recording in 2009[4].
Professional, versatile 4K videography with freedom and ease
The LUMIX DMC-GH4 has received much critical acclaim since its launch in 2014 and was the first camera to realise 4K 30p/25p video recording[5]. Building on its predecessor’s success, the LUMIX GH5 will offer a new world first: 4K 60p/50p and 4K 30p with 4:2:2 10-bit.
Exceptional 4K video recording will be packed into a compact, lightweight design created for videographers to take the camera anywhere and shoot in any location. With the unprecedented video recording performance of the LUMIX GH5, Panasonic aims to elevate its status in the film production industry.
Elevating outstanding photography to new heights
The LUMIX GH5 will dramatically advance the conventional ‘4K PHOTO’ function with ‘6K PHOTO’ that will cut a still image out of ultra-high definition video (4:3 or 3:2 video footage) with approximately 9x higher resolution than Full HD.
Silent and unobtrusive with quick focus to capture the moment, the LUMIX GH5 will allow photographers to take advantage of high-speed, long-time high frame rate shooting capability. Unmissable moments can also be saved as beautiful photographs in a higher resolution that complies with larger size of printing by substantially increasing the resolution from 8-megapixel (4K PHOTO) to 18-megapixel (6K PHOTO) equivalent resolution.
New LEICA DG VARIO-ELMARIT F2.8-4.0 lens series
The LUMIX GH5 will be featured at Photokina 2016 alongside a new LEICA DG VARIO-ELMARIT F2.8-4.0 lens series. Achieving both high optical performance and compact size, the LEICA DG VARIO-ELMARIT F2.8-4.0 lens series will include a new 12-60mm standard zoom lens, an 8-18mm wide zoom lens and a 50-200mm telephoto zoom lens. All lenses will be showcased as reference exhibits at the Panasonic booth.
For all the latest news and information, follow @LumixUK on Twitter, Facebook and Instagram.
[1] As of 19th September 2016 according to Panasonic research
[2]In 4K/30p, 25p, 24p, 23.98p video recording
[3] For a Digital Interchangeable Lens System camera, as of 12 September 2008, according to Panasonic research
[4] For a CSC as of 3 March 2009, according to Panasonic research
[5]For a CSC as of 7 February 2014, according to Panasonic research