SmallHD’s new 13in display, the problems with HDR, and Sonnet’s brilliant Thunderbolt clamp 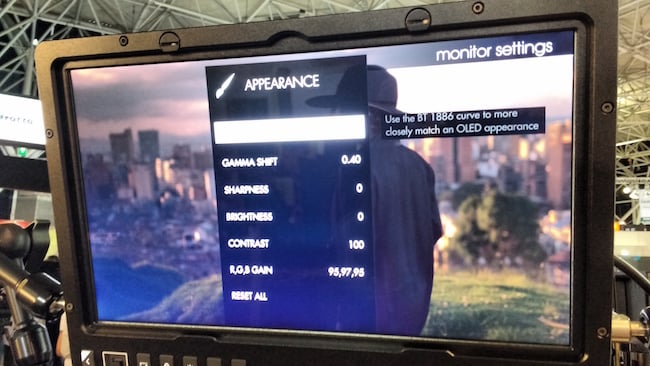 Notes from IBC2016 Day Three: As Phil Rhodes finds out, size really isn’t everything, and sometimes the innovation that counts can be as mundane as a clamp that stops your Thunderbolt cables falling out in the slightest breeze.

The problem with HDR is that while the very best demonstrations of it are immediately and undeniably engaging, the most common demonstrations of it are actually slightly disappointing. Possibly (probably) we’re spoiled, wandering the floor of shows like IBC and viewing pictures sourced from the highest-grade playback devices, displayed on the highest-grade monitors, but it’s a difficult feeling to shake. Both Sony and Dolby are naturally showing their very best work, with Sony in particular including a technology demonstration of the BVM-E171 17-inch HD OLED display.

This is interesting because it’s HDR in HD, whereas most demonstrations of high dynamic range pictures have used resolutions near 4K. That much resolution on a 17-inch display would be largely useless, of course, unless an extremely nearby viewer were to be equipped with a jeweller’s loupe, but that’s not really the point — Sony reports receiving requests for HDR in HD, and they’ve built an experimental version of the E171, which is not intended to indicate an imminent product release, in response. The results are spectacular: better pixels, it seems, continue to trump more pixels

However, both Sony and Dolby are also showing something more akin to the experience of HDR that people are likely to be able to achieve in the home, at least with current technology. Frankly, current TFT technology generally struggles to achieve really good results with HDR, at least without zoned LED backlighting, which is a technology Sony and others are demonstrating. But the OLED-based LG Signature display prominently displayed to people passing Dolby’s exhibit, as well as the domestic HDR demos at the Sony stand, seem to lack the sheer punch of the best displays.

They’re good, attractive, creditable pictures, but they don’t have the eye-drawing attractiveness of things like the BVM-X300 and Dolby’s reference displays. Now, naturally, those displays aren’t financially practical as home viewing devices, but it would be nice to think that we would soon start to see devices capable of pushing the home experience of HDR a little closer to the high-end ideal.

Within this limitation, SmallHD is doing some good work. Having shown a 32-inch display at NAB, and thereby achieving a large HD display, the 13-inch version shown at IBC2016 is a comfortable medium size which will attract people interested in a display that’s slightly more friendly to focus pullers than the smallest seven-inch types. Seven-inch display panels with a full 1920 by 1080 pixels have been available for some time, and are used by SmallHD in their 700-series monitors as well as companies like Atomos, but they suffer the same issue as larger 4K displays, even up to 24 inches: the pixels simply become too small to see.

Thirteen inches is a much more viewable size while still being portable, and SmallHD’s product makes a lot of sense. The company is cautious about any discussion of potential 4K products, but given the distinct lack of 4K LUT boxes, and given the popularity of the 700 series not only as a monitor but as a LUT processor, this might be a space worth watching.

We’ll take a moment here to talk about something utterly unrelated to monitoring, but which is likely to reduce the blood pressure of DITs and editors worldwide. Sonnet Technologies is a manufacturer of determinedly high-speed storage products, and is showing, among other things, some solid-state storage devices, clearly intended as jump drives, based around M.2 SSDs. Its other products include a dual CFast card reader with Thunderbolt connectivity.

All of these products are very relevant to the overworked DIT and deserving of mention in themselves, but as any truly dedicated sceptic might point out, Thunderbolt is, from a mechanical point of view, possibly the world’s least appropriate interconnect for use in highly mobile circumstances. Given even the slightest stress, the cables fall out, break, and become unreliable.

Sonnet has therefore produced a neat little clamp which slips easily over the end of the requisite cable and locks it in place with a simple screw jack in much the same way as a D-series connector of old. The approach requires an appropriate screwhole beside the connector, but it’s a lovely little innovation. It’s hard to put on a pedestal alongside Zeiss’s new zoom or the Blackmagic acquisition of Fairlight, but it’s a brilliant little thing nonetheless. 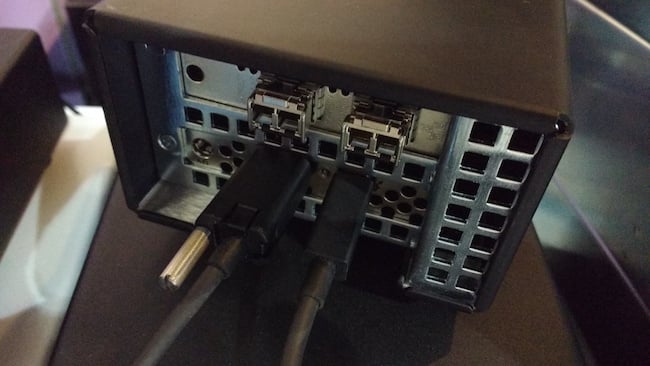