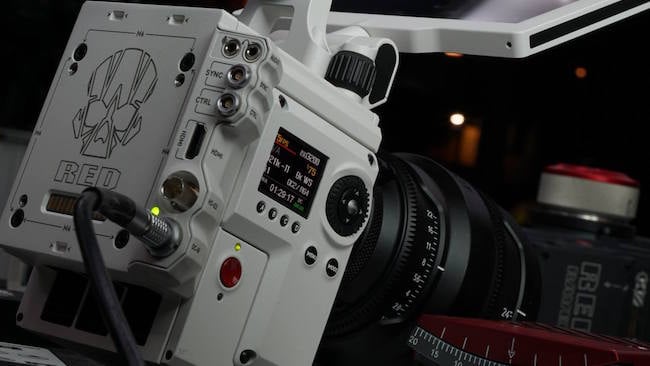 RedShark Replay: A decade ago recording in 8K resolutions let alone broadcasting it looked about as realistic as a manned landing in the Andromeda Galaxy, but it was apparent at IBC that 8K is being lumped into a suite of media enhancements set to hit us by 2020 - or sooner. 8K is becoming a regular part of the conversation and what’s remarkable is that this is no longer a surprise.

The reason for all this lies in a dramatic leap in bandwidth and a parallel demand for video which is pushing tech innovation.

Good news is that bandwidth is coming in the guise of the 5th generation mobile communications network 5G. This will have baseline speeds of at least 20Mbps and extremely low latency and very low power consumption — a combination that will make high resolution individually delivered media a reality.

Factor in the scaleable concept of end to end IP production, where the underlying fabric won’t have to be ripped and replaced but simply expanded in modular fashion to achieve greater data throughout, and 8K is a real prospect.

All of this will come together around the Tokyo Olympics in 2020. Not for nothing did Olympic host broadcaster OBS capture 130 hours of 8K content in Rio, downgrading it to 4K for playout by NBC and others.

While NHK plans live terrestrial transmissions of 8K to domestic audiences, in theory the arrival of 5G could speed 8K video to the home anywhere. It could be a hybrid delivery model with 8K issued over fast broadband pipes and transferred around the home on WiFi.

“5G will be transformational,” said Ulf Ewaldsson, CTO of Ericsson. “It means we can change the production of content, change the way we distribute things and we are able to create new content such as combining 8K with AR. This is not so far away.”

Indeed, Discovery Communications CTO John Honeycutt said his company — owner of Olympic rights in Europe for a decade from 2018 via Eurosport — is exploring VR and overlays of extreme high resolution pictures with AR (virtually racing against Usain Bolt was Honeycutt’s vision).

Whether there’s any benefit to viewing 8K on a mobile device is beside the point. The point is that bandwidth speeds will increase so dramatically that an unprecedented wealth of data will be available to mix and match applications like AR, VR, 3D, 4K, 8K in realtime.

“While 8K may be still a moonshot for many, demonstrating just how easy it can be helps underscore our future-proofing message; that is, there is an affordable answer today that costs the same for SD, HD, 4K, and, if you wish, 8K,” said Jan Weigner, CTO and Co-founder at Cinegy.

Compression will still be key to transporting video over 5G, though. Advantech for example has debuted a HEVC video encoder which is rated to process 8K at 60 frames a second.

As the firm’s David Lin, senior director of the video solutions, points out the performance of this type of technology not only benefits 4K and 8K but VR and 360 video applications.

It’s not the only codec developer with 8K on their minds. V-Nova also makes the case for its codec Perseus to unlock more reliable and better quality UHD, VR and mobile services.

“We are demonstrating delivery of UHD VR experiences at 4K,” says Fabio Murra, SVP Product and Marketing. “It has to be at least 4K and it will probably be more... 8K, 16K.”

A single server can manage content over multiple LED screens, or drive a 4x4K projection system with soft edge blending, mapping and geometry correction. Alternatively, Wings Engine Raw can be used to blend or overlay multiple parallel HD, 4K, 5K or up to 6K streams in realtime.

While kit manufacturers like Ikegami have been commissioned by NHK to develop an 8K live production range (and an OB vehicle used in Rio), development is also happening in cinema. Panavision's Millennium DXL, due for release early 2017 is a collaboration between Panavision, RED and VFX house Light Iron. It combines RED's 8K sensor, core electronics, and recording format with Panavision optics (notably all Primo 70 lenses) and Light Iron's colorimetry to replicate a highly stylised cinema look. It can be rented exclusively through Panavision.

RED itself is arguably innovating faster than any other camera maker. Its 8K Dragon sensor, housed in a $60,000 Weapon camera body, is shooting Guardians of the Galaxy 2, while the company is also developing a new 8K sensor for the Weapon, called Helium. This will cram 8K's worth of pixels (that's 16 times the resolution at which most current films are projected) into a smaller, Super 35mm-sized chip making it suitable for a wider array of lenses. RED custom built a camera containing the chip for director Michael Bay, who plans on using it on Transformers: The Last Knight.

The point to shooting resolutions beyond 4K is less about image sharpness and more about the point at which visible artefacts disappear. Pixelation is most noticeable in VFX-intensive scenes where the additional image information can prove useful. That's why other camera makers are keen to push 8K. Canon has previewed a prototype of an 8K camera housed in a EOS body. Sony, which already permits 8K shooting via its CineAlta F65 currently denies it will launch a slimline version for TV work but its consumer electronics division is reportedly working.

The flagship finishing suites from SGO and S.A.M. (Quantel as was) are already capable of manipulating 8K images.

At IBC, NHK showed off a OLED panel just 1mm thin made out of plastic. The rollable screen is being devised for Japanese homes, which tend to be smaller than western counterparts. Putting up giant 100-inch TVs to view 8K transmissions may hog too much living space, but not if the screen can simply be scrolled up tidily into the ceiling. It’s this attention to detail plus an unswerving belief in its vision that has seen NHK successfully rollout 8K test transmissions daily with a view to going live as earlier as 2018, and going ballistic around the 2020 Games.

Clips from Rio were viewable on NHK’s stand via a 130-inch display composed of 4 x 65-inch 4K ultra thin glass OLEDs. The Japanese broadcaster had two 8K production teams in Rio manning four production vehicles. To generate the 22.2 surround sound, NHK explained that in Rio it had devised a ‘microphone tree’ of different types of mic, such as shotgun omni and cardioid. Each tree had eight to 12 microphones arrayed in two or three layers, and three or four of those trees were placed around the venue.

NHK is currently trailing daily 8K broadcast aired in the broadcaster’s local bureau which are open to the public. Content includes material from Rio, a concert by J-pop star Kyary Pamyu Pamyu and footage of Japanese conductor Seiji Ozawa in a Beethoven concert.

Now, about that rocket trip to the neighbouring galaxy...