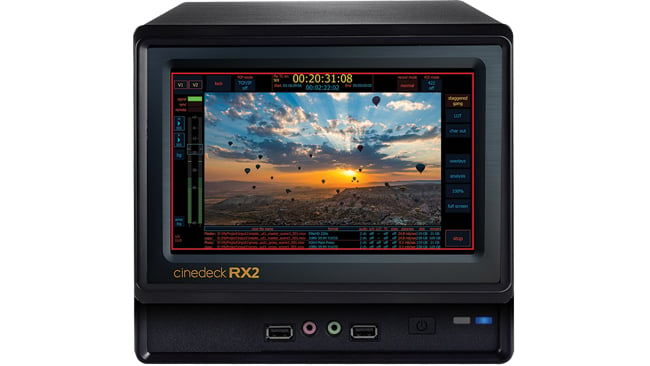 Cinedeck has taken up one of the positions in the IBC Launchpad, a special area of the show designed for first time exhibitors, and has got some interesting new kit on display.

Cinedeck is one of those small companies that is tightly focussed on one thing but can be an absolute life-saver if it is that same one thing that has gone wrong in your project. As it explains, its cineXinsert has been designed to help in those moment when a problem is discovered in a file and it is therefore necessary to go back and repeat the entire export and QC process, with all the time and resource penalties and general vexation that entails.

The software essentially gives users all of the tools they need to sort problems out and change change specific audio and video essence in a flat file in a familiar player/recorder interface to simply. This can stop those massive backwards steps having to be made and the software can even streamline the deliverables process by allowing users to create files with up to 32 audio tracks, bypassing the 16-track limitation of SDI.

For IBC new features include a new AS11 metadata editor, which allows the necessary metadata edits to be made to AS11-DPP files after inserting; an Audio Versioning Tool to help create multiple audio versions with a simple re-wrap; and PC support.

The company is also debuting the RX2, a portable and affordable ($11,995 MSRP) two channel record & playback device. Based on the company’s existing RX3G, it adds PCIe connectivity to provide even more network flexibility than its predecessor while supporting a full complement of Cinedeck standard codecs and wrappers.

Each channel can be controlled just like a tapedeck over RS422, meaning that users can run each channel of the RX2 as an independent tape deck while controlling each channel separately using their preferred NLE, 3rd party output device, or even — and there is possibly a slight irony here — a tapedeck.