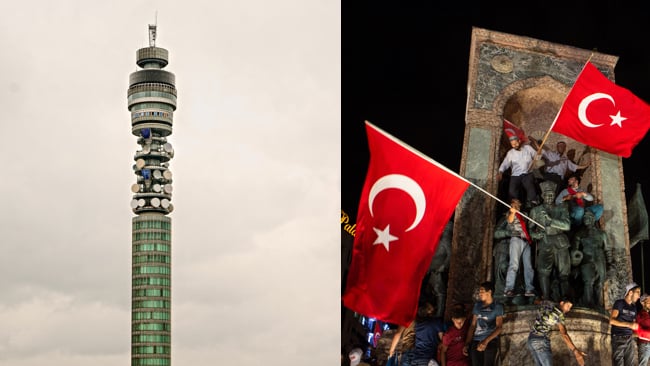 A fascinating story that shows just how much television production has changed: to the point when even armed rebellions and soldiers shutting down TV stations cannot necessarily keep channels off the air.

Increasingly, technology is changing the way the world works, in deep and sometimes surprising ways.

The recent attempted coup in Turkey is a striking example of this, with the beleaguered President able to text the entire population while the attempted coup was taking place. He also appeared on national TV - via his smartphone.

Behind the scenes, a London studio facility was able to put a Turkish news broadcaster back in touch with the nation in an incredibly short time, during a broadcasting blackout in the home country.

Here's how it happened.

TRT World is an 18 hour per day Turkish news broadcaster. Live news production is shared between Istanbul and its London bureau, with five to six hours from its Turkish studio and the rest from London.

The London facility is provided by Celebro Media, a TV studio complex in Central London, close to the BT Tower and a two minute walk from the BBC's famous Broadcasting House. Celebro has invested heavily in equipment that allows them to receive and send video feeds in almost any format. They have massive internet bandwidth: hardly surprising because the BT Tower, the UK’s main communication hub, is just around the corner.

The studio that TRT uses to broadcast to Turkey is well equipped, with robotic cameras and a sumptuous video backdrop behind the presenter. Live production is handled by NewTek’s TriCaster Advanced Edition

Virtually everything in the studio is connected using IP over fibre, instead of the usual assortment of cable types.

As the coup attempt progressed, it became clear that the broadcasters were a target. Armed troops stormed the offices of TRT in Istanbul. Within minutes, cables were pulled and they were off the air. But this had no effect on the London operation, which was able to take over almost immediately. It was the only part of the organisation that was still up and running. The biggest issue, though, was the lack of transmitters in Turkey.

Luckily, some Celebro Media staff were working late in the evening. They immediately set about finding a way to get the output of the London studio available to the whole of Turkey.

Realising the implications of what they were watching on UK and international TV news channels, the remaining Celebro Media staff started to return to the studio. In a remarkably short time, they were broadcasting live to the world on Facebook. A feed to YouTube took slightly longer: around a couple of hours.

TRT and Celebro Media made their live feed available to any broadcaster that wanted to use it via the BT Tower.

Inside the studio, with virtually everything connected by IP over fibre, TriCasters and various video sources were available courtesy of NewTek’s NDI. Instead of having to repatch and replug, all video resources were available on the network, making it not just possible but relatively easy to completely reconfigure the studio and production gallery for the emergency broadcast.

The way that TRT and Celebro Media were able to get rolling news coverage of the Turkish Coup available to the Turkish people in such a short space of time is a perfect example of how broadcasting is changing. Video over IP - particularly with a product like NewTek’s NDI - is likely to be the dominant technology in live studios from now on. It’s tempting to say that with live production and streaming of news events on platforms like Facebook Live, “broadcasting" has a new meaning.