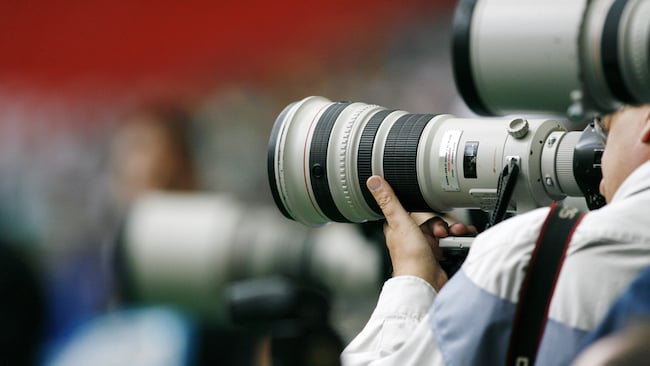 It's all about the heat

RedShark Replay: Those watching last year's Rio 2016 Olympic coverage closely will have noticed the assembled press photographers were sporting a mix of black and white lenses. It's not just a design choice either.

This is a question that crops up every now and then in photography forums and, for a start, it turns out they’re not white. While the rest of the industry might be happy to refer to them as white lenses, Canon itself refers to them as light grey or beige.

There is a good reason for the lighter colour, whatever it is, and one that stretches back to 1976 when the first Canon lenses with the ‘white’ barrels rolled off the production line. The white lenses are all large super-telephotos.

“Lenses contain glass elements. These expand with heat,” the Canon Europe website writes helpfully. “This is not usually a problem with compact lenses − the amount of expansion is small. But large lenses contain large elements and here expansion can bring a lens close to the limits of its design tolerances. A white surface reflects sunlight, helping to keep the lens cooler.”

So far so pragmatic, but over the years it has become a bit of a marketing tool too. The white lenses with their distinctive red ring are now intimately associated with Canon’s professional L series. Whether they still really need to be off-white in an era of non-fluorite and less expansion-minded glass elements is open to question. And indeed the look itself is a bit of a bone of contention, with some photographers disliking their prominence and even going so far as to describe them as ‘chintzy’.

But they remain seriously aspirational. PetaPixel even has a story about a Korean company that, amongst a fairly bewildering array of other services, will also give you a custom lens job and take your glass over to the white side.

There’s a bit of a postscript to this as well. “Incidentally,” Canon writes, “you will find that the manual focusing action of some black lenses allows focusing past its infinity setting (sometimes called over-focusing). This is also to allow for expansion. If the lens is used in hot conditions, infinity focusing will be closer to the end of the travel.”

And there will certainly be some of those over the next few days in Brazil. As there will be a whole plethora of white lenses amongst the press corps.