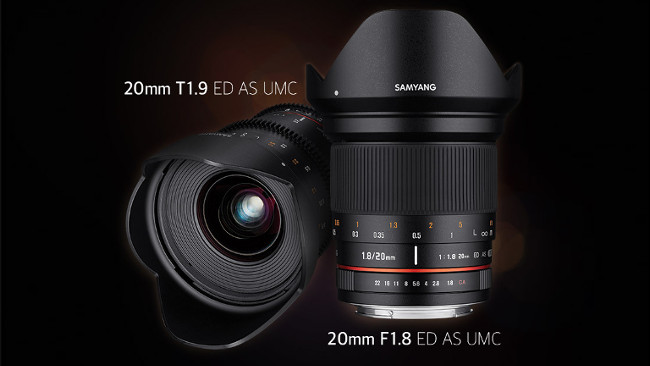 Rokinon / Samyang continues to fill the gaps in its range, this time with a versatile and useful 20mm T1.9 addition to the Cine DS line of cinema lenses.

Rokinon (or Samyang) probably wouldn't object to being called the world's most famous provider of lenses for low-budget filmmaking. Other than the option of used stills lenses, they provide more-or-less the lowest possible cost solutions to glass and are widely owner-operated on shorts and music videos. Whether you call the organisation Samyang or Rokinon is largely a matter of branding. They're all made by the same outfit and they're all, including the PL-mounted XEEN range, based on stills lenses.

The reason we're discussing this is that the company recently announced a 20mm, T1.9 addition to the Rokinon Cine DS range. Sitting comfortably between the extant 16mm and 24mm lenses, the announcement demonstrates its interest in filling out the range. This sort of success is hardly unexpected, of course, in a time when big-chip shooting has exploded in popularity at all price points, but it's still nice to see that sort of dedication.

Given the variable sizes of sensors in modern cameras, especially things like the JVC GY-LS300 with its variable windowing, a case can be made for almost any focal length. Even so, 20mm is a useful intermediate option. 16mm, at least on super-35mm sensors, is really very wide, to the point where the audience may notice that something unusual is going on if anything gets too near the camera. A 24mm lens (or especially the  common 28mm option) naturally mitigates that concern, although it's still wide enough for easier interiors. Field of view isn't linear with focal length and the 20mm is closer to the 24mm than the 16mm in terms of what it can see, but it's a useful roughly-halfway house.

Performance, of course, will remain a point of speculation until we can get one to test. Stills lenses generally have fewer requirements for matching than movie lenses, as stills aren't generally put together into sequences with cuts between them, but Rokinon has always stated that the Cine DS series should be colour matched. This doesn't mean that they'll all react to flare, veiling and other things in quite the same way - no two lenses of different focal lengths could - but there have been no strident complaints from users so far.

There's nothing wrong with basing movie lenses on stills types, of course – even Panavision does it – and it does keep the costs way down, but it typically means that niceties such as consistent size, weight and control positions are overlooked. One of the nicer things about the Cine DS range is that this isn't the case: they're far from all the same size, but at least the focus and iris rings are in consistent positions, meaning that only the mattebox typically needs to be adjusted for position during a lens change. If anything, it's good to see that common, optically straightforward lenses such as the 50mm aren't any larger than they have to be, which is often a side effect of insisting that all of them are the same size: the lens which must be largest ends up being a size target for the whole range. The Cine DS glass is reasonably compact and reasonably lightweight.

The Rokinon Cine DS lenses, as distinct from XEEN, come in a variety of mounts oriented towards stills cameras (or movie cameras designed to use stills lenses). Perhaps the most sensible choice for any purchaser interested in future-proofing and long-term value would be the Nikon mount, since it's probably the most adaptable to other mounts, including the common Canon EF using very low cost adaptors. About the only thing Nikon can't be adapted to, interestingly, is PL. Adaptors exist, but involve corrective optics which increase cost, inevitably reduce quality and which anyone would prefer to avoid if possible. The XEEN range will remain the best choice for people with PL-mount ambitions and a need for consistent sizing, larger focus scales and all the other niceties of the high-end, but at that price, things like the underrated Sony Cine Alta primes become a realistic alternative, too.

Still, it appears that Rokinon (or Samyang) remains very seriously interested in low-cost lenses for motion picture work and the necessity of that work shows no signs of abating.

The Rokinon / Samyang 20mm T1.9 Cine DS prime lens will retail for €549. The stills model, at an F1.8 and without a gear-ready focus ring, will go for €499. Both lenses will arrive in September.

In addition, Rokinon / Samyang recently debuted a 35mm T1.3 cinema lens and a F1.2 stills lens that will retail for €499 and €449 respectively, also set to ship in September.