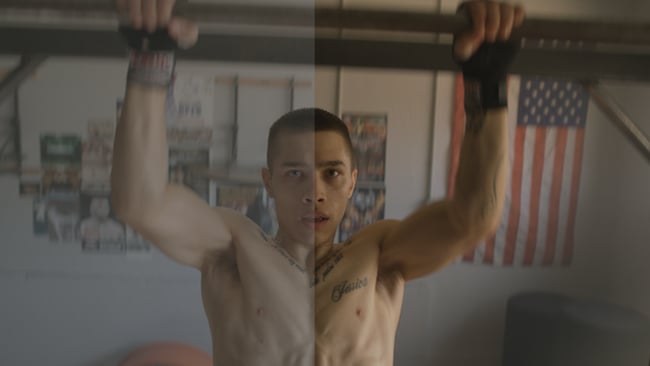 As you’ll remember from last week, Lutify.me helped Jonny Mass from Abandon Visuals make ‘The Underdog‘, a short film showcasing the new RED Helium 8K sensor in a mere 24 hours. Now it’s sharing some of the ungraded footage from the camera too.

The story so far: RED's Jarred Land lent 19-year old Jonny Mass a RED Weapon Helium 8K for 24 hours, during which time Mass managed to pull a lot of strings and call in a lot of favours to get a short film called ‘The Underdog’ made.

One of the people that ended up being involved was Edward Khoma, also from Abandon Visuals, who realised he didn’t have enough time to go creating LUTs for the job so instead bought some in from lutify.me.

“For the exterior night scene we used Opal from the cine looks category of the Professional Package for that teal and orange contrast,” he explains. “For the flashback scenes we used Cassiterite from the contemporary colour films category of the Professional Package for the more flat and warm look. In all of the main boxing scenes we used Heulandite for the blue, slightly higher contrast look.”

All of which happily means that Lutify.me also has a stack of images featuring before and after shots from the RED Helium 8K sensor, more of which you can see by following this link: First Glance At Ungraded Footage From RED Helium 8K Sensor.

Oh, and just in case you haven’t seen the film yet in its entirety, here it is below.