The difficulties of using LEDs in the Soft Light Era 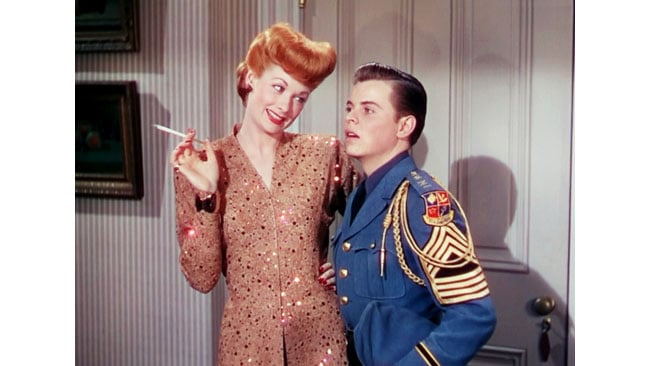 Best Foot Forward, of 1943. A redhead, a blue jacket, and a carefully-controlled pattern of hard light. Notice the multiple shadows on the door behind them.

Recent cinematographic styles have trended to using more soft light than in years past, yet LEDs may be an ill-suited means of creating that soft light.

Eras of cinematography are often readily identifiable. If a movie has a clumsy, lumpen, on-camera zoom in it, it was probably shot in the 60s or early 70s, when zooms suitable for cinema started to excite the easily-excited. If it looks like it was shot through a dirty contact lens, it was probably made in the mid-1970s, when glow and fog were such prevalent parts of camera technique that the entire decade seems to have been mired in a sort of constant pea-soup. Any production wealthy enough to be shot in Glorious Technicolor, from the mid 1930s, tended to be at pains to emphasise not only colour, but particularly blue, since the three-strip process was among the first widely deployed technology which was capable of rendering blue. Earlier two-colour processes using only red and green records (such as Kinemacolor) could not, naturally, reproduce blue, and spendthrift producers of the World War II era might as well have walked the cinema queues with a placard reading SEE THE BLUE. HEAR IT ROAR.

Happily, the more sophisticated thinking of recent filmmakers has allowed us to avoid the tail wagging the dog in this way and technology is no longer allowed to dictate content in the way it once was. As evidence of this, I propose the commendable restraint and delicacy of touch epitomised by people working in stereoscopic 3D, which, of course, entirely avoided lowbrow tricks such as waving things close to the camera in order to emphasise the effect to the popcorn-munchers in the back row. We're much cleverer than we used to be, as this clearly demonstrates, but I digress. 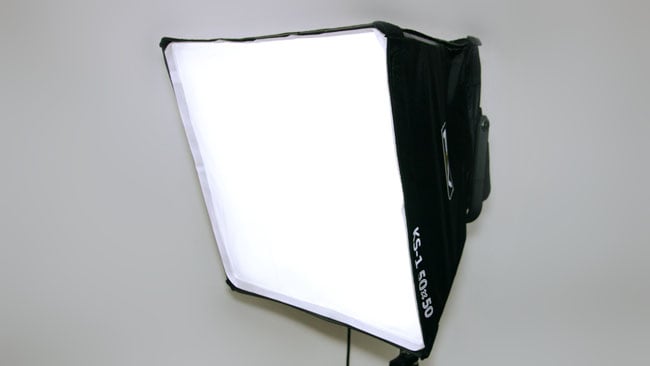 Adding this 500mm square softbox to F&V's Z400S Soft makes for a pleasant soft key for sit-down interviews,
but cuts output by a full stop.

Future film historians will probably be able to identify the cinema of the 2000s by the teal and orange, even though orange has been a popular hue for actors for quite some time. One other up-to-the-minute addition to the laws of filmmaking appears to be that nothing is ever allowed to have a shadow or, at least, no better-defined shadow than appears under a car on an overcast day. Hyperbole aside, it's hard to tell whether the modern obsession with soft light is provoked by technology, but it's certainly easier to do than it ever has been. In the days of one piece of film per primary colour, when effective sensitivity was in single digits, the idea of punching a light through diffusion was more difficult than it is now.

Even so, there's a slightly worrying trend at play here. We have much better LED lights than a few years ago, when they were limited to a few tens of watts. Now, they're pushing past a hundred watts, even for basic and reasonably affordable devices intended for use by unassisted camerapeople, and companies such as Mole-Richardson offer examples intended to replace even larger-scale tungsten and HMI deployments. In the main, though, LEDs aren't in any sense ready to replace multi-kilowatt HMIs. Yes, cameras are more sensitive, but LEDs aren't much if any more efficient than HMI and they don't come in such big sizes. It's a widely-misunderstood fact, but if you punch a bright-looking  hundred-watt LED through diffusion, thus spreading its light out into an almost 180-degree spread, you're shooting in the dark if you're more than a very few feet away.

This became clear when metering a selection of LED lighting recently. Some flat panel LEDs incorporate diffusion designed to turn the matrix of emitters into an evenly-illuminated rectangle, while others use emitters with collimating optics to create a beam that may not diverge much at all, despite being a foot square to begin with. Both approaches are perfectly valid, but they do emphasise the enormous loss of power intrinsic to diffusion; the diffused panels often achieve only 20-25% of the same brightness at any point, but, of course, they maintain that light level over a far wider angle. 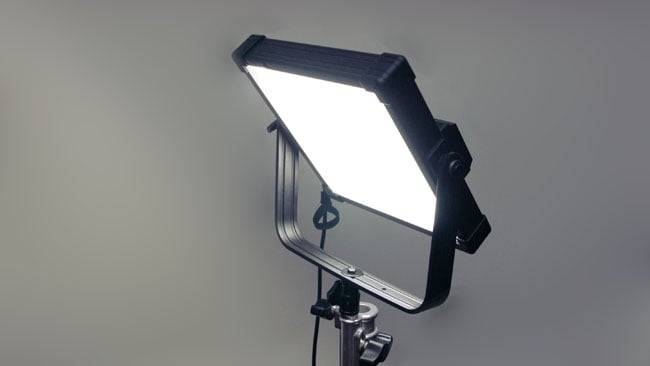 Without the external softbox, the Z400S is smaller, but still evenly diffused.
Adding diffusion directly to the front of this light won't make it softer - only dimmer.

They're not, however, any softer. Softness of light is proportional solely and only to the size of the emitter and an LED flat panel is still a foot square, whether it has built-in diffusion or not. Diffusing it will increase the beam angle and may alleviate issue of shadow segmentation, but it doesn't make the light any softer, because it isn't making the source any bigger. To do that, we need a softbox, which is actually bigger than the LED itself. The high-end look of high-end material is, in the mid-2010s, often quite identifiable as a combination of very large diffusion panels driven by very large light sources, which of course can only be controlled with very large flags and cutters. All of these require large stands, large vehicles, large crews and, ultimately, large budgets. 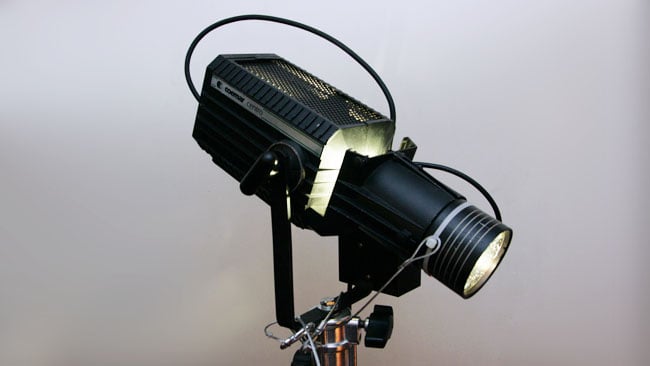 Profiles (ellipsoidals, Americans) can place light very accurately in specific places,
but camera and actors all have to be in exactly the right position.

Lighting without upscale soft sources, which can be a great concealer of sins in blocking and framing, is an entertaining exercise in precision and restraint, but it's also easier in some ways. You can cut the beam of light from a parcan with a medium-sized paperback book, while a common  eight-by-eight diffusion probably needs something even bigger than that to control it. The appearance of uncontrolled, leaky soft sources is hardly more appropriate to most cinematography than the perhaps slightly historic feel of harder light.

All the same, it's difficult to imagine much tolerance for more hard light from producers and the less-secure variety of on-screen talent, even though some of the most well-regarded stars of classic cinema were photographed almost exclusively in hard light back in the days when the image had to be inserted firmly into the film in order to be properly recorded. Keeping the light source within a few tens of degrees of camera is one obvious approach (1940s stars generally showed but a tiny shadow under the chin), but the precision control of light as people move around can make an imposition on the on-screen talent, as well. Soft sources light areas, in which the cast can move around, and most modern actors are used to this approach.

If there's an upside to all this, it's that even the highest-end productions occasionally use things as cheap and simple as polystyrene insulating board as a reflector or (painted black) as a flag. Even large diffusion panels can be made simply out of almost any translucent material. Pick a grade, ensure it's fireproof, and see what happens. Even shower curtains have been pressed into use in the past, although the presence of little blue fish printed on your lighting control accessories may impact the acceptability of this sort of approach in some circumstances.

Ultimately, though, no matter how cheap and easy it is to create, say, a panel of diffusing material eight feet square, in order to have adequate exposure, even modern cameras will require a light source on a scale that some of the most modern technologies just won't yet do.