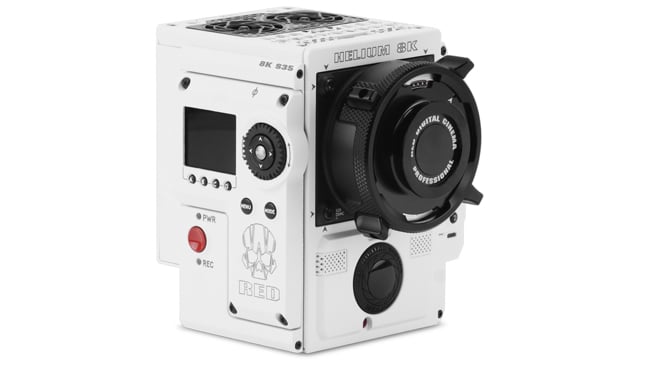 A surprise special edition RED Weapon camera equipped with the company's new 8K S35 Helium sensor went on sale yesterday, but you had to be quick to buy one as the limited run of the $59k camera sold out in 10 minutes!

You’ve just missed a chance to buy the first RED Weapon fitted with RED’s new S35 8K Helium sensor. It was announced yesterday and sold out within minutes.

The white-coloured Weapon features the new, smaller sensor that is reported to perform extremely well despite packing 35.4 megapixels into an S35 footprint.

While 8K is probably more resolution than most people have in their plans, we’ve no doubt that RED cameras equipped with this sensor will put 8K on the map for huge numbers of filmmakers, who don’t necessarily want or need to output their films in 8K but who might want the flexibility that shooting at this massive resolution brings.

They will also be able to use a much wider range of lenses because of the sensor’s smaller S35 dimensions.

The other really interesting thing about this announcement is that RED is making a big deal of the ability to shoot still images at 35.4 megapixels, and not only that, but extract those stills from moving video.

This ability, at this resolution, is absolutely transformative and we may find that cameras like this become part of serious still-shooters’ repertoires as well.

Click here to see the announcement on the RED User Forum