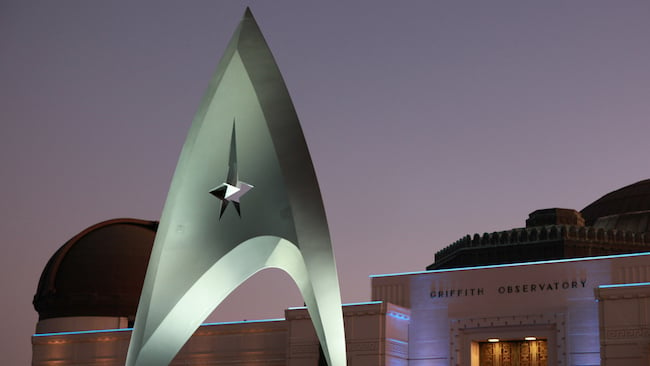 The Federation makes its mark

With the new Star Trek movie debuting in the cinemas, Joe Foster boldly goes into the tangled and rather messy genesis of the first ever Trek and the series that almost never took off.

If you know your Tribbles from your Romulans, then you’re probably aware that a little known cult phenomenon called Star Trek is celebrating its 50th birthday this year, with its celebration tied in with the latest movie instalment Star Trek: Beyond, out today, and with the promise of a new TV series next year. But what does the the 50th anniversary actually commemorate?

Well it officially marks the year that the first episode of the original series was broadcast in the US back in 1966. However when you look at the history of the production, things get a little more complicated, and its a prime example of how production is not always as straightforward as it appears to be — especially for a rejected pilot that was never intended to be seen by the public.

Allow me to explain. The first episode that was officially broadcast was a "monster of the week" style episode called The Man Trap, which beamed onto American television screens on September 8th 1966. Unusually it was actually not the first episode produced but the first to air (mainly because monsters on television were a popular fixture), with the first official episode and pilot Where No Man Has Gone Before airing as the third episode in the first season run.

Are you with me so far? Great.

What viewers didn't realise was that the franchise started its production a little earlier than that - a pilot episode was completed for the NBC network to view and judge in 1965. This particular episode wasn't even seen by the public until decades later (though parts of it were repurposed and broadcast a year later, more on that in a moment). The pilot that was originally made, and the first time that the brand of Star Trek was ever committed to TV filmstock, was an episode entitled The Cage (although it was actually changed during production to The Menagerie - more on this later).

It is mostly remembered by fans as the one without William Shatner as Captain Kirk, and instead featuring Jeffrey Hunter as Captain Christopher Pike (before the actor’s wife stepped in and declared that television acting was beneath him). Plus it featured a smiling, emotional version of the Spock character for good measure. Different cast, different characters, different costumes, but the same Trek at heart.

Initially only available via franchise creator Gene Roddenberry's own personal 16mm black and white copy that he displayed at fan conventions in the 70s and 80s, The Cage was never intended to be seen by audiences as it was actually rejected by the network (“too cerebral” - it probably should have had a monster fight at the end or something). It appeared that the roughly $630,000 budget for a 60 minute pilot of a science fiction show (though not unheard of, the genre was uncommon at that time) was a complete waste of everyone’s time. What was interesting was what happened next.

A second chance (in more ways than one)

Incredibly, a second pilot was commissioned - the aforementioned Where No Man Has Gone Before episode (though the third episode in the season run). It was then that the series was commissioned and the studios were allowed to produce more instalments. The budget was famously low (ah, those wonderful 60’s fake rocks and sets…) and one episode capitalised on the unaired and unused pilot to save money and scheduling problems (at this point titled The Menagerie) by using footage from the episode as a “flashback” in the story. This two part drama was given the title The Menagerie - Part 1 and Part 2 and the old pilot’s title reverted back to The Cage. So, in a sense, despite the fact that it was never supposed to be seen by audiences, it was. Mostly.

Still with me? Fantastic.

Unfortunately this came at a cost. The 35mm negative was cut up for several parts to be used for The Menagerie, whilst the rest of it was discarded and believed lost forever. For Star Trek’s 20th Anniversary in 1986, the lost pilot episode was released on home video. It was a mixture of the already used 35mm clips used for The Menagerie two part episode and the 16mm black and white discarded bits from Roddenberry’s personal copy.

Fortunately, in 1987 (the same year the first spin off Star Trek: The Next Generation first aired) a film archivist named Bob Furmanak discovered the discarded 35mm segments that were thought to be lost forever. This meant that in the following year the rare and (mostly) unaired pilot was finally given a proper broadcast - specifically to fill in the gap in the schedule when the production of The Next Generation was put on hold due to a writers’ strike. It was then broadcast in the UK in 1992. The Cage was also cleaned up and restored as part of the Star Trek Remastered project and shown in all its HD glory in 2009.

So in summary - The original pilot episode of the science fiction franchise Star Trek was not in fact the very first episode The Man Trap broadcast in 1966 but was a different episode called The Cage which then changed its name to The Menagerie during its production in 1964 and was shown to the network in 1965 and was not broadcast except for when parts of it did in 1966 when it was cut up and repurposed for a two part episode which was also given the name The Menagerie which meant that the original cut up and discarded pilot was given its original title back again and the second pilot Where No Man Has Gone Before was commissioned but was then actually the third episode broadcast in the first season run and the original unaired pilot was not seen in full on television until it was released on video with a black and white 16mm copy filling in the blanks where the original 35mm prints were thought lost until it aired in its entirety in full colour in 1988 (1992 in the UK) after the original discarded 35mm segments were found again.

Phew - and you probably thought modern productions were complicated...