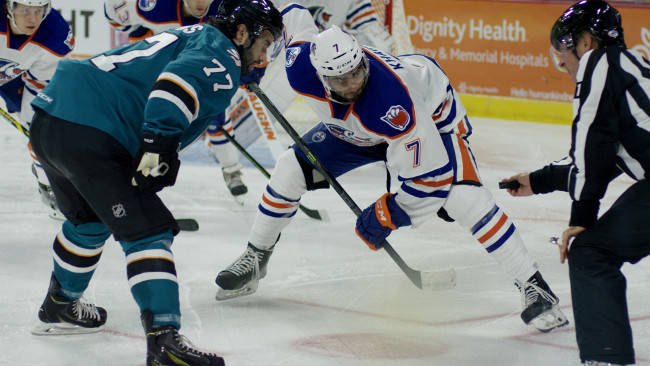 RedShark Replay: Sports videography typically evokes high-end live broadcast systems at one extreme and compact budget ENGs at the other, yet there is an argument to be made for ditching the ubiquitous zoom for a high quality set of primes.

When you think of sports videography, the first thing that may come to mind is the live television broadcast, the often highly produced product that we enjoy as we follow our favorite sports, teams and players from the comfort of our living rooms. Live sports broadcasts and their ever-increasing standards have left an indelible impression on us as viewers and videographers alike, resembling something of a de facto benchmark for all sports videography, no matter what the budget.

Of course, the overwhelming majority of independent sports videographers opt for some ENG solution, paired with a zoom lens that typically covers the standard range at least, from medium-wide to short telephoto. The rationale for this gear option should be fairly clear: an ENG represents a video camera with a form factor that supports run-and-gun usage and the zoom means the operator can crank through its range of focal lengths at a moment's notice, ensuring that a pleasing frame is just a ring turn away.

So, the matter's settled. For sports video production, it's ENG and zoom or nothing, right? Not so fast. It may be useful to broaden your thinking a bit and give some serious consideration to capturing those sporting moments with a set of primes.

When we shift from a zoom lens to a prime, the question of 'look' arises. Typically, sports videography calls for what we might roughly refer to as the 'video' look of sports broadcast. What actually constitutes this look is up for some debate, but hopefully we can agree that it often consists of multiple cameras zooming in and out of the action with much more of the frame seemingly in focus than out, typically thanks to the smaller sensors in the cameras being operated.

However, there are clear examples of the single camera, filmic look working quite well for sports videography. Those of us in the U.S. may refer to this as the NFL Films-look, named after the dramatic, cinematic recaps of NFL football games that stand in stark contrast to the broadcast. Many critics have hailed the NFL Films productions as innovative at its inception and the enduring pinnacle of sports cinematic documentary, influencing scores of other sports docu-programming, including the popular 30 for 30 series on ESPN. Of course, most of those NFL Films were actually shot on film, but the cinematic aesthetic in question transcends shooting medium.

Continuing in this tradition of shooting sports cinematically, DoP Adam Beck works for the Bakersfield Condors, a hockey team that is the developmental affiliate of the Edmonton Oilers of the NHL. Instead of rocking an ENG-zoom combo on his shoulder, Beck has opted for a RED Dragon and a set of Schneider Kreuznach Xenon FF-Prime lenses. 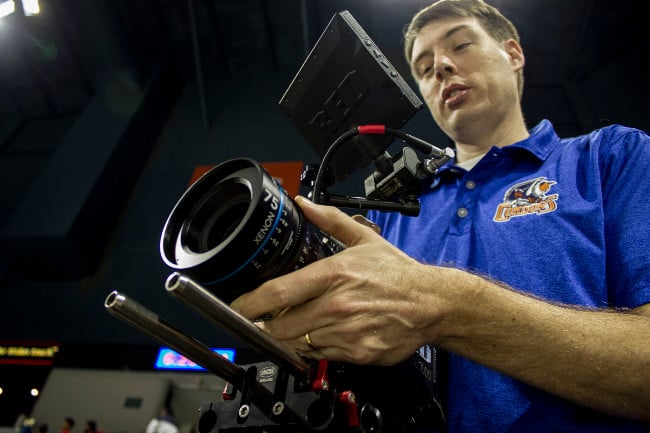 It may seem a bit odd to go the prime route, even if you're trying to shoot sports for a cinematic look. Wouldn't it make more sense to retain the zoom, even if your intention was simply to use it as a variable prime and stay on a certain focal length for a period of time? Wouldn't the benefits of a zoom in such a fast-paced environment outweigh any possible advantages of primes?

Here is a taste of Beck's thought process on the subject: "Zooms tend to be physically longer, heavier and slower. I wanted to stay as compact as possible, since I don't always have a lot of space to move. I am going for a certain look, a more cinematic approach – it's a different perspective than what you normally see."

There's something to be said for working with constraints. From Beck's explanation of why he chose a prime set, I gather that, while there are clear physical advantages to going with a prime, part of the appeal may be in winnowing your shooting options down and relying on your skill, creativity and experience as a shooter to artfully capture those thrilling moments with just a handful of focal lengths at the ready.

Often, the versatility of a zoom lens is among its major advantages over that of primes. However, there is another type of versatility that may swing the needle in favor of using primes for sports videography, namely versatility of end use.

To be fair, if a Bakersfield Condors game is televised, there is likely a traditional crew dealing with the brunt of broadcast, yet Beck's work is an integral part of the team's marketing and promotional efforts, from the 360-ribbon light/screen around the arena to the huge HD monitors over the rink, plus 4K YouTube clips and high-end commercial spots.

"I often shoot at 4K, 5K and 6K mainly handheld with a majority of the game footage captured at 96fps. My shutter varies between 90 to 180 degrees and a few places in between," said Beck. "I'm at 2.8 most of the time. I need all the light I can get for the high frame rate. Of course, 2.8 gives me a pretty shallow depth of field. Focus pulling can be difficult with a depth of six inches with the action moving so quickly. There are no focus marks for the players to hit and going from 100 feet away to ten feet in front of me, there is not a lot of room for error. You're not always going to hit the correct distance on your pull, but I consistently do pretty well."

Recently, Beck shot Connor McDavid, a budding star who appears destined for the NHL, at a Condors' practice. "I shot at 6K, 96fps with a 90-degree shutter because slo-mo was needed and also because the Condors wanted large posters made. The images turned out great and I've got a nice signed 42x24 poster hanging in my home office."

Any shooter with any real experience will agree that all primes are not created equal. Part of the advantage that primes have generally had over zooms is that of image quality, which is why excellent zooms are often described as almost as good as a prime, optically speaking. In other words, if you're going to trade the advantages of a zoom for that of a prime, it makes sense to extend that advantage as far as you can and choose the the best primes that your budget will allow. For Beck, that premium choice was a set of Schneider Kreuznach Xenon FF-Primes, which more than cover the RED Dragon sensor.

Beck calls hockey "the fastest game in sports" and it's easy to imagine just how difficult it would be to capture usable footage from a prime lens. To that end, build quality is of paramount importance, as you can be sure that manually riding focus for long durations, night-in and night-out, can take its toll on lenses. "The players move fast, the direction of play changes so the focus changes often," said Beck. "If the lens was mechanically rough, not smooth, I could not perform."

Across the Xenon line, there is a useful consistency of size and weight which makes aids in operation. "You don't have to re-adjust. When you are moving fast, you want to continue working at your best. If lenses are different sizes, you can lose the shot having to re-adjust too many things on camera."

At the Condors' first home game of the season, Beck was confronted with a shooting scenario that clearly illustrated the need for build consistency and quality across a prime lens range: "With one minute left in the game, forward Andrew Miller scored the game's winning goal and skated right to me celebrating with his teammates. I fervently pulled focus the entire time and that great moment has been used over and over again to help promote the Condors. If the lens had been heavier and I had to deal with changing the gear out, I may have missed that great shot. Size does matter when you are switching in and out. Consistency in weight and size lets me focus on capturing the content we need."

Aside from the general differences between using zooms and primes for sports videography, the Xenon primes, in particular, gave Beck that look he wanted. He was especially taken by the way the images transition from sharp to out of focus, which is an expression not only of the larger RED Dragon chip, but the optical characteristics of the Xenons.

"It's gentle, like feathering," said Beck. "The images are smoother looking. Even though the action is quick, everything just gradually goes out of focus. The image you get is unique. [The Xenons] are sharp, but not so sharp that you see things you don't want to see. They're great on skin, even on mature women. There's a little bit of creaminess. Not super warm or blue. They are just right for so many different things from action sports to narrative projects."

I may not have swayed you to completely ditch your trusty zooms for a set of primes for sports videography, but if you haven't tried capturing fast-moving sports with primes, give it a whirl. Of course, there are some circumstances where a zoom lens will be the safer and, perhaps, only sensible choice. But even seasoned sports shooters could benefit from thinking more cinematically and, who knows, your sports cinema test footage might be what lands you your next gig.