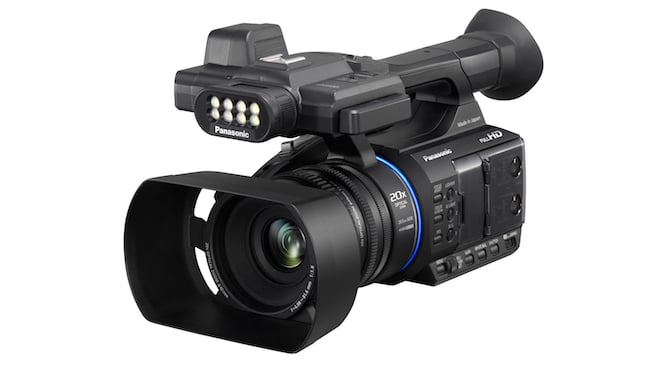 Panasonic’s latest handheld bills itself as a semipro shooter for business use with some superb low light characteristics. It has a few other tricks up its sleeve too.

The headline specs are that the AG-AC30 features a 1/3.1-inch Sensor, optical 20x zoom, and a 29.5mm wide angle lens. Beyond that though Panasonic’s latest palm-sized camcorder certainly has a couple of features that seem to be interesting enough for people in wider markets than simply its target one to take notice.

Probably the most visible thing is the LED video light, which in turn hopes to make things a bit more visible in low light for those using the unit and provides approximately 300lx at a colour temperatures of 5000K. Two filters are included: a colour conversion filter which brings the colour temp down to roughly 3100K and a diffusion filter to soften the light source.

It also features what the company refers to as professional level shooting, which introduces a neat set of features into this lower price point. This includes three manual rings (focus, zoom and iris, which adjusts from F11 to F1.8), 2-channel XLR terminals to allow for the use of pro-spec mics, cam remote, and simultaneous record and relay record with hot swap via its dual SD card slots.

Other pro-level functions invoice a histogram display for the 0.24in 1555k dot EVF, colour bar minter and zebra-pattern warnings

The company says that Intelligent Auto Focus provides better performance than that on the MDH2/AC8, in terms of speed, tracking, and the ability to maintain AF even when confronted with moving objects passing through the frame.

Design-wise it shows some neat touches, such as holes in the lens hood to enable the shooter to get a visual on the subject, but our favourite touch is probably the illuminated LED ring round the lens: blue for standby, red for recording.

“It’s time to shoot like a pro,” says the teaser video below. No word on price just yet, but then it has only just broken cover and we’ll add that in as soon as we can.