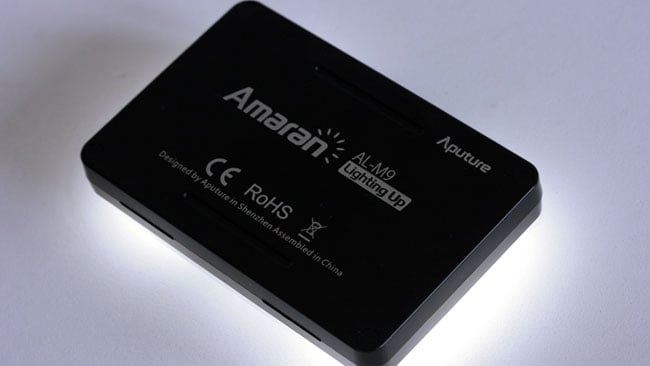 The Aputure AL-M9 back is a flat plane without controls or protrusions, making for easy duct-taping.

RedShark review: a tiny LED light from Aputure, the M9, packs quite a punch and, better yet, exhibits high CRI light output at a reasonable cost.

One of the less obvious advantages of LED is its scalability. The technology has been used in applications ranging from single-chip pocket flashlights, which can themselves have applications in filmmaking, all the way up to enormous clusters of panels tens of feet wide and involving tens of thousands of LEDs overall. Aputure has made devices at various points on this scale, particularly specialising in flat panels in the hundred-watt range, though the company also showed the COB 120t hard light, which we hope to look at soon. 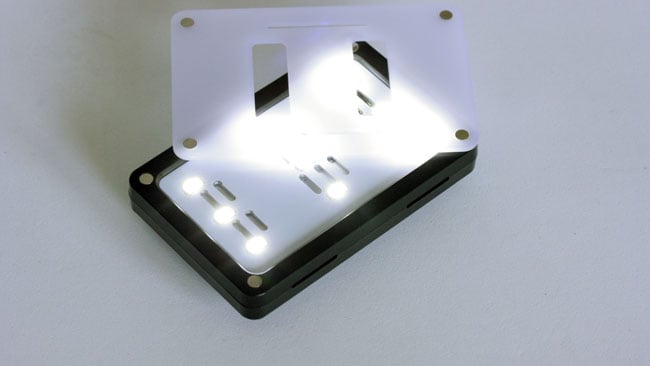 The diffusion panel is of an appropriate density and can be used to clamp gels.

The Aputure AL-M9 is part of a rather new breed of very diminutive lighting that has been made possible only because of significant advances in both LED emitters and batteries over the last ten or fifteen years. While there is naturally reluctance to use such a small source deliberately as a facial key, it's a very serviceable on-camera light. While it's pretty clearly intended primarily for that use, being supplied with a clamp for cold-shoe mounting, experience suggests that it's also handy as an easily-hidden fill in difficult locations, too. It's the sort of thing a gaffer might duct-tape to the inside of a car. 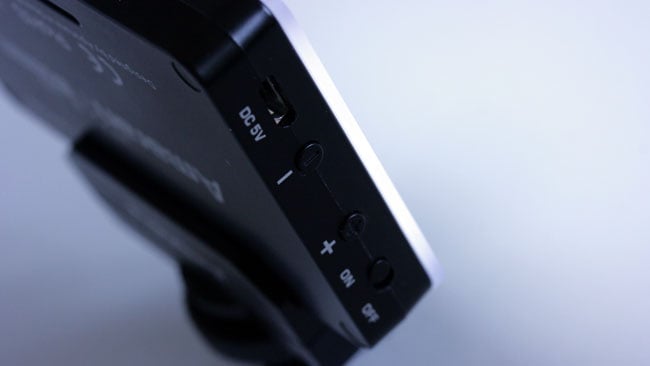 Controls and USB port are on one end.

With a fixed-battery device, it's impossible to really accurately assess the power consumption, but suffice to say that the device is more than reasonably bright. I measured over 80 footcandles a foot in front of it. While most subjects will be further away than that, it's a pretty encouraging figure. It's something roughly like a 20-watt MR16 of medium beam angle at a similar distance, although the LED produces a wider beam. Falloff is smooth with the diffuser installed; without the diffuser, the light suffers the usual shadow segmentation of multi-emitter LEDs. The density of diffusion is well chosen and practically eliminates the shadow problem with minimal effect on intensity, which is, of course, the idea. One amusing side effect of the magnetic diffusion mounts is that two M9s will hold onto one another when placed face-to-face, although I've seen one with a missing magnet that apparently just fell out of the hole in the case, so watch out for that.

Aputure has enjoyed a good reputation for colour quality and the M9 again does well, presumably using similar emitters to the company's other products. Measurements in the mid-to-high nineties for both CRI and the more critical TLCI are widely reported, including the difficult R9 assessment of saturated reds (difficult R12 deep blues are less often measured, but the spectrum graphs look reasonable). Good red performance is crucial to attractive rendering of skin tone and traditionally difficult for LEDs, which can only create red by shifting light all the way down from the blue end of the spectrum. Doing well on R9 numbers traditionally means a drop in absolute efficiency, since the process of shifting colours is intrinsically lossy, but it's probably worth it in the context of LED movie lighting. 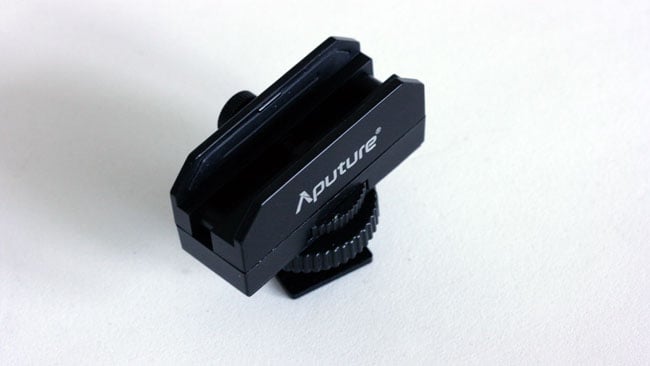 The case and cold shoe mount are plastic.

With its plastic case and cold shoe mount, the M9 is not the absolute sturdiest little device, but it's lightweight enough that it should nonetheless survive the odd drop anyway. A metal case might have made it a lot more expensive and the idea of these lights being available in large numbers and easy-to-rig is facilitated by low cost and light weight. Charging is via USB, which is convenient, but means it can't be run directly from typical 12V camera power without some sort of intermediary converter, though this isn't particularly difficult to arrange. You also can't just swap out the batteries, but then, this light is cheaper than many batteries. Run time is – cautiously – anything up to a couple of hours at full beans, although this feels like it works the batteries quite hard.

The purpose of a device like this is convenience, and the M9 has a lot of that. If there are problems, it's that a daylight LED of any stripe really can't be treated as a daylight source in the way, say, HMI can, inasmuch as filtering it to tungsten is a dicey proposition due to the odd spectral output. This may be why Aputure doesn't supply an orange tinted diffuser for this purpose, which would have been nice to see. We're definitely getting there, though, and the availability of reasonably low-cost LEDs with colour performance that measures this well is promising.