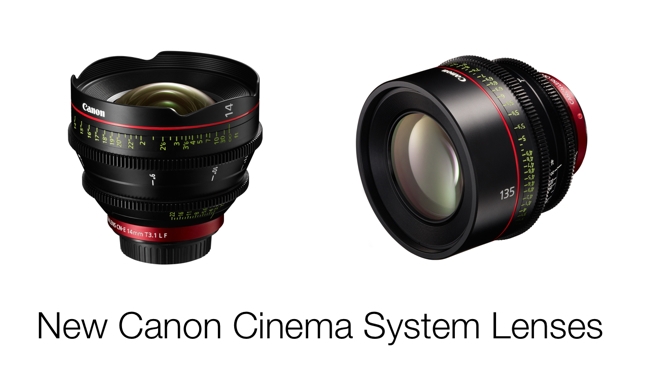 Canon has released two new lenses to for its growing Cinema EOS System. The CN-E 14mm T3.1 L F and the CN-E 135mm T2.2 L F are aimed at a wide range of uses "from low to high-end", according to the lens and camera manufacturer

Canon has formalised its presence in the digital cinematography market with its C100, C300 and C500 cameras, all aimed at the large-sensor, cinematic-look arena. The newly announced lenses will add to the flexibility of these cameras and perhaps spur the migration of aspiring filmmakers from DSLR photography, which is where  the trend towards using large-sensor cameras for cinematic production started.

Canon says that the new lenses both offer 4K resolutions, although you can see what we think of such statements here.

In technical terms, the lenses incorporate the latest techniques, including anomalous dispersion glass and large diameter aspherical lenses, with broadcast lens coatings to reduce ghosting and flare. To make maximum use of the shallow depth of field available from large-sensor cameras, the aperture diaphragm has 11 blades.

Each lens has a full-frame image circle that is compatible with both 35mm and Super 35mm formats, which means that the lenses will work with both EOS Cinema System cameras and EOS Digital SLRs.

Both lenses have markings on angled surfaces on either side of the lens barrel, for easy focus and aperture settings. The focus rotation angle is approximately 300 degrees, and focus markings can be switched between metric and imperial units.

Pricing and availability (in the UK)