The advantages of finishing the look in camera 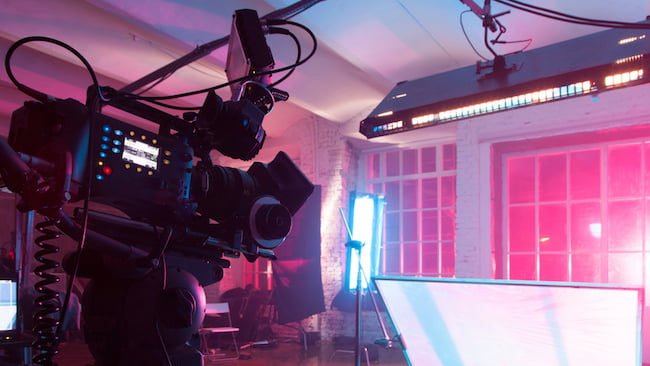 Creating a look in camera

Mark Andrew Job argues that creating the look on set — building one in the first place, then lighting it and allowing the actors to inhabit it — still makes for the best films and image quality.

Who is responsible for creating the look of a feature film and who isn't, and at what stage in production is the most effective and artful way to create the look of a feature film ? If you are a film maker like Martin Scorsese or Francis Ford Coppola then how do you approach directing a production like Guardians of the Galaxy 2, where much of the picture might be filmed in a green screen room without much of a set at all ?

In order to best understand something its best to begin with its essence. What is the essence of Cinema ? I will use the definition the late great director Alfred Hitchcock used. Hitchcock believed in what he called “Pure Cinema.” According to Hitchcock, pure cinema was the artful assembly of a series of shots to create either an idea or an emotion in the mind of the viewer. This is a pretty good definition of what Cinema is, and also an exact definition of Hollywood Cinema editing, which we editors also call “continuity editing,” or “invisible editing.”

There was a time when directors of photography and cinematographers in general were expected to know how to balance overall lighting density and colour on the set for the look the director wanted. Recently, some in production have suggested the digital tools we now have in post are much superior, therefore, the need for on set colour and density balancing is not necessary. We should flat light and “record” the images on the set and “process” them in post in order to achieve the desired look the D.P. and director want. Many now consider this method superior to the traditional approach of allowing the D.P. to balance density and colour in camera during principal photography.

Some might refer to this new method as “the engineering principle approach.” The engineering principle dictates we do it because we can, but, perhaps we should also consider wether we should be doing it ? Although, it is certainly true digital colour correctors are amazing tools which can do precise and unlimited modifications to image density and colour balance, we must also ask ourselves some essential questions – Do classical Hollywood motion pictures, such as Gone With The Wind, The Red Shoes, Black Narcissus, Becky Sharp, or The Wizard of Oz need to be colour and image density corrected ? Would the overall “look” of these motion pictures be superior to what they are today if they were timed and balanced in Davinci as opposed to relying on D.P.'s to craft the look in camera ? Is the relatively basic colour and density adjustments available in photo-chemical post production versus digital post production the result of the elder technology's limitations, or do they exist as such because it was thought any further adjustments in post were deemed to be unnecessary ?

If your answer to these questions is “Yes,” or “Maybe,” then, perhaps, we should look further into what film makers were doing back in the 1930s and 1940s which produced such excellent, even breathtaking results, before concluding it is time to discard such antiquated ideas in favour of the software modification practice we now accept daily in commercial film production ?

The age of Technicolor

Herbert Thomas Kalmus was born on November 9th, 1881 in Chelsea, Massachusetts and was an orphan by age 11. Herbert was removed from School at 16 and found work in a carpet store in Boston, where he saved up his earnings to the point of $500 and was able to gain admittance to the Massachusetts Institute of Technology (M.I.T). At the time, M.I.T. was the only school which would accept the young Kalmus as a student. Later, Kalmus graduated M.I.T. with a Bachelors Degree in Science. Herbert met his wife Natalie Dunfee while a senior at M.I.T. Natalie Kalmus would later become one of the most powerful women in Hollywood due to a sideline interest her husband was working on for several years – A method to add colour to motion pictures.

The trade name “Technicolor” was derived from the word, “Technique,” according to Kalmus. The idea of adding colour to moving pictures was largely regarded as an unnecessary affectation at the time to what was considered by the Hollywood film industry to be a perfected medium in black and white. Dr. Herbert Kalmus founded the Technicolor Co. on November 19th 1915 and had a railway box car as the first location of operations. It would not be a perfected and commercially successful process until 23 years later, when another young entertainment entrepreneur named Walter Elias Disney would take a chance on the 3 strip subtractive colour process to shoot one of his Silly Symphonies called Flowers and Trees. The resulting animated short captivated audiences and won an Academy Award for best short subject animated picture in 1932. This was the big break Technicolor was looking for to prove it was not simply a novelty process.

It might seem to the reader, we are discussing two entirely desperate subjects, but for the purposes of the point, we are really talking about the same thing – Creating the look of a movie entirely on set and in camera, which was key to the success of the Technicolour process. The essential point about Technicolour was it was managed from start to finish as one which had its colours and looks carefully built entirely in camera – as opposed to a look created essentially in post as we have now in digital Cinema.

Lighting was done via huge 10,000 Watt Klieg lights due to the very slow film sensitivity speed being used (ASA 5-8)(Gone With the Wind had what they called a “fast” film @ ASA 10) The colour was balanced by using coloured and graduated gels in front of the lights, as well as tests with different colour costumes and set design. Technicolor would send in their own specially trained Director of Photography and camera operators, as well as a controversial technicolor consultant, who was supposed to guide set and costume design for best results in colour.

This Technicolor consultant was the (by now) ex-wife of Dr. Herbert Kalmus, Natalie Kalmus, who was universally disliked by producers, directors, and set designers, as she was strongly opinionated and notoriously difficult to work with. However, it was also evident Ms. Kalmus was not incompetent and did in fact, know much about set design and colour balance. What were the results the Hollywood studios were able to achieve with this system and cinematography practice You be the judge!

Today, we have moved into the dawn of an entirely new technological process and general approach toward feature film photography based on creating a look much later on in post with digital software. It used to be entirely the province of the D.P. to create the overall “look” of a picture. Now, the image can be scrutinized by everyone on set, and in post from the film editor to the effects compositor, to the producer, who thinks they have a better idea of how their picture should look than the D.P. does. Now we can “capture” the images we want on set and complete principal photography in a third of the time it would have taken normally, and we don't have to mess around with film. “Film is cumbersome,” said George Lucas. So which is more desirable an approach to production and creating the look of a movie? Creating the look on set and in camera, or “recording” the images against greenscreen and “processing” them entirely in post to “engineer” a desired look ?

What you can do with 'cumbersome'

Ralph Richardson ASC shot the Hateful Eight in 65mm Ultra-Panavision with 50 year old MGM-Camera 65 Anamorphic prism lenses and created the entire look of the picture on set and in camera. The result? Please take a look at the closeup of “the Mexican,” facing the character of the “bounty-hunter,” played by Samuel L. Jackson in the barn scene of the picture and get back to me.

It would seem to this independent observer that most of the engineering principal of filmmaking is being generated by the plethora of comicbook movies being produced by the Hollywood studios, whereby, you have an esoteric story, which has no bearing in reality to anything. Actors perform to pictures of the other characters pasted onto sticks, while they are alone in a greenscreen room ! There is no such thing as “mise en scene,” in these new pictures, as there is no “set or scene,” for the cinematographer to light, or other actors necessarily extant in frame for the other actors to play off of.

So what does the Director of the picture do again?

In fact, I'll advance this argument to its logical conclusion. What need have we of actors anyway? Why not simply digitally scan our actors and bring back all our favourite dead ones? Producers could negotiate with their estates to make sure proper licensing of their images are secured and now we can shoot Samuel L. Jackson in Guardians of the Galaxy 3 with John Wayne. Why not? We have the technology, right? Why not create a synthesised Gone With the Wind Technicolour “Look,” and simply apply it as a realtime CC effect in Media Composer? What are we waiting for?

I believe there is still great art and entertainment value in choosing to build a set, light it, let the D.P. setup the look in camera and allow the director to be able to “mise en scene” with actors who can play off of each other on camera. Perhaps the best way to view the new tools is just that: another thing that can help with the aim of painting a moving portrait of light to tell the story the director wants to tell…

On set image by shutterstock.com