And the winner of the Panasonic DVX200 is... 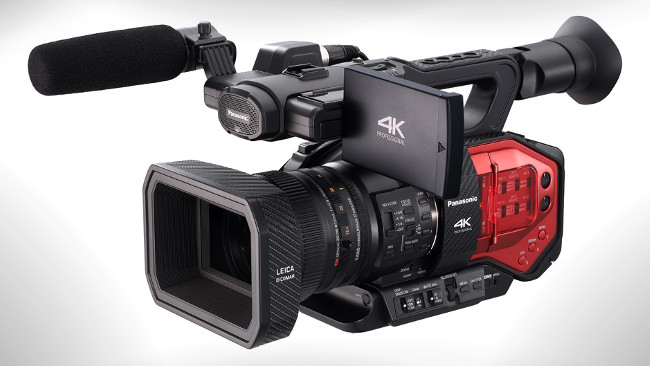 The winner of the grand prize draw of a Panasonic DVX200 was Matt Goodman from Lausanne. We spoke to him to get his first impressions of the unit.

At the turn of the calendar year, we promoted a drawing for a new Panasonic DVX200. For those unfamiliar with the DVX200, the fixed lens 4K camera in a compact ENG body style harkens back to one of Panasonic's most beloved cameras of yesteryear, the DVX100, which debuted around 12 years ago and brought with it the revolutionary feature of 24P SD recording onto its miniDV tapes. Today, the DVX200 is an appealing option for run-and-gun shooters and anyone who would trade the ability to change lenses with the all-in-one advantages of this type of camera.

We caught up with the winner of the DVX200 drawing, Matt Goodman, who is a video editor for EPFL, Center for Digital Education at the Swiss Federal Institute of Technology, Lausanne. Although Goodman works in post by trade, he is an experienced shooter who was happy to share his experiences with the DVX200 thus far.

RSN: What was your impression of the camera when you first received it?

MG: When I first unboxed the DVX200, the first thing I thought was "Man, this thing looks just as cool as the publicity photos!". The red side panel, large slide out screen and a plethora of functional buttons makes for a pretty impressive looking machine. For some, the faux carbon fibre finish might be a bit much, but personally I like a bit of bling. It has a good weight to it (I prefer a heavier weighted camera), the plastics feel durable and the buttons, switches and selectors feel of an equally high quality.

RSN: Have you used the camera since then?

MG: I've done the usual 'new camera shakedown' tests pointing it across the living room saying things like "Ooo look at the bokeh" or "Do I prefer scene setting one or two?" But I have also had the chance to do a couple of simple shoots for work. I work at the EPFL (Ecole Polytechnique Fédérale de Lausanne) in a team making e-learning courses called MOOCs (Massive Open Online Course). Quite often we go and shoot experiments in the labs on campus and these particular shoots were for a course on Material Sciences which involved smashing things to test their fragility. The perfect opportunity for trying out the 120fps at HD quality. For me, using the camera was very intuitive the lens is great, the button layout feels like home and the menus are clear and easy to use.

RSN: What do you think are the best things about the camera?

MG: The best thing about the camera is its versatility. I like having a camera with me that I know I will be able to cope with a range of different shooting situations and the DVX200 fits the bill for me. The large range of features like the VFR, shooting 4K, SDI out and shooting IR gives me the confidence to know that I can charge the batteries, put the camera in my bag and go.

RSN: What sort of difference has the camera made to you?

MG: It has made a great addition to my kit that fits in seamlessly with the work that I do both professionally and personally.

RSN: Would you recommend the camera to other content creators?

MG: I don't think the DVX200 is going to be for everyone. I imagine a lot of people might want something smaller or lighter. But for those that are looking for a versatile, run-and-gun camera that can do a lot of things well, then I would definitely recommend it.

RSN: What do you think makes this camera different from others on the market?

MG: Well, we've all read on the DVX200 fact sheet that talks about it being a "sophisticated cinematography camcorder" and  "the world's first 4/3-type large format, 4K/60p camcorder to feature an integrated zoom lens," and that's all great. But with all the tech to one side, what stands out most for me was the quality of the build, the quality of the lens, the thought that has gone into its ease of use and its wide range of functions. I'm not expert on all the cameras at this price point, but from my experience, it is not everyday that these four points get rolled into a camera that looks this great.

Thanks to Matt Goodman for sitting down with us and giving his perspectives on the DVX200.

Have you shot with the Panasonic DVX200? Are you considering purchasing one? Please share your thoughts and experience with the DVX200 in the comments below!