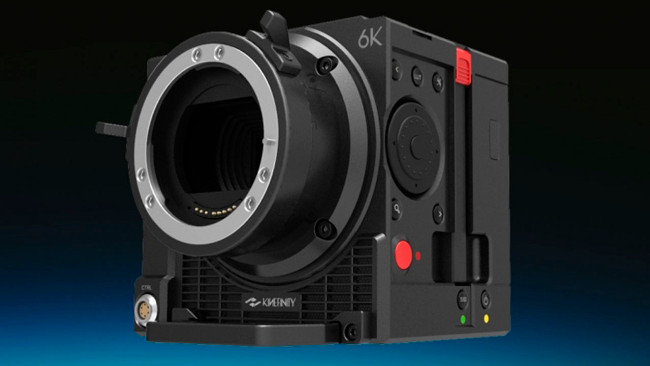 Kinefinity only has a single booth tucked away at the back of Center Hall, but it has managed to unveil a camera that may intrigue budget-conscious shooters and productions.

We've actually been tracking Kinefinity for some time now, but although its products seem well-regarded by users it has still barely penetrated the European market and is practically non-existent in the US. However, the new camera it has in tow at NAB 2016 may change that as it checks a lot of boxes for shooters.

The new cameras in question bear the TERRA moniker, with a 6K model set to debut in two months and a 5K version becoming available in three months. Of course, the headline grabbing news is likely the marriage of these resolutions with the eyebrow raising price points of $6K and $5K, respectively.

The 6K variant also shoots at 4K, 3K and 2K, while the 5K version also has 4K, 3.6K and 2K modes. Thee frame rates increase as the resolution diminshes, up to 225 fps and 200 fps at 2K resolution for the 6K and 5K models. The 6K model is rolling shutter only; the 5K model has dual shutter modes, allowing selection of rolling shutter at a purported 15 stops of dynamic range and a global shutter mode at 13 stops – both cameras have a base ISO of 800, traveling up to 20480.

The rather diminutive cameras (they are smaller than a RED Weapon) support all flavors of Prores 422. But shooters may opt to go raw, using the company's proprietary 12-bit KineRAW visually lossless codec, which boasts file sizes at about a half or third of cinemaDNG, recording to a 2.5" SSD. It should be noted that this is a modular system and inclusion of the KineBACK add-on (for XLR audio connectivity, SDI ports, time code in and out, DC outputs and more) would raise costs a bit, let alone other accessories.

I visited the booth, witnessing a group of cinematographers peppering the rep on hand with a bevy of workflow questions and suggestions. To his credit, the rep handled the heat admirably. One of the commenters brought up the need for a downsample, instead of a crop, when shooting at lower resolutions. The lack of downsampling might be a non-starter for some, as overcranking and dropping resolution would necessitate either lens changes or physically moving the camera back to keep frame, not to mention changing the look. A downsample option might be available in a future firmware update, but I got the impression that, while possible, it might not be that likely.

The group of shooters suggested button locks for the menu, which the rep enthusiastically agreed should and would be implemented. This was a meaningful moment to this observer, as it was a clear indication that the company is taking suggestions to heart, even if some won't be feasible to implement while maintaining these price points.

The company is currently accepting preorders for the TERRA cameras. We should keep in mind that, even with the aforementioned concerns and others that may arise, there seems to be a lot to like and a lot of camera on offer. We're communicating with the company to hopefully receive TERRA 6K and 5K units for review.