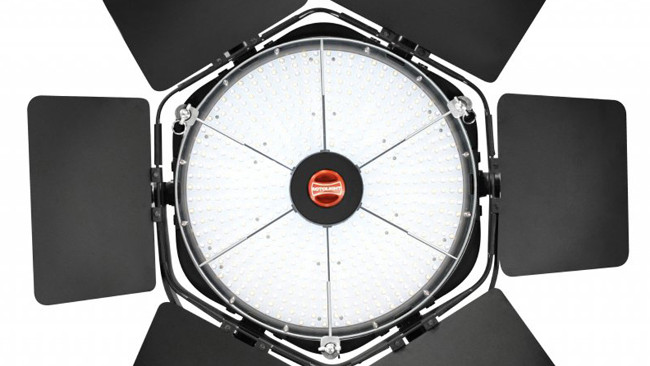 As we've discussed a few times here on RedShark, there are problems with stroboscopic light sources on rolling shutter cameras and the results aren't pretty. One solution – the most universal one and perhaps the best overall – is for the industry to move away from the rolling shutter. Another, perhaps more interesting one, is for those flashes of light to be synchronized to the camera, so that the problem doesn't occur and also so that we don't miss the flash altogether, as is entirely possible with either shutter type.

Synchronisation is one of the features of Rotolight's new Anova Pro LED, announced at NAB. The company's characteristic hexagonal LEDs have enjoyed a good reputation as an LED of useful output pattern and good colour quality for some time and the new version boasts considerably more output (the paperwork says 46%), as well as the customary DMX controllability. Perhaps recognizing that its products are widely used in the newsgathering and documentary markets, Rotolight is also promoting a 10% weight reduction, something that sweating cameramen the world over will recognize as a bigger benefit than is perhaps obvious if you haven't spent any time hauling camera gear up hills.

The improved electronics provide for other features, too, including one the company refers to as "true aperture dimming," providing a straightforward aperture display calculated from information about the distance to subject and the configuration of the light. It's perhaps a bit of a niche feature, but demonstrates a certain understanding of the real-world problems where it's nice to be able to ask the lighting device for a change of output in f-stops, rather than percentage, as is more usual. It's possible to see LED lighting as quite a simple device, give or take the underlying physics of the light-emitting diode, but these sorts of features illustrate where things can go given sufficiently capable electronics.

The headline feature, though, is probably the synchronization. Brief flashes can achieve higher peak output than continuous modes, suggesting that the limiting factor in output is, as with most LEDs, one of thermal management. The feature is backed up by a few interesting and genuinely useful modes intended to simulate emergency vehicle lights, welding, electrical arcing and other phenomena, which can cause problems with rolling shutter cameras. It isn't an entirely new idea, but it's still reasonably rare and the tendency of the industry to continue releasing rolling shutter cameras means it's likely to be relevant for some time to come.