Dramatic updates for URSA Mini and new products from Blackmagic 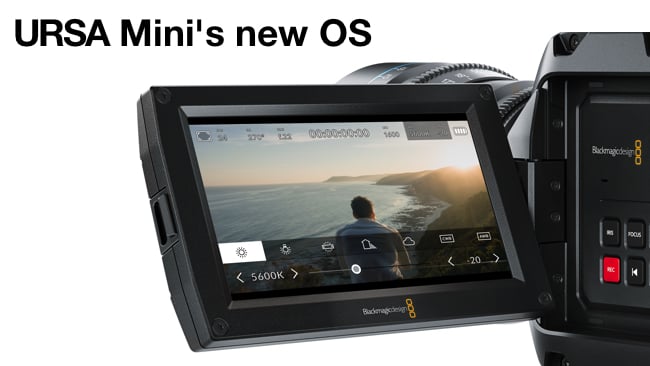 The URSA Mini has had a complete software rewrite

A total software rewrite for URSA Mini, a 7" 4K Video Assist and a radical new way to distribute UHD video are some of the highlights of Blackmagic's announcements at NAB this year.

It's almost become customary for Blackmagic to announce new cameras at NAB each year and this year - well, no. There's no new camera, except that, with a completely new operating system for the URSA Mini, you have the beginning of a new camera *platform* and that's enough to make the URSA mini feel and behave like an almost completely new camera.

I met with Grant Petty on the Sunday before Blackmagic's big announcements. The first thing he said to me was that Blackmagic now has so many products - and has so many in development - that they have held back some of them rather than pre-announce them at NAB. There aren't many companies who would be able to either say or do this plausibly, but it makes sense in the case of Blackmagic.

And there's no need to have any new cameras.

The URSA Mini 4.6K has only recently started shipping and the camera is immensely upgradable, so it has a long life ahead of it.

The Ursa Mini is now effectively a Platform. This is important. Here's why.

First, Blackmagic has written a new operating system for the camera. It's not just a firmware update; it's a completely new software stack, rewritten from the ground-up. It looks different too, needing fewer clicks and far more usefully laid out on the camera's screen.

Even superficially it's easy to see that this is a vast improvement, and it possibly hints at more to come, because the current version is in Beta, and I suspect that this is only the beginning of a long and fully upgradable journey. 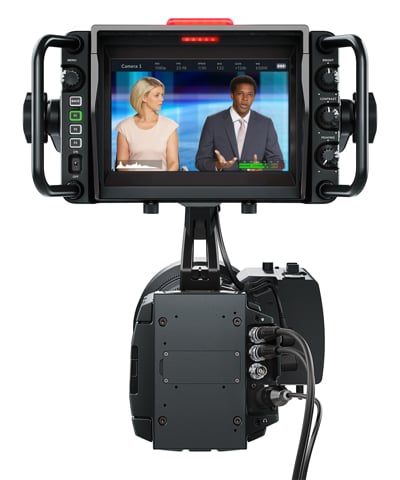 Another sense in which the URSA Mini is now a platform is that it is possible to use it as a fully functional studio camera. There's a new 7" high resolution display that has all the controls and features needed for a high-end TV production. The Viewfinder has a set of physical dials and knobs as well as customisable function buttons that can be used for zoom, false colour, edge focus and more.

There's a flexible mount that attaches the viewfinder to the camera, and the whole thing appears to be extremely well engineered. It has an LED Tally indicator with clip-on perspex camera numbers for easy camera identification.

Camera Update 3.2 repurposes the URSA mini as a true studio camera. We think this could be fascinating as it's the first time that a cinematic large sensor camera with a wide dynamic range has been positioned as a studio camera.

As we expected, there's a new Video Assist, this time capable of recording 4K. It looks the same as the earlier video assist but bigger, with a 7 inch full HD monitor. It can also has dual UHS-II recorders that are compatible with the latest high performance SD cards. They're fast enough to record UHD up to 2160p60. Files are saved as 10-bit 4:2:2 in ProRes or DNxHD.

Really good news in our view is the Video Assist 4K's audio recorder which has two mini XLR inputs with 48V phantom power. With a noise floor of -128dBV, this should be a very quiet recording system.

If there's one thing that's holding back the adoption of 4K in the home, it's the thorny problem of how to distribute content. Netflix is the default answer here, but what if you shoot a wedding or an event and you want to distribute the content immediately after the show? At present, in 4K, you can't. It's a growing trend that owners of 4K TVs (in some shops, over 80% of new TVs are 4K-capable) are desperate to get 4K material.

This is the issue that new Duplicator 4K (above) is designed to solve, and it does so by having 25 recording slots for SD cards. These are now available for just a few dollars or pounds, and can easily be considered as a low cost distribution medium. The Duplicator can record to all the inserted cards at once, as the content is coming in live. Video is encoded as industry-standard H.265, and owners of TVs with a SC card slot (or with a USB socket and an SD card adaptor) can insert the card into their TV and watch the 4K UHD material. Of course most laptops come with SD slots as well, so there's wide compatibility.

The units can be cascaded for even higher volume duplication.

We like this product because it seems an elegant and instant answer to a tricky problem.

The duplicator is available now for US$1,995.

We'll come back to these products in more detail in the near future, but finally I just want to mention that DaVinci Resolve 12.5 is now available in public beta. It has over 1,000 enhancements and 250 new features. These include more editing tools, enhanced colour features, better HDR support and new effects.

I'm convinced that Blackmagic is taking the right approach by not rushing new products out for a trade-show. They don't need to do this. They're so big now that they have their own gravitational field. What they do causes ripples in industry spacetime, and they're very aware of that. This measured approach will work well for them.