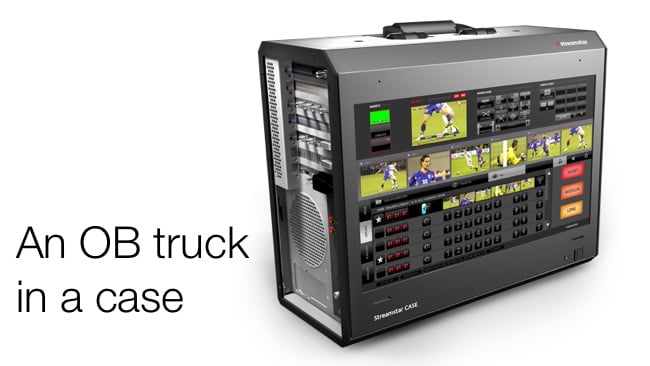 The Streamstar CASE 710: All you need to run a six-camera broadcast

New products, such as Streamstar’s CASE series, are changing the way that the industry looks at producing and streaming live sports content.

One of the fundamental, underlying truths about the broadcast industry, even in the current multichannel, multi-device, TV Everywhere and rapidly evolving media landscape is the pre-eminence of live television and sports in particular. Indeed, as an example, a recent analysis of the US market revealed that 93% of the top 100 live TV programmes in the country in 2015 were sports, and competition for sports rights amongst broadcasters and other outlets has led rights costs to track double digit inflation for the past handful of years.

Technically, the intimate relationship between pay-TV and sports has also meant that the field has been the testing and proving ground of the majority of broadcast innovation over the past years. All of which leads to a temptation to think of sports broadcasting as the sole province of huge OB trucks running 30 plus cameras with a myriad of super slo-mos, wireless connectivity, specialist cameras and more.

But it doesn't have to be that way. The same innovation that has driven the very top end of production also means that sports events can now be broadcast and streamed with much cheaper but still extremely capable kit indeed.

Streamstar's Case series is a case in point. These offer four and six camera systems perfect for sports and are effectively nothing short of an OB truck in a box.

The Case 710, for instance, is a professional, multi-camera, live production and streaming portable studio designed for single user operation and capable of handling six live 50 or 60fps HD-SDI camera inputs (or six IP inputs - this is future-proofed for future productions). What's more, it also enables replays and slo-mo on all six of those channels, and has a brace of functions available to the operator/director including Dynamic Replay Camera Switching and Sequential Replay Playback with Automation to make sure that they can switch between all the action without missing a beat.

It has its own built-in character generator, and there’s input for Streamstar’s innovative SCOREPLUS production software, which adds a live character generator application for real time sports scores and lets the production team run timers, titles, lower thirds ,game info text and much more. There is also integrated JVC camcorder remote control, while an optional intercom and tally system elevates the functionality even further.

None of this would be of much use though if the unit wasn't easy to operate by a single person, but happily there’s been a lot of thought that has gone into the UI aspects of the production. A touchscreen built into the case gives full control over the Streamstar SW production software, allowing a director to cut between shots in realtime and slo-mo and cue up clips for slo-mo by assembling mini-playlists at the touch of a finger.

H.264 encoding allows for 1080p streaming output at a maximum 10Mbps, and it’s this that is the key to the new paradigm of sports production happening out there: IPTV. Outside of the Tier 1 market — the NFLs, and the EPLs of the world — there is a huge and fecund second tier of events looking to maximise their exposure: everything from sports that don’t traditionally get much traditional broadcast time such as equestrian, orienteering, water polo etc, to individual clubs looking to maximise the engagement of their fan base.

Internet streaming is a perfect fit for these types of sports properties, but the economics don’t make sense if they have to factor in expensive OB facilities and large crews. A single box solution, such as the Streamstar Case, which is available from €9,950, can give production companies and rights holders a real foothold into the market and help them produce ESPN quality content but at costs set several magnitudes lower.