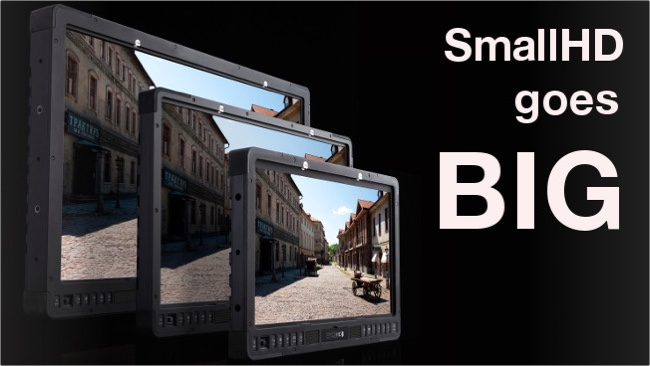 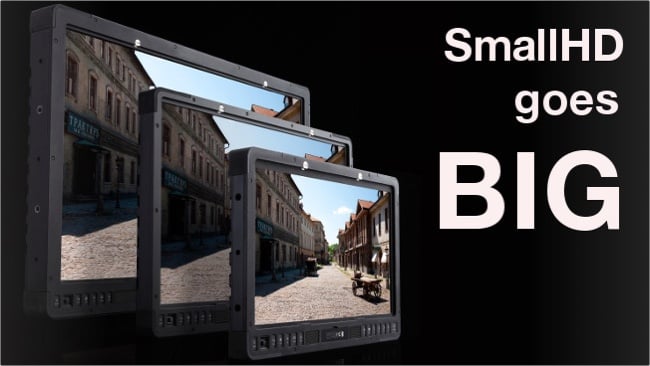 SmallHD surprises with the introduction of new high dynamic range production monitors that are anything but small.

Last year, SmallHD, maker of popular professional compact field monitors, used NAB 2015 as the launching pad for its Sidefinder system, which paired its 501 and 502 series full-HD (1080) 7" monitors with an innovative swing-out holder, allowing the pairing to function as an electronic viewfinder (EVF). We positively reviewed the system last October (check out the review HERE).

This year, SmallHD has made an unexpected move...to much larger monitors.

The new monitors, which will be exhibited at NAB, carry 1700, 2400 and 3200 series monikers, which directly refer to the available sizes (17", 24", 32"). Prior to this announcement, SmallHD featured, well, small monitors suitable for on-camera operation. These new monitors has SmallHD going into new directions for not only sizing, but also features.

The company is billing the monitors as "the first-ever line of daylight-viewable HDR production monitors" at their respective sizes, sporting up to 1500 nits of brightness. As a point of comparison, the 502 monitor, which is often used in sunny conditions, is only capable of 400 nits.

The inclusion of high dynamic range displays makes these monitors an attractive option for productions that are increasingly adopting HDR workflows. Of course, SmallHD outfitted these monitors with software to enhance the HDR functionality, such as an HDR preview, multi-view mode for use with multiple LUTs and 10-bit color processing and scopes.

We're still awaiting pricing and availability, which should be announced sometime in the second quarter of 2016.

It may seem strange for a brand named SmallHD to debut large monitors. However, if these devices help satisfy the need for affordable onset HDR monitoring, then I'm sure professionals will overlook that weirdness!

For more information, check out the press release on Page Two!

Big Monitor News from SmallHD at NAB in booth #C6025

SmallHD goes big, unveiling the first-ever line of daylight-viewable HDR production monitors in 17-inch, 24-inch and 32-inch sizes.  Designed to outlast years of abuse, every monitor housing is milled from billet aluminum—an industry first—and holds a 3mm thick polycarbonate screen protector that is user-replaceable.  Right out of the box, these monitors will drop straight onto a C-stand, table or cart, and the built-in “RapidRail” system enables quick mounting and powering of third party accessories, making wireless setups particularly easy.  All this plus unprecedented brightness at up to 1500nits make for a true “shoot anywhere” package.

“Our customers have been asking us to make large displays for years,” says Wes Phillips, SmallHD Co-Founder.  “It’s obviously a major departure from our on-camera monitors, but we’re still focusing on the same key principles:  ruggedness, daylight-viewing ability, color accuracy and ease-of-use.  That, plus some truly amazing software tools and game-changing accessories, really set these monitors apart.”

Unlike other systems that require a computer and pricy software to calibrate accurately, SmallHD production monitors introduce a built-in Color Intelligence Engine that enables them to automatically calibrate by self-generating a 3D calibration LUT for the display, based on data received from a USB-connected color probe.  This process eliminates cost, clutter, and wasted time, while providing huge confidence in the color accuracy of the display.

ColorFlow gives users added flexibility when it comes to managing post-production looks and previewing HDR during a shoot.  Looks (in the form of 3D LUT files) and HDR can be applied and compared side-by-side to the raw SDI and HDMI signals using the multi-view function.  Independently, a separate LUT can be sent downstream via SDI and HDMI to a client or director who requires a polished look on their monitor.  Finally, any active LUT will be documented when the image capture button is pressed, placing the captured image and the corresponding 3D LUT next to each other on the user’s SD card—the perfect reference point for the post-production house during the color grading process.

The custom flight case holds every accessory needed, and has even been designed so that wireless systems do not need to be removed from the rear of the monitor when stored.  The monitors’ built-in top handle, table stand and C-stand mount, plus the optional sun hood, polycarbonate screen protectors, Gold Mount and V-Mount battery plates, USB color probe, power cables and signal cables all pack comfortably and quickly into the protective case, ready for instant deployment on set.

These production monitors take advantage of the intuitive user interface pioneered in SmallHD’s 500 and 700 series on-camera monitors, expanding it further to support high-end workflow.  Pages are a single button press away, giving instant access to 4 custom tool presets.  LUTs can be activated and deactivated instantly via the dedicated LUT button, just like the waveform and the multi-view features.  The UI’s speed and simplicity will allow users to shoot faster with increased confidence.

For more information visit www.SmallHDR.com
###
About SmallHD
Founded in 2009, SmallHD has made a name as the leading innovator of on-camera monitoring solutions for professional cinematographers, videographers, and photographers worldwide. Creators of the world’s first high definition on-camera monitor, SmallHD continues to push the envelope of what’s possible in an on-camera display by combining advanced cutting-edge technology with accessible pricing.