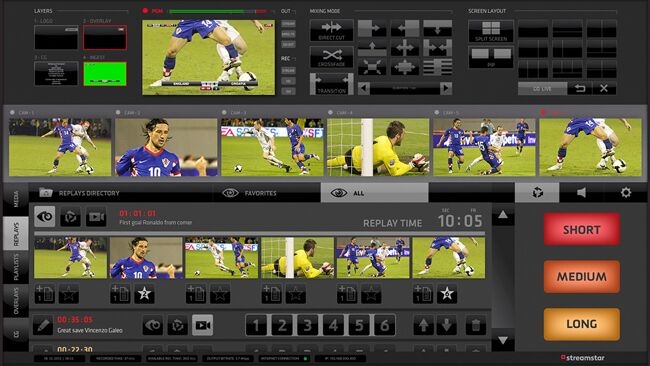 The User Interface for Streamstar SW 3.0

Streamstar has announced version three of its live production and streaming software ahead of NAB.

Streamstar has completely embraced the idea of a virtualised production environment with a virtual live production switcher that is also able to stream video of live events. They've adopted a methodology that's completely new for live production. It means that a single operator can produce a live TV program, complete with slow motion playback, graphics, and streaming the final output.

Particularly clever is the way that the operator can line up clips for slow motion replay - effectively into mini playlists - and version three takes this notion even further. Specifically, the software can now cut between multiple cameras while playing slow motion clips, play back sequential clips from a single touchscreen tap, and instantly create mini playback playlists.

Streaming capabilities have improved with the ability to output MPEG-TS streams with RTMP and SDI out.

Streamstar's close collaboration with JVC means that up to six of JVC's streaming camcorders can be connected via IP and remote controlled directly from Streamstar's user interface.

Streamstar software 3.0 applies to the entire product range and is a free upgrade for existing customers.

More information is available from www.streamstar.com.

Read the press release in full after the break

Redwood, California – March XX, 2016 -- Streamstar®, a pioneer developer of advanced live production and streaming tools, has shattered the tradition of clunky and complicated streaming systems with a fresh, affordable and intelligent platform easily operated by one user with minimal effort and training. At NAB, the company will highlight Streamstar SW 3.0, its newest software version and a key component in a product suite designed to bring professional quality streaming and live production capabilities to a broad audience.

“Streamstar’s solutions are a direct result of customer input,” explains Radoslav Toth, Streamstar CEO. “We listen to users and design simple features that address exactly what they need to achieve broadcast quality, television-style productions without all the bells and whistles that require additional manpower, complicate operations, and add to the price. It’s really quite extraordinary and truly cost-effective; a solo operator can control production, recording, streaming and replays - all after a very short learning curve.”

Streamstar offers an extremely efficient and flexible path for multi-camera production streamed from a compatible Windows PC. An intuitive user interface and touch-screen control makes easy work of each task and speeds the process, from switching a camera to creating a PIP configuration. The system also operates over IP with the remote controls built into the new line of JVC streaming camcorders.

The platform’s highly functional design is reflected in Steamstar SW 3.0, to be unleashed at NAB2016. The new software, ideal for any production, and perfect for sports and Houses of Worship, will be demonstrated in Booth SL 5520 and Booth N 8635 -7.

“The new software version is not only very user-friendly, but adds significant functionality, control and numerous replay, graphic and streaming features for applications requiring sophisticated production values from a simple system,” added Toth. “We are delighted to launch Streamstar SW 3.0 at NAB, a show that draws the world’s most creative and demanding professionals seeking cutting-edge solutions.”

NEW GRAPHICS FEATURES
4 channels of DSK with transparency support the many graphics capabilities of the system. In addition, an internal character generator is now included to effortlessly create lower thirds, subtitles, crawls and text objects. Graphic templates are provided for speed and ease-of-use.

NEW STREAMING CAPABILITIES
Designed to greatly expand the range of production capabilities and applications, the system will now be able to simultaneously send MPEG-TS streams with RTMP and SDI-OUT.

NEW JVC CAMCORDER REMOTE CONTROL
Close collaboration with JVC has resulted in full integration of the manufacturer’s streaming camcorders in the Streamstar Live production software for remote operation. Functionality of up to 6 JVC camcorders connected to a Streamstar system is controlled directly from the software’s user interface.

“A whole new world of remote production possibilities is now available to a vast cross-section of organizations, both large and small. Streamstar enables users to do everything faster, easier and saves money. Just imagine what you can do! The future is now,” Toth proclaimed.

Streamstar SW 3.0 is included throughout the entire Streamstar product range. Upgrades are available at no charge for all existing Streamstar customers.