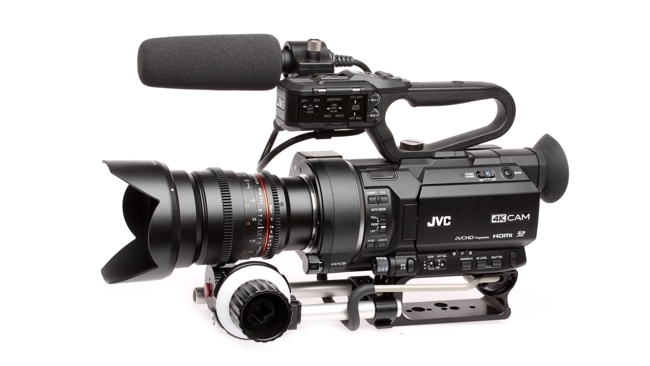 Available via a free firmware upgrade due in April, the new slow motion mode records HD footage at up to 120 frames per second.

And that's pretty much all we know about it. Apart from going on to say that "the technology also drives the Prime Zoom feature, which enables fixed-focal (prime) lenses to zoom in and out without losing resolution or depth of field," JVC's announcement about the update then just goes on to detail the improvements made back in October when the camera's big v2.0 firmware update hit the servers.

"Other features include the J-Log gamma setting, which expands dynamic range by 800 percent with film-like latitude and a built-in HD streaming engine with Wi-Fi and 4G connectivity for live transmission to hardware decoders or content delivery networks (CDNs). The camera records 4K, HD and SD footage in a variety of formats to dual SDHC/SDXC card slots," JVC concludes simply.

The 120fps capability for the GY-LS300 joins that already announced for JVC's fixed lens 4KCAM models, the GY-HM170 and GY-HM200, which have already been upgraded to it via the recent firmware v2.04 release. The effectiveness of that you can see via some sample footage from the GY-HM200 below, but we really recommend turning your speakers off for this one as it is set to what could be the most annoying music ever recorded.