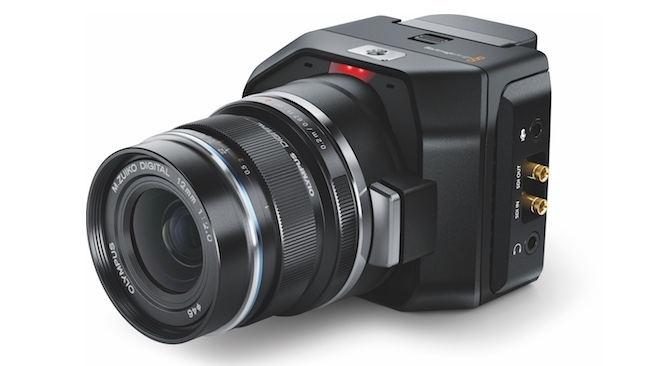 The Blackmagic Micro Studio 4K camera, a unit that packs a sizeable punch for something camera roughly the same dimensions as your computer mouse. By Iain Churchill-Coleman.

When a package about as big as a (small) box of chocolates arrived at the RedShark offices last month, we secretly hoped it contained our valentine confectionary. It didn't, but we weren't actually that disappointed to find it contained the 'world's smallest UHD studio camera', Blackmagic Design's Micro Studio Camera 4K.

Because of its size, the body is about as big as a tennis ball and weighs around 300g without a lens, the rigging and positioning potential of this camera make it perfect for a myriad of production applications, including fixed positions in the television studio (gratuitous overhead hob shot anyone?), educational facilities, reality TV sets, moving vehicle mounting and pretty much any live event going. It could even be considered a valid unit for high-res CCTV applications! Shooting UHD and HD resolutions running at 24 through 60fps (up to 30fps for UHD) standard format flexibility is built in, as expected.

The lens mount system is MFT, but with the appropriate adapters, PL and B4 (utilising control) format lenses can be attached, should you be lucky enough to have access to glass like that!

With PTZ robotic control output and camera image control over SDI via the ATEM vision mixer (using DaVinci Resolve color module), having a local operator behind the lens isn't necessarily required. If you don't own an ATEM unit, LANC/S.Bus CCU protocol are supported. Connectivity comes in the form of micro SDI i/o supporting 10-bit 6G signals, 2-ch embedded audio and analogue audio in. There's even an on-board mic for extra production convenience and application.

The camera setup was a breeze. At RedShark we've been using BMD's HD Studio cameras and the menu structure was a familiar place straight away, simple and clearly laid out. We made all the initial setup we required in seconds, without any need to reference the manual (which is thoughtfully included on an SD card in the box). We connected a small Panasonic lens and hooked up the HDMI to a 4k screen, with camera parameter overlay and histograms displayed – simple! A Video Assist monitor screen and a small disk recorder would turn this solid, well designed unit into a fully blown broadcast camera rig. If you want to shoot handheld, connect the back mount battery, a hand grip mount and a small lens and off you go!

Priced at a fraction under £1000, you could certainly elevate your production in new and exciting ways with one of these units, not only in the quality of the images you'll get, but the overall creativity of the shot.