Why would Canon use MJPEG for video in the new 1DX MK II? 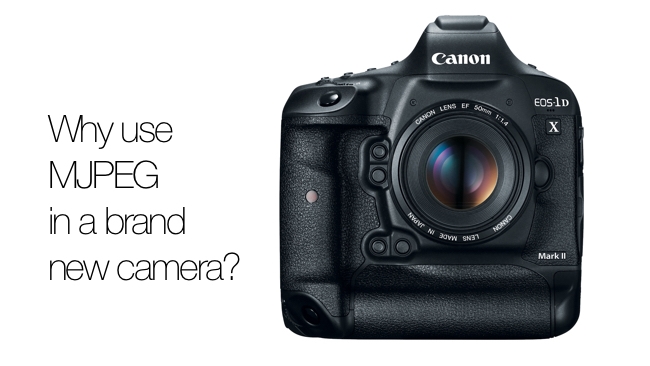 Now that the 1DX MK II is announced, the debate about whether DSLR video is alive or not will be revived with new vigour.

The new camera doesn't point to any obvious conclusion to this debate, though, and will probably divide opinions, as it already has between our New York-based writer, Ned Soltz, and me, a big fan of the original 1DC (which now appears to be an extinct camera designation, as the new 1DX MK II has all the video features - and more - of the previously more expensive "Cinema" model).

Just to clarify: Ned doesn't like the way Canon has retained the MJPEG codec for 4K video in the new camera. I agree with him that the codec is as old as the hills, but it is, nevertheless, a high quality compressor, still used universally for still pictures, and while this means you're limited to short 4K shots because of the file sizes, it is an I-frame only (ie intraframe) codec, which will work with everything, and which will give rich-saturated pictures right out of the camera. This is exactly what I want as a default; I'm not a fan of complicated log workflows when I just want to make a video (as opposed to a film, where a longer workflow might be more acceptable).

Ned makes the point that Canon could have used the XF-AVC codec used in the EOS C300 MK II Cinema Camera, which is a perfectly reasonable thing to expect. In fact, they may introduce it later as a firmware update, although I think that's probably unlikely. But for people that will choose the 1DX MK II over the EOS C300 MK II - in other words professionals who primarily shoot stills but occasionally need quick access to cinema quality 4K recording - then MJPEG still seems like a valid and reasonable choice. Well, to me, anyway.

There’s no doubt that Canon wants serious, regular filmmakers to gravitate towards their EOS Cinema cameras, which undoubtedly lead the way with modern feature, and which, with the C300 MK II can give some of the much more expensive cameras a very credible run for the money. And it is probably with that in mid that they’ve re-endowed the EOS 1DX II with MJPEG. (Actually the 1DX I I was never capable of 4K recording. That privilege was reserved for the 1 DC, which some claim was the same camera but with different software that enabled the 4K).

By retaining a fossilised codec on the 1 DX II, Canon is making the statement that this is a camera for stills photographers who occasionally need to make video. I think it really is as simple as that. And you know what? It works for me.