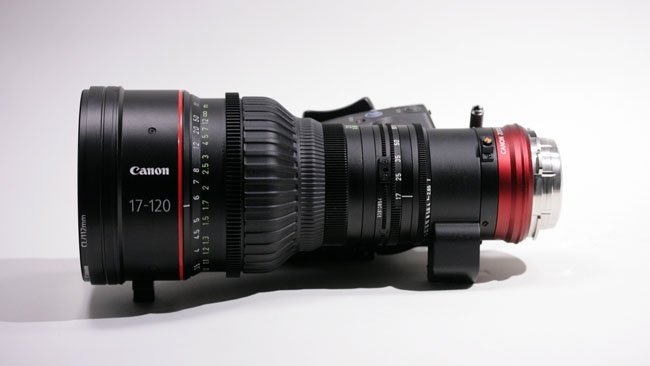 We've talked a lot, recently, about the availability of suitable lenses for handheld shooting, given the number of super-35mm cameras that now exist in form factors that are suitable for that sort of work. Last year, we looked at the Fujinon 19-90mm Cabrio zoom in conjunction with AJA's Cion camera.

Canon's alternative to the Fujinon 19-90mm

It's long past time that we also look at that Fujinon's principal competitor: the Canon CN7x17 (17-120mm). Both are short zooms covering big-chip cameras, they're promoted as being ready for 4K work (that is, they have reasonable contrast at a high enough MTF) and, crucially, they each come with a servo grip, making them suitable for off-the-shoulder work. They're also both expensive, even by the standards of small-chip, 2/3-inch broadcast lenses, which themselves are generally well into five figures. 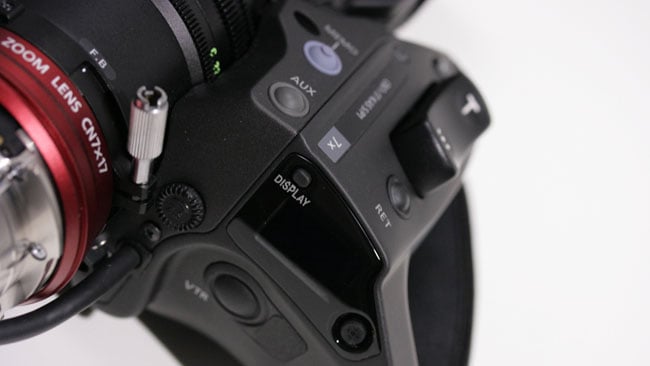 Before we get down to brass tacks, the first thing to make clear is that I'm not here to shoot charts and attempt to separate devices based on absolute performance. At these prices, all lenses are essentially good enough that the differences are barely relevant, although someone will disagree. It's impolitic to say so, but at this level, if you can't get a decent picture out of it, the problem is not the equipment. What's more, at these prices, the small details start to matter. One not-so-small detail is that the Canon is fractionally wider on its short end and reaches out to 120mm on the long, which, given the nonlinear relationship between magnification and focal length, means it feels a lot longer. The caveat is that Canon's lens ramps a towards t/4 at the long end, darkening noticeably beyond about – perhaps not coincidentally – 90mm, the point at which the Fuji hits the end stop. 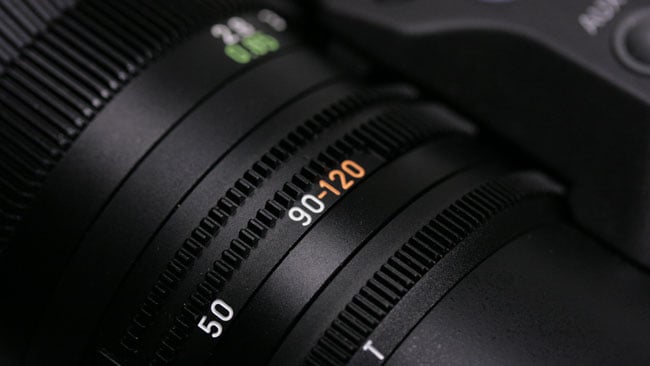 Aperture ramps slightly beyond 90mm, but the extra focal length is worth it.

This is fairly normal behaviour for a fast, lots-to-one zoom, of course; ENG lenses often do exactly the same thing and a lens designed to provide a constant stop over such a long focal length would end up being ridiculously bulky. Given that the purpose of a lens like this is to provide maximum capability in a single, easily-toted package, this seems like a sensible engineering compromise. 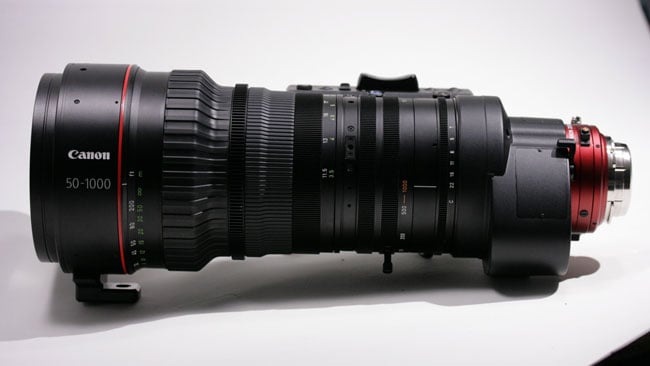 The mighty CN20x50 is a wildlife cinematographer's dream

Speaking of bulk, I'm going to wedge another lens into this equation – Canon's mighty CN20x50, which they supplied unasked-for alongside the CN7x17. This reminds us that both Fuji and Canon's ENG-style big-chip lenses are part of a fleet, with 30-300mm and 14.5-60mm options also offered in the CN range. Naturally, the 20x50 is a specialist device indeed, being the best part of eighteen inches long and weighing in at over six and a half kilos. The main reason I shot only very briefly with it is that Canon supplied only a trembling C300 camera, with no accessories, which was clearly inadequate to support such a beast without risking significant harm to the PL mount. 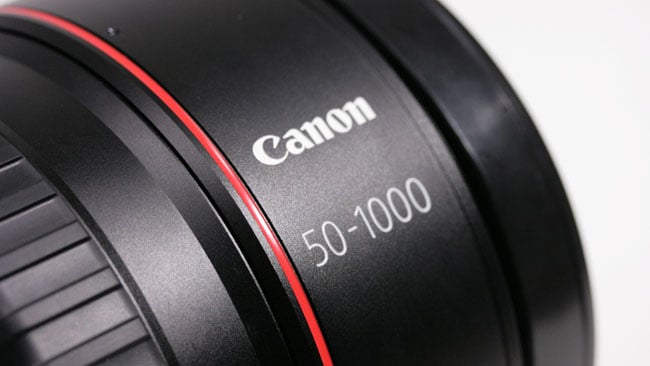 Naturally, this lens is a tool for the deadly-serious wildlife cinematographer and relies quite heavily on the sensitivity of modern cameras, being limited to a t/5 at the widest end and t/8.9 at the long. A servo module is included, although the provision of a rocker control implies a degree of hand-holdability that probably doesn't really exist with such a piece of equipment. I shall expect hoots of derision from experienced feature film camerapeople who, being used to anamorphic zooms which can only be carried by two large people, would consider this thousand-millimetre monster a lightweight, but it'll still be necessary to build the whole outfit on a sturdy set of 19mm rods to make it practical. Either way, with the 1.5x extender in play for an effective focal length of 1500mm (at commensurately reduced stop), it becomes possible to take spectacular pictures of things which are very far away. 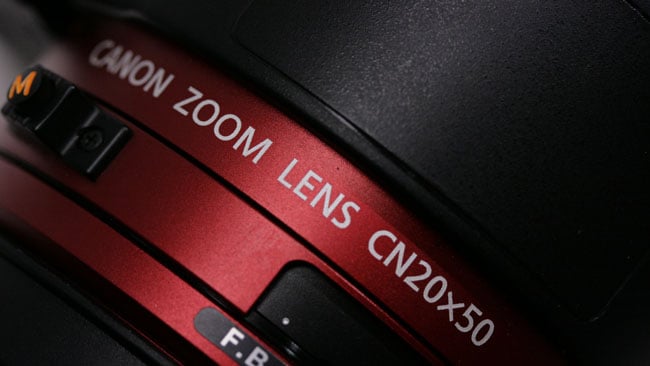 The CN20 offers a 1.5x extender for those moments where 1000mm isn't quite enough.

It is, incidentally, impossible to take pictures of things that are not at least somewhat far away without using the macro setting, as the minimum object distance in conventional mode is more than eleven feet. The performance of the 20x50 at maximum telephoto, with the extender in, wide open, does suffer from some degree of glow and flare as any lens would when operating at its absolute maximum performance, but it's entirely within the realms of normality. 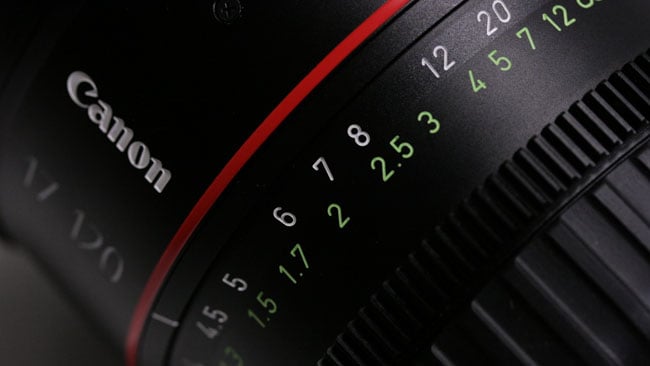 Both Canon lenses lack precision focus marks, which is a pity at this price.

While Canon's CN range is promoted as being for 'cinema' use, whatever that strictly means, there are a couple of design decisions of the CN7x17 lens that are the products of an ENG mindset. First is the fact that the focus rotation is short – about half a turn, by my estimation – which is a very, very good thing. The difficulty of self-focussing on 35mm film was partially down to the high resolution and optical viewfinding, which, in the very best cases, can betray mistakes the film won't necessarily see. However, it's down to the fact that 35mm-format movie lenses often have enormous focus rotation, sometimes almost a full turn. Feature film people love this for its precision, but the lone camera operator would struggle, without quintuple-jointed wrists, to get the lens to the desired spot fast enough, accuracy concerns aside.

The other thing about focus on both these lenses is that there are no precision markings for focus distances, just numbers, although they're in both traditional and metric units of measure. Again, this is typical for an ENG-style lens and the short focus rotation means the marks would be packed closely together at the far end, but this omission feels inappropriate on a lens this far from the bargain bin. The lens becomes slightly less general-purpose inasmuch as feature film people like marks to line up on if there isn't time to tape a lens out.

The cost of doing proper marks can be quite high, since individual examples generally need to be specifically measured and engraved on a unit-by-unit basis, a time-consuming and labour-intensive process. Even so, the plaint feels justified – at this price point, that's the sort of thing we're paying for. The Fuji, by comparison, has proper markings, although its shorter focal length makes things (fractionally) less critical at the long end.

Breathing? Well, it's a zoom, but again, no more than on a similarly-specified ENG lens. Personality? Precious little, but again, this is supposed to be a general-purpose device.

As an expensive lens that is nonetheless the sort of thing that self-employed individuals might conceivably own, the last thing many owners will want is brightly-coloured flare imposed on every frame. That's what filters are for.

It's much bigger and heavier than most ENG lenses (including the Fuji) and people used to performance down to f/1.3 will be disappointed, but that extra long end may make the decision for a lot of people. It's available in both PL and EF mount, with significant electronic connectivity according to both Canon's protocols and Cooke's /i technology, although there's no word on aftermarket mount interchangeability. One might reasonably worry that the EF mount would be physically insufficient to the job of holding such a lens down, anyway, and especially in a shoulder-rigged configuration.

What this does highlight is the need for an option of broadly similar capability that's not quite so much gold. If your clients can afford it, though, the Canon CN7x17 is a very reasonable answer to a commonly-asked question.