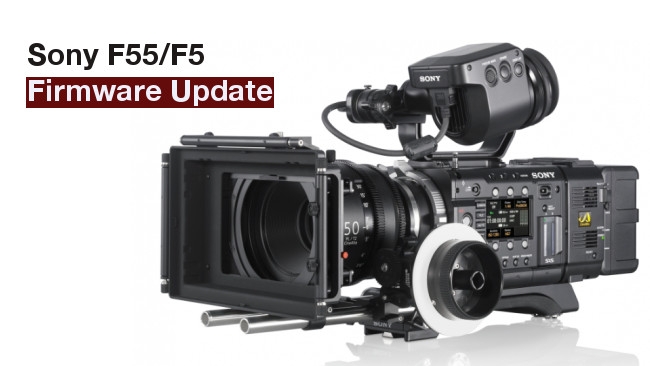 Sony keeps the firmware updates coming, this time adding improvements and features to the F55 and F5 cameras.

Last week was a big one for Sony firmware updates, beginning with version 3.0 for the PXW-FS7 and, now, version 7.01 for the PMW-F5/F55 cameras (though technically version 7.0 never released due to a last minute issue, requiring a minor revision to v7.01).

In addition, a few bugs were squashed, including failure to apply a gain setting when recalling a scene file via remote controller, as well as a situation in AXS RAW and SxS simultaneous recording in which the internal SxS recording continued after pressing the Stop button.

F5/55 users have long complained about needing to go deep into camera menus for many settings despite the operator's side display. Version 7.01 brings Quick Menu which allows exactly that – quick selection of virtually every setting that an operator would need.

Pressing the Option button on the camera invokes Quick Menu in the sub display. This is divided into six possible sets of operations (see the visual below): Project, Monitoring, MLUT, Media, Viewfinder and Others. Press the appropriate button to select the operation set. 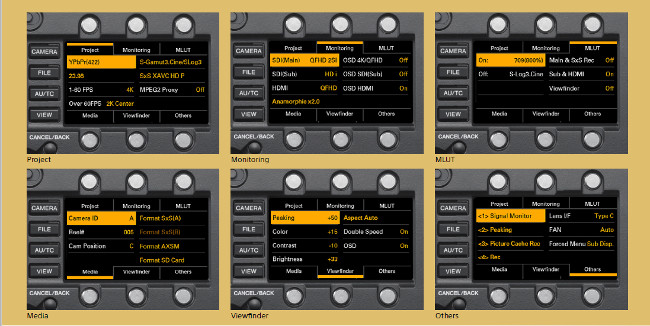 The highly-intuitive choices allow selections to be made quickly and without needing to dig deeply into Sony's historically-dense menu structure.

Sony says it makes sense to extend the Zebra's full range and I heartily concur. If Zebra settings under prior firmware never extended below 50%, how would one be able to expose an 18% gray card for Slog2 (32%) or Slog3 (41%)?

As we prepare for HDR TV, we need to be able to shoot in the widest possible color gamut for DCI 4K or UHD deliverables. This is now demanded by producers gearing up for the HDR market. Note that Rec 2020 is only available in Custom Mode. The S-Gamuts (except for S-Gamut3.Cine) available in CineEI mode are actually wider color gamuts than Rec. 2020. Hence, there is no need for that option in CineEI mode. Those needing to shoot in CineEI mode for Rec 2020 delivery should shoot in S-Gamut3, for the widest possible gamut.

Again, Sony is responding to a user base requiring the ability to shoot 4K 59.94p, while also needing a simultaneous record of MPEG2 50Mbps 4:2:2 or 10 bit 4K/UHD 4:2:2 XAVC. Simultaneous recording is now available and the timecodes on the dual recordings will match.

It is important to note that changing shooting modes of the cameras between Custom and CineEI modes still requires going into the main camera menu via viewfinder or external 'dirty' monitor.

Along with the firmware announcement, Sony reiterates its commitment to further firmware and feature development for the CineAlta line, with "exciting announcements" to come in the near future.

Firmware v7.01 for the PMW-F5/F55 is available for immediate download from your region's Sony Professional site.