Another look at the headline-grabbing Sony FS5 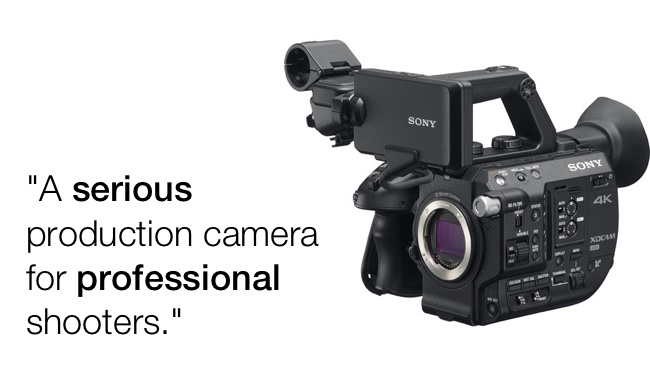 Peter Haas finds Sony's FS5 to be an ambitious, compact, versatile camera designed for professionals who need a ready-to-go solution.

I couldn't believe the size of the box that was delivered to my office. I had heard the FS5 was tiny, but found myself a little astonished by the camera I produced from the tiny square of cardboard and bubblewrap. The shape of the camera looked familiar and it suddenly struck me that the FS5 form factor was basically a more petite rendering of the renowned FS7.

Assembling the camera was straightforward and intuitive. I really appreciated the cable guides built into the body of the camera. It was clear that Sony wanted to make the camera as flexible as possible when it comes to additional accessories, so a majority of the connections are universal standards that would allow me to attach my own set of monitors, EVFs or external recorders.

The battery compartment caught my attention; a large inset space on the rear of the camera places the battery further-in than other similar sized cameras. This is great for two reasons: first, it keeps the battery weight towards the center of the camera (this is good for ergonomics!) and second, the camera supports larger, longer lasting batteries, such as the BP-U90.

Despite its size and weight, the FS5 feels like a camera ready for field production. The build quality of the camera is surprisingly sturdy and certainly places it in the same durability wheelhouse as its larger siblings.

As I stated above, this camera is really well balanced. With the center of weight just forward of the battery compartment, I could easily use this camera as a forward-help handy-cam or pressed up against my shoulder for additional balancing.

I found myself using the viewfinder more often than not when operating the camera handheld. Making a two-point contact with the eyepiece and the hand grip was more than enough to balance the camera, so my left hand could flutter over operating the lens and changing any settings on the fly.

The operator side of the camera has a button for just about everything you'll need to access during a production and skillfully makes use of the limited real-estate of the tiny camera.

Typically, on smaller form-factor cameras such as this, you have all the buttons crammed together, which makes for a precarious situation when you find yourself needing to quickly tweak a setting. On the FS5, buttons are generally grouped by functionality, with settings you'd typically desire to be more 'locked down' during a shoot (such as iso/gain, white balance, and shutter) separated enough from the more 'dynamic functions' (things you might find your self adjusting during operation, such as iris, ND filter, etc.).

I was delighted to find that other settings, such as color profiles and activating the slow & quick motion functions, were also easily accessible by buttons. It is very obvious to me that Sony put a great deal of research and thought into the design's layout.

The one thing that felt out of place was the record button the handgrip. After investigating all the buttons and zoom tally, I understood better how my hand was supposed to sit on the grip, but it was against my natural inclination; my hand felt as though it had to twist ten or twenty degrees more than I typically would expect with a grip so similar to an Aaton. I found this strange, but was able to adjust to it after a few hours of shooting. This might have also been an artifact of the closeness of the grip to the body, something easily remedied by an extension arm.

For storage, the FS5 utilizes two SD card slots, which in my mind is another example of the camera's tilt towards flexibility and standards. They are easily accessible on the rear of the camera with limited intrusiveness to the operator. The dual slots can be used as continuous recording for long shoot days or as simultaneous recording to create instant backups of your cards.

While the FS5 works wonderfully as an on-the-go field unit, the camera functions well as a compact "studio" camera as well. In this case, I found it operates best tripod-mounted, with the top handle removed, and attached to an external recorder, such as the Atomos Shogun (more on this in a moment).

I'm extremely pleased with the images coming out of the FS5. The colors and dynamic range are fantastic, particularly when shooting in one of the various flavors of S-Log. I was delighted by the variety of options and adjustments available, along with the fact I could save somewhere in the order of 12 profile presents (all easily accessible through the side panel buttons).

I believe the camera is capable of pleasing both shooters looking for cinematic images as well as those in search of a more traditional look. The 24p mode is pleasingly cinematic; silky, vibrant and expressive (honestly, I can't wait for FilmConvert to release a set of color profiles for the FS5). The 30 and 60fps shooting modes carry on the classic Sony look of immediate, sharp, high fidelity images that users have come to expect.

While shooting at 4K, the camera samples 8bit 4.2.0, but you'd never know it. The images are mind-boggling good, thanks to the science behind Sony's advanced codecs. The addition of an external recorder that supports 4K, such as the Atomos Shogun, makes the 4K mode truly shine.

In HD mode, we get broadcast ready 50mb, 10-bit video with 4:2:2 sampling. The images are stunning and blow competing cameras in the marketplace out of the water. While one could easily use an extra recorder for additional settings (say a 220mb, ProRes 422 HQ file), I found myself extremely satisfied with the XAVC codec.

The slow-motion capabilities of this camera are nothing short of jaw-dropping. While extremely high frame rates (anything beyond 60fps) has limited, albeit variable recording time and quality depending on the frame rate, I couldn't believe the quality of the images I was recording at 240fps. This is something I've never seen before in camera of this size and price.

A quick comment about "artifacting" issues: It has been brought to my attention that some users of the FS5 have been experiencing some noise artifacts while using the camera under 'low-light' conditions. This issue has been noted by our editors here at RedShark and Sony has issued and official statement regarding the situation. After using the camera for over two weeks, mostly indoors, under relatively low-light conditions, I've personally yet to experience any of the issues that have popped up on a few of the online forums.

In conclusion, I found that the Sony FS5 excels greatly in two areas:

First is ergonomics; does the camera handle well? Sony really nailed it with form factor on the FS7 and it certainly carried that over to the FS5. It's rare to find a camera that can so fluidly (and comfortably!) shift between handy-cam and shoulder-mount styles of shooting.

Second, the flexible nature of the FS5 allows the shooter to have a finite control over the resulting image. This goes for both the aesthetic qualities and technical specifications, making it a serious production camera for professional shooters.