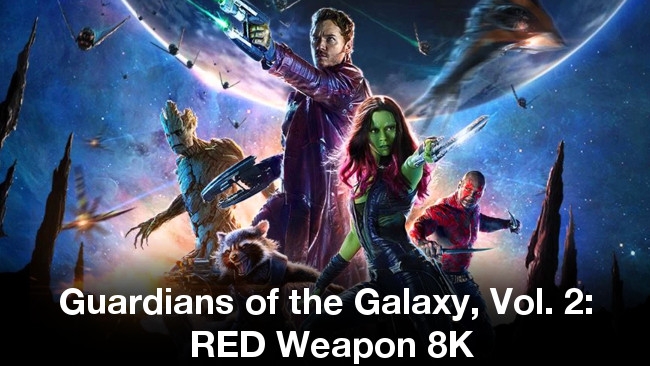 Guardian of the Galaxy: Vol. 2 and RED Weapon 8K

RED scores a major coup, as the next installment of the Guardians of the Galaxy franchise will be the first film shot on the RED Weapon with its 8K Dragon sensor.

If January is any indication of RED's prospects for 2016, then it may shape up to be a very good year for the company. RED has landed a very big film for its Hollywood feature debut of the Weapon 8K camera.

Guardians of the Galaxy (GOTG) was the surprise hit of 2014, thrilling critics and audiences alike, while catapulting a little-known comic franchise into pop culture relevance. The sequel, dubbed GOTG: Vol. 2, will be shot on the RED Weapon 8K, effectively replacing the main camera of the first installment, namely the ARRI Alexa XT Plus.

Of course, only time will tell if this switch is an anomaly or if it points to a larger trend towards the Weapon 8K for high-end feature work. But count GOTG Exec Producer Nik Korda as a fan: "We are all hugely excited to be shooting the next Guardians of the Galaxy on the new Weapon 8K. This is my third collaboration with RED, having previously shot with the RED Epic on Prometheus and the Epic Dragon on Tarzan. The large sensor size and super high resolution offered by the new Weapon 8K, combined with its lightweight and compact size open up a whole range of new creative possibilities."

The RED Weapon 8K may even supplant the use of the Phantom Flex, a high-speed camera that was used on the original GOTG, given the Weapon 8K's high frame rate recording (8K at 75 fps, 6K at 100 fps, and 4K at 150 fps with REDCODE RAW), although that's a point of speculation at this point and the newer Phantom Flex4K's ability to shoot at 1000 fps may keep it in the mix.