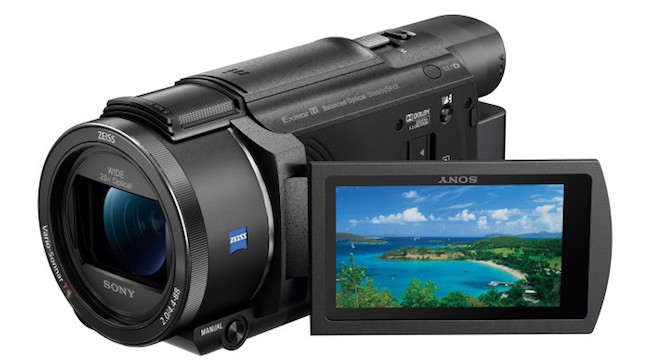 Making our comment about their being no new cameras at CES this year now seem *really* embarrassing, Sony announced a new 4K Handycam, the FDR-AX53.

It is also the first Handycam the company has made with an enhanced version of Sony’s own Balance Optical SteadyShot; a 5-axis image stabilisation system that brings blur-free footage when shooting handheld that also handily can be set to kick in automatically. The company even claims that it will provide clear HD footage when running, which is something we’d quite like to see, especially as it can record up to 100fps in Full HD.

It records at 4K 100Mbps using the XAVC S recording format, and comes with a newly adapted AF algorithm, Fast Intelligent AF (which may be familiar to readers from the company’s α7S II) that optimises communication between the lens and processor to achieve speeds roughly 40% faster than previous models.

A new microphone structure collects sound from five directions, while reducing noise levels by something around 40%. The 5.1ch microphone records high stereo sound in 2ch in XAVC S 4K/HD and high surround sound in 5.1ch in AVCHD, while there is also a ‘My Voice Cancelling’ function that reduces the user’s own voice whilst recording and ensures wedding videos will never be quite the same again.