So, who exactly is going to be shooting in 8K? 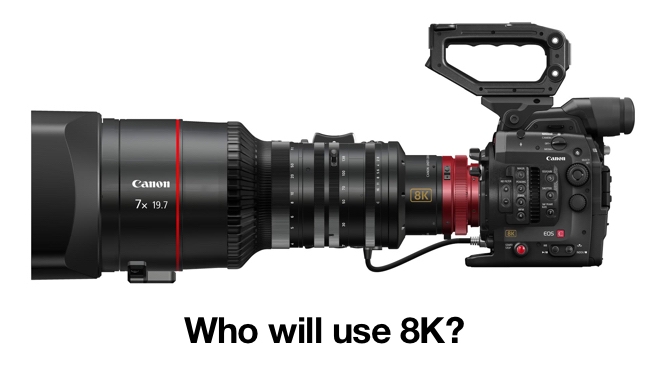 Who will be using 8K is a very good question. We were asking the same thing about 4K about two or three years ago but, already, we're seeing enough trends to figure out who is going to use 4K and where. But 8K?

The trouble with doubling resolution from HD to 4K or 4K to 8K is that you're quadrupling the number of pixels and, hence, any data associated with the full quality picture. This is not trivial, but so far, the inexorable rise of technology, in association with Moore's Law, has dealt with that. It only takes about three or four years of computer progress to be able to deal with four times the data rate as if nothing has happened.

Now, it may be that GPUs will be able to keep the trend going for a few more years, until some fundamentally different type of computing takes over, but, even so, editing and post producing 8K is going to remain resolutely 'high end' for some time.

So, at the point where we're only just seeing the roll-out of 4K outside broadcast trucks and there are virtually no viable 8K screens in the shops (why would there be, with no content available?), then we only have speculation to fall back on if we're going to determine exactly who is going to use 8K.

Look to the east

In Japan, there are no such questions. NHK has been enthusiastically promoting 8K for several years, in an entirely admirable effort to increase the standard of broadcast video almost beyond our wildest dreams. It's three-and-a-half years since the last Olympic Games. One of the most memorable aspects of the London games for me was the recording of certain key events in 8K. Remember that 8K is the equivalent of at least sixty thirty-two megapixel still pictures per second. It's like looking at a moving glossy photograph (or at least it will be, when issues like dynamic range and motion blur are sorted).

NHK is going to broadcast the 2020 Olympics in 8K, but it's still likely that only three people and a dog will be able to watch it because first the broadcaster will have to find the bandwidth to broadcast it, and then, somehow, there will need to be enough 8K screens for it to be viable, or at least, in some sense, worthwhile.

But 2020 is eight years on from 2012. That, as we're becoming accustomed, is probably enough to get the technology sufficiently over the line for it to be viable.

Except, that is, for one thing: motion blur. Because the resolution of 8K is so fine, motion blur as a proportion of the distance between pixels is very much accentuated, and the only cure for motion blur is an increased frame rate. So that means what is already sixteen times the data rate of HD, would be 32 times at 60 fps, and 64 times at a more ideal 120 fps. Using H265 for compression will halve this data rate, but right now it's hard to see the broadcasters wanting to take up around 32 HD satellite or digital terrestrial channels for a single 4K one, especially with such a small audience. If you're taking up 30 channels for one thousandth of the audience, that's costing you 30,000 times the money to reach an 8K viewer (I'm guessing the channels won't be able to sell 8K advertising for 30,000 times the price!).

Despite this, and because the video production is a very different discussion to video distribution (i.e. broadcasting), I think next year will be the year of early 8K cameras. These already exist, of course, with the RED Weapon and the long-standing Sony F65, but there will be more. The Canon 8K cinema camera currently under development is a major flag that 8K will become the norm for video acquisition. Or should I say "a norm," because there are still plenty of very valid cameras that only capture in HD. Practically forever, 4K will be as good as is needed. And yet, 8K will allow more camera positioning in post production and greater resolution for compositing green screen shots. As long as 8K can capture more meaningful data than 4K, then there is an argument for using it.

But I believe we will move beyond pixels before 8K becomes mainstream for video distribution. I will write about this in details in an upcoming article.