Phil Rhodes takes a detailed look at the JVC GY-LS300: a big-chip handycam with some killer features and compatibility with more or less any lens ever made.

JVC's new 4K camera, 4K 2160p if you want to be really exact about it, is something that we've been trying to get hold of for a while. It's the company's first major effort since its acquisition of sensor manufacturer AltaSens. And, if sensors are the key technological leveller in modern cameras, we might expect great things from the newly combined organisation.

The GY-LS300 is a diminutive camera, laid out in the most conventional of camcorder styles. This has downsides with regard to endurance operating, but also upsides, particularly in situations where there's a need to be unobtrusive or highly mobile. Layout is conventional, with a flip-out TFT on the left and a loupe viewfinder at the back. One useful detail that hasn't been widely discussed is that the handle on top, which incorporates the audio inputs and controls, is removable, which makes the camera smaller, lighter and even more inconspicuous. 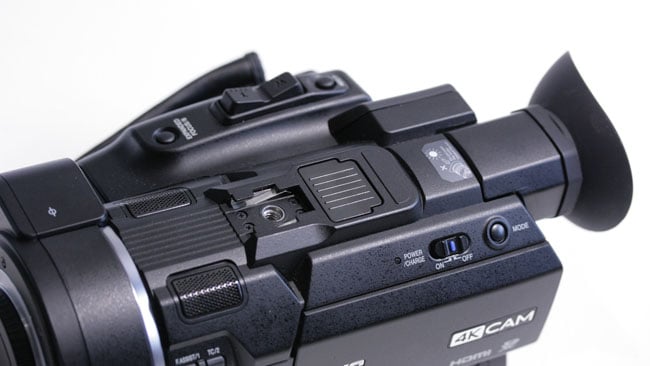 The top handle, with audio inputs and outputs, is removable

Without the handle, the LS300 looks like a chunky palmcorder. Most importantly, though, there are sensor options, about which more below, which make it simultaneously a contender in both highly mobile documentary and current affairs production, as well as more traditional big-chip cinematography. 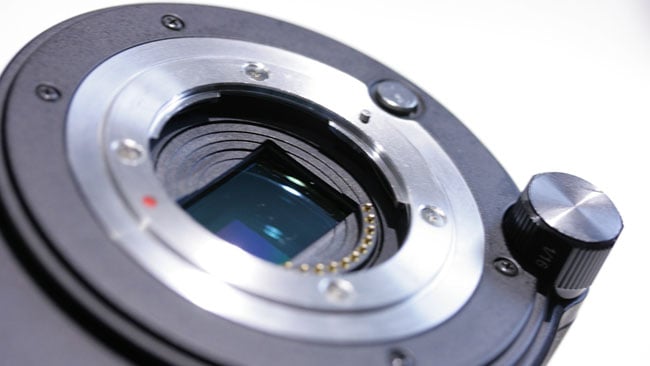 The base technical specification is a list of sensible decisions. That it's a full-sized super-35mm sensor is fairly well known (though precise dimensions are hard to find), and the intention here seems not to be to create a cinema camera, but rather to use the large sensor with excess resolution to create flexibility. JVC has made the eminently sensible choice to put that sensor behind a micro four-thirds lens mount which can be adapted to suit more or less any type of lens.

The mount is active and compatible lenses can be electronically controlled. There is a rotating filter wheel (missing unfortunately, you might recall, on Blackmagic's Ursa Mini) with quarter, sixteenth and sixty-fourth ND filters. It records AVCHD footage, which can be readily decoded by more or less anything. The recording medium is SDXC cards, which are available everywhere and represent about the most cost-effective way to buy flash storage capacity, and there are two recording slots for redundant backup, extended endurance, and other modes.

There are real physical switches for gain and white balance, a proper BNC video output, and the batteries are made by IDX. Although the DC power input is a domestic coaxial type, it accepts 12V power, even though the batteries are 7.2V. These are all excellent choices which do not attempt any sort of vendor lock-in and do not seek to create a range of products from a single design by conspicuously omitting basic features. 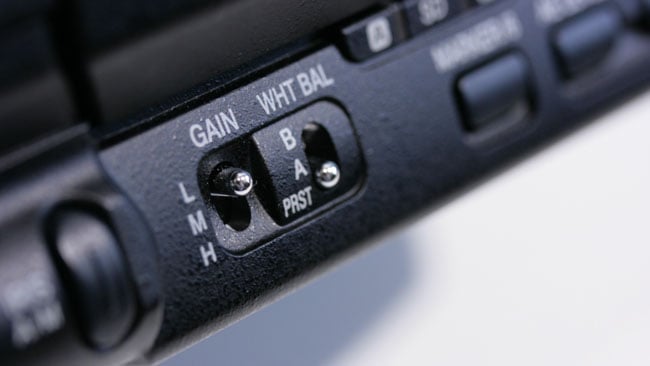 Viewfinding is not such a strong point. At around £3000 body-only, the camera is priced low in the market but not absolutely at the bottom, so it's unfortunate that the pop-out TFT suffers a degree of backlight bleed at the edges and isn't particularly bright. The documents state 920,000 pixels, which implies 1280x720 resolution. The loupe viewfinder is a little sharper, but dimmer, and with only a modest apparent image size. It's also a sequential colour type, producing rainbow effects during rapid eye movement.

None of these problems are extreme and none are completely unreasonable in a big-chip 4K camera at this price point, but it has to be said that viewfinding will never be a strong point of the LS300. An Atomos recorder, which now has support for the low-contrast J-Log recording mode, outclasses the inbuilt monitoring (and recording) facilities hugely, but naturally impacts portability. 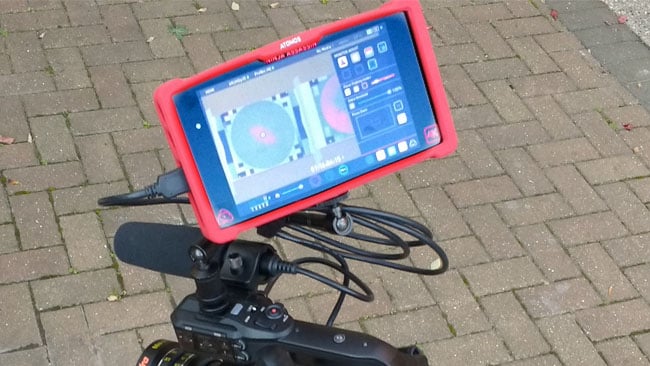 Speaking of Atomos, external recording is likely to be a subject of great relevance to people interested in the LS300 for its big sensor; it has HDMI and SDI outputs, both of which are optionally clean. 150 megabits per second at 4K works out to the same bitrate per pixel as HD would have at just under 40 megabits, which is perhaps not a recording suitable for cinema release but fine for news and documentary. An external recorder is well worth considering in more traditional, single-camera dramatic circumstances, although regrettably there is no way of getting 10-bit pictures out of the LS300. The recordings are 8-bit, which is reasonable on SD cards, but the lack of 10-bit on the SDI output is a shame. The SDI is 3Gbps, so beyond-HD output is, necessarily, HDMI-only. 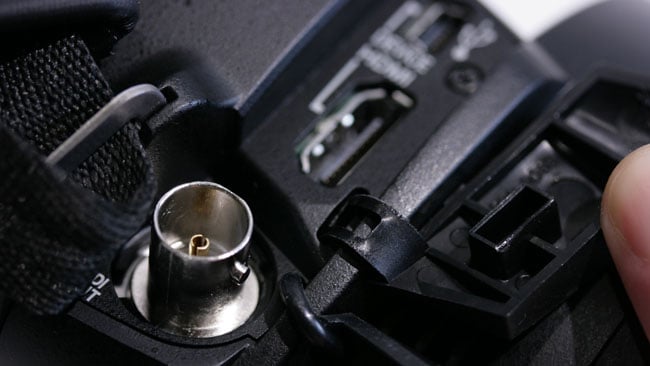 Although there is SDI output, it's 8 bit HD only

Variable scan mapping: the star of the show

Now for the star of the show. If there's a killer feature on the LS300, it's the system that JVC calls Variable Scan Mapping. Since almost any lens can be adapted to micro four-thirds, and coverage varies hugely between ranges and types of lens, the ability to vary the active image is a huge flexibility gain. The active sensor area is variable in increments of a few percent, all the way down to 80%, which the camera calls “MFT” at full res. When recording HD, the minimum active area is 43%, as presumably determined by the amount of excess resolution the sensor has. It is presumably more than 4000 pixels across, natively, and there's promise for the future in terms of what else could be done with the sensor on this or other cameras, in terms of a raw mode. 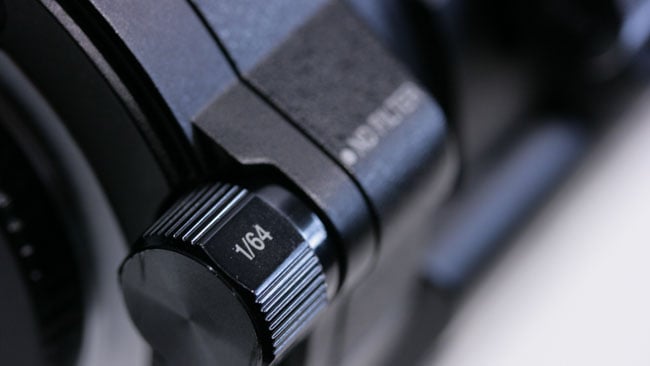 ND filtration is particularly important for documentary and other unscripted work

Some way above the minimal HD sensor area, at 52%, lies a size the camera calls Super 16, which is slightly counterintuitive because the super-16mm frame (12.52 by 7.41mm) is not 52% of the dimensions of a super-35mm frame (24.89 by 18.66mm). Nonetheless, whatever 52% means in this context, the option to use lenses of smaller coverage, such as super-16 zooms which may have been searching for a home since the end of widespread 16mm shooting, is a massive plus point in terms of flexibility and value. Calling a mode “HD” tantalisingly suggests that 2/3” broadcast zooms might cover, albeit via a correcting optical adaptor. Either way, VSM is a superb and unique feature, and one that all cameras should have. Depending on the available equipment, it could massively reduce the total cost of ownership of the camera. Sensor windowing has been offered before, on several F-series Sony cameras and now on the Blackmagic Ursa Mini, but neither offer the flexibility of JVC's implementation. 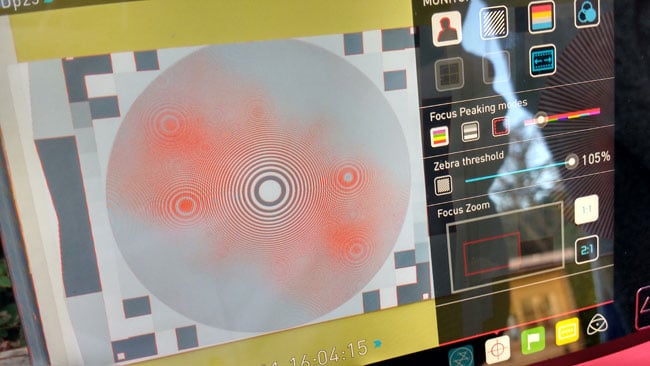 Variable scan mapping does affect aliasing, although test charts are required to reveal it

The only downside is that the feature inevitably requires electronic scaling of the image. Scaling is not easy to do quickly without introducing aliasing. A zone plate is an acid test for any camera, and does reveal a fairly subtle change in aliasing as VSM modes are selected. Happily, this is mainly visible as patterning in the focus assist on the Atomos recorder in these stills, and is not severe enough to limit usefulness of the VSM mode.

The pictures, then. The fruits of JVC's acquisition of AltaSens are visible here, with low noise and highlight handling that is better that comparably-priced competition, particularly with the new log mode in use. JVC claim twelve stops of dynamic range, which is similar to the information Blackmagic issue on the 4K sensor used in their production camera and the first Ursa minis. The JVC, however, is clearly a later and somewhat improved generation, with lower noise and higher sensitivity, although they maintain that it is not intended to be a cinema camera. To the eye, the JVC is perhaps a stop quieter, or a stop faster, or a stop higher in dynamic range (depending on your proclivities) than the Blackmagic, which a welcome development in sensor technology. 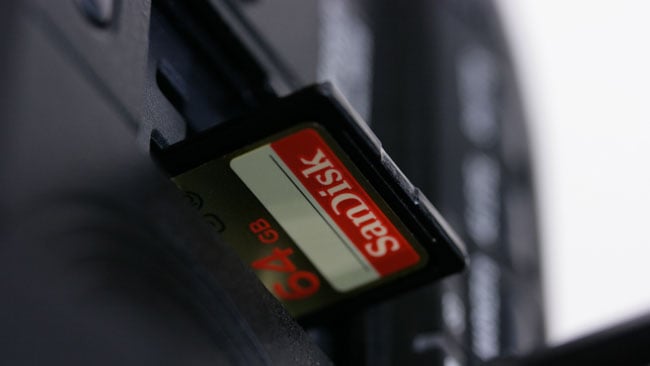 Often, log encoding can make noise visible in the unprocessed image, but the LS300 is sufficiently quiet that this isn't too much of a problem. A full evaluation of log shooting with the camera will, sadly, have to wait until JVC releases LUTs to support their encoding, which aren't quite available yet. The standard Rec. 709 setup is, as in most cameras, a little harsh, and reminds us that it would be a good idea for more manufacturers to follow Sony's lead, as established on at least the FS7, and to include a 709-compatible look with softer highlights. Nonetheless, a bit of fiddling in the process menu (which is largely disabled in log mode) yeilds attractive pictures. The video accompanying this article was shot in J-Log1 and normalised by eye.

Conclusions are complicated. The uninspiring viewfinding and lack of 10-bit output conspire to make the camera feel slightly expensive. Still, although the fact that it's a 4K device is no longer all that unusual, it's one of the better low-cost 4K sensors yet released, and the windowing options are unsurpassed. Depending on the application, storage pricing can be important, and the LS300 uses storage which is comfortably under a fifth the price of some brand-specific card formats. This could easily make up for any perceived offset in value, especially with a buy of more than two or three cards.
The compatibility with more or less any lens ever made, in terms of both mount adaptability and coverage, might also mean a really big saving on glass. The variable sensor size itself might make for an even bigger saving on owning two cameras for different applications.

The LS300 will, I suspect, find many friends among owner-operators with a client base covering both drama and documentary, as well as educational institutions who need to teach a wide range of disciplines. Any person or organisation with a cupboard full of old, dubiously-useful glass should be paying close attention – and that's a lot of people.

A big-chip handycam with some killer features is an interesting, not to say hitherto unknown value proposition. More than any other camera, the value of the LS300 depends on exactly what you want to do with it, but that's sort of the point: give or take a bit of rigging up, it's capable of doing more or less anything.