A revolution in cheap cine lenses? We review the Veydra MFT Primes 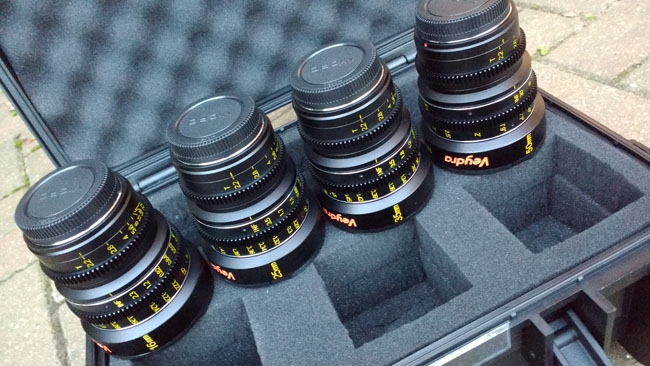 Now that the set is almost complete, we take a closer look at the expanding line-up of Veydra mini-prime cinema lenses and find a lot to like for around $1000 a piece.

Until recently, the most affordable cinema-style primes have been based on pre-existing stills lenses, which can create problems with matching and physical layout. Not so with Veydra's mini-prime set, which is entirely based on new glass.

The first four lenses in this set, the 16, 25, 35 and 50mm, have been floating around since the end of last year. I resisted writing about them until, ideally, the promised 12mm and 85mm options became available and the set felt complete. The 12mm is now out, although the 85mm isn't expected until the end of Q1 2016. Nonetheless, the long-awaited review unit of JVC's GY-LS300 camera, with its micro four-thirds mount, happened to coincide with a compatible set of at least the first five Veydras and the combination was too tempting to resist. 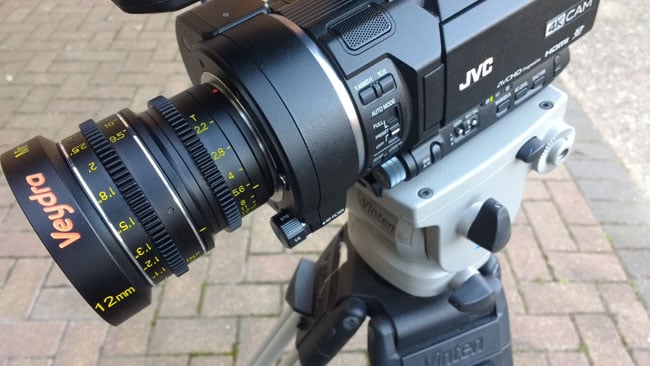 We are perhaps doing the LS300 a bit of a disservice, as it is not being promoted as a cinema camera, but the combination nonetheless works nicely. We'll talk about the it separately, but it's immediately clear that in terms of both price, size and performance – since Veydra claim resolution sufficient for 4K work – the lenses and the camera are made for one another. They will doubtless also see service on various Blackmagic cameras and there's a Sony E option, too, which makes sense given the similar dimensions of the mount. These lenses will, therefore, also be of interest to FS7 users, with which would also be a very reasonable pairing. Through-the-lens images accompanying this article were photographed with JVC's camera.

People used to the inconveniences of stills lenses on motion picture shoots are easily pleased by anything even vaguely approaching a real cinema lens, but the Veydra set has no need for excuses in this regard. There isn't anything competing directly at the same price point, but the nearest cheaper options are much less lovely, for a number of reasons. Veydra has engineered all-metal shells for the lenses. Dimensions are consistent across the range, with equally consistent placing of the focus and iris gearing. Clear, yellow-filled engraving is used for both focus and iris and is available in both metric and imperial measurements. The focus and iris motion is smooth and positive with reasonable drag and clear end points. Focus witness marks – that is, a precision line indicating exactly where a focus distance lies on the rotating barrel – are absent, however. From a manufacturing standpoint, this feature requires time-consuming individual characterisation of each lens and we would not expect to see it at this price point. 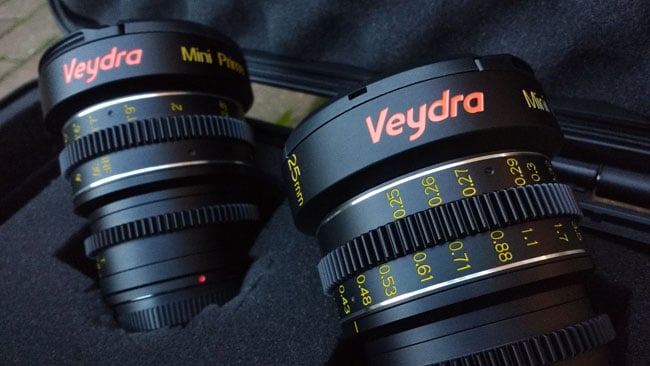 The mini-primes are available with either metric or imperial distance markings.

The only snag on the set we saw was that the 12mm had a small amount of slop between the frontmost and rearmost static parts of the barrel when twisted firmly, as happens when attaching or detaching a lens from the camera. This has been reported very occasionally on other focal lengths too and should not be considered normal. Presumably, a lens with any such fault would be replaceable. Otherwise, fit and finish is truly excellent, representing a real breath of fresh air to crews on smaller productions and superb value for money. These lenses are much less than twice the price of the Samyang-branded cinema primes and, absent rare glitches, have more than twice the build quality. 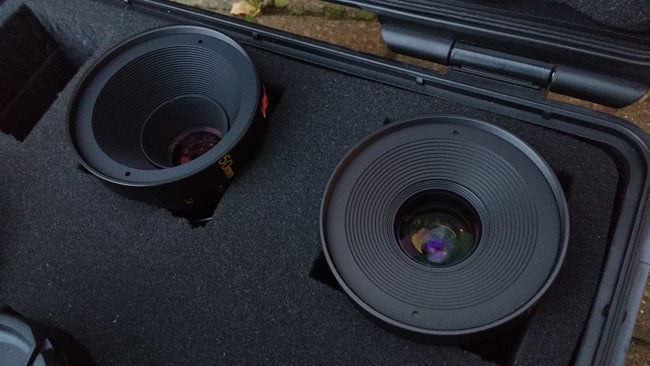 Optically, the good news continues. While there are faster primes out there – just such as the Samyang/Rokinon set at T1.5 – the T2.2 minimum stop of Veydra's lenses is probably just as representative of a cautious approach to corner sharpness and contrast as it is of absolute mechanical clearances. Simply put, moving the iris stop around another few degrees might have enabled Veydra to engrave a 1.5 or a 1.9 on the iris ring, but whether anyone would have wanted to use it is another matter.

The sharpness tests given here are coarse, but represent the results of shooting a simple printed high-contrast target in the corner of the frame. Because these tests were shot in JVC's J-Log and because Rec. 709 recovery cubes are not currently available for the format, contrast recovery on these images was a best-guess, by-eye approach (though consistent across all the frames shown, of course). These images should be compared with those from other tests with this in mind. In each case, the lens is at an indicated T2.2, more-or-less the widest aperture on each. The images are 100% crop PNGs recorded in JVC's 150-megabit 4K mode and 100% VSM, the variable sensor size format that the camera calls "Super-35," although JVC couldn't give us accurate real world size numbers. 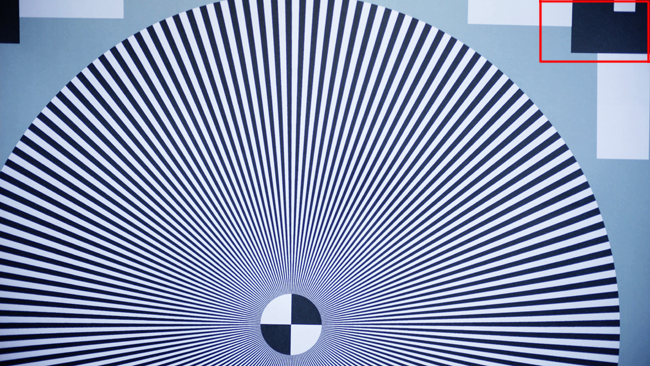 Contrast and resolution chart showing typical extracted area for 100pc crops. The aliasing in the star is an artefact of the downscale to suit the website, not a camera problem. 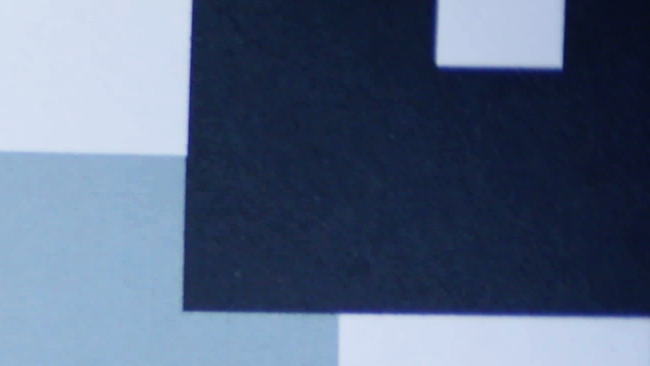 A decision on what's acceptable is, of course, a matter for the individual, but there is little avoiding the fact that these lenses perform very respectably and with surprisingly good matching. It wasn't that long ago that T2.2 felt fast and, for their diminutive size and weight, the Veydras do very well indeed. What's more, though this isn't demonstrated here, there's very little breathing. This is to some extent a consequence of telecentrism, wherein light rays exiting the back of the lens are broadly parallel and fall on the sensor at ninety degrees to its surface. This is, in any case, necessary for many modern sensors, whose photosites effectively sit at the bottom of a hollow and may suffer vignetting if the outer edges of the image don't land going straight down. But in terms of focus, because the image isn't forming (much of) a cone, moving it back and forth doesn't (much) change its size.

As we would expect, the only lens which doesn't perform quite as well as the others (at least wide open) is the 12mm. The curved field of focus becomes somewhat apparent, especially at minimum distances, and the corner falloff is a bit grubby. Given the very short focal length and okay (though not perfect) rectilinearity, which minimises the curvature of horizontal and vertical lines near the edges of wide frames, these compromises to performance are reasonable. Also, the 12mm does not quite cover the GY-LS300's sensor at 100% VSM, although we don't have any information about the absolute size of that sensor.  Veydra do not claim APS-C coverage for the 16mm and 12mm lenses and anyone interested in the wide-angle options would do well to test with his or her camera of choice, especially since many camera manufacturers refer to sensors as "super-35," which may have somewhat different actual sizes. 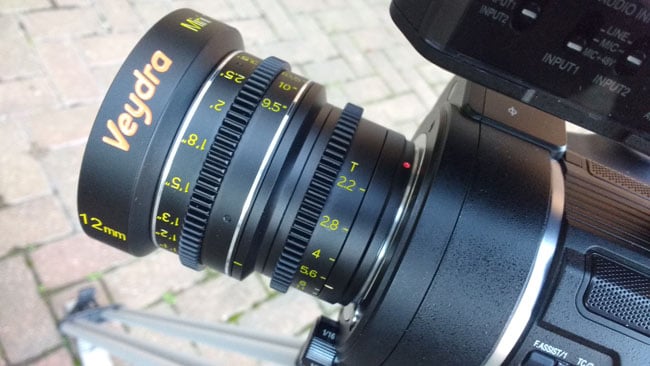 The appearance of flare and veiling is one way to characterise the colour performance of a lens. If the Veydra set has a characteristic in this regard, it's a sort of pinkish-purple, with pretty decent matching between focal lengths. The images given were deliberately set up to show both flare and veiling; a powerful LED flashlight was directed into the lens at a range of five or six feet, which would veil practically anything; the veiling, happily, is principally neutral in colour.

Under less extreme circumstances, the Veydra primes produce attractive rings and sunspots and I can see these lenses being actively preferred on certain types of music video because of their flare characteristics, especially the 12mm. The 35mm produces attractive rainbow-hued edge hits quite easily. 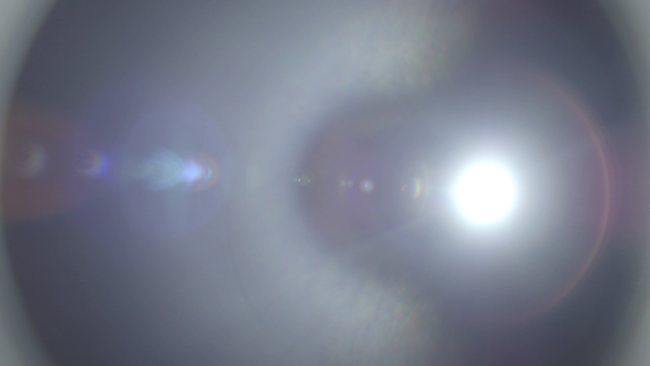 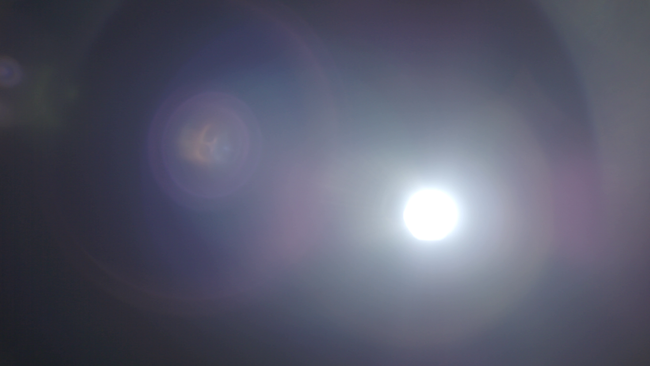 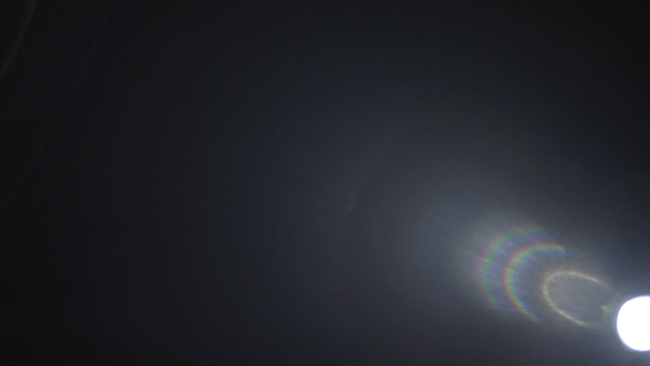 Perhaps the greatest shame is that there can probably never be an EF or Nikon mount option for these lenses, at least without making certain dangerous assumptions about what's inside the EF mount in question. We will soon be looking at Rokinon's Xeen lenses, which do have focus witness marks and are available in EF, but which are many times more expensive. Also, Veydra's set will not be complete until an 85mm and, perhaps, a 100mm or longer lens is available. Though it hasn't been discussed, a zoom, with suitability for run-and-gun documentary work, would be a pretty good idea too, though that's clearly a much larger design and manufacturing challenge.

Ultimately, whether there's some key factor in optical engineering that makes the shallower mounts easier to design for, I don't know. Still, if the question is whether Veydra's lenses are worth the extra money over the next option down, the answer is that they very much are. 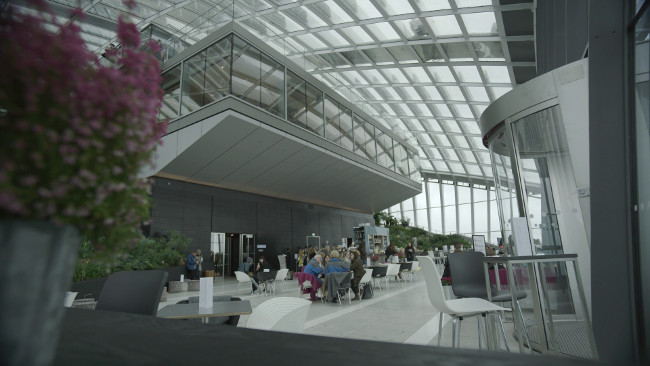 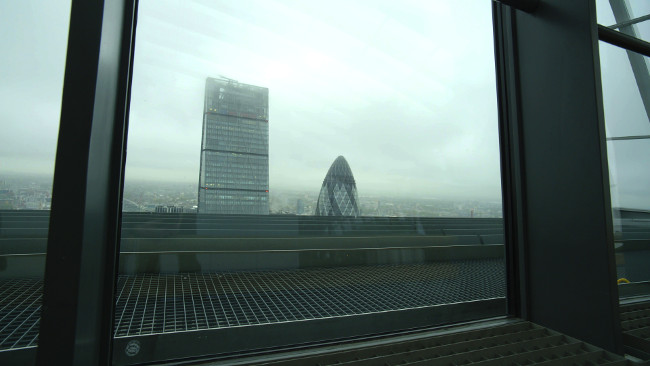 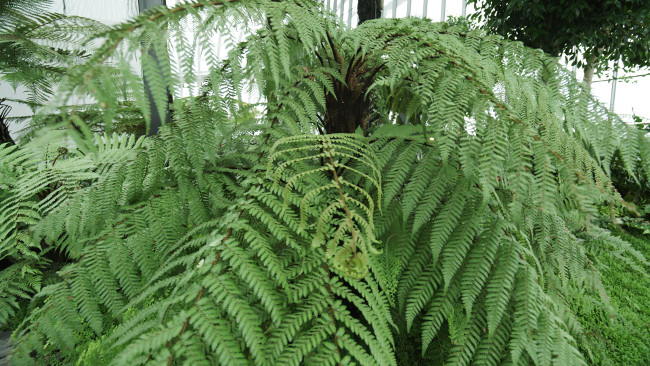 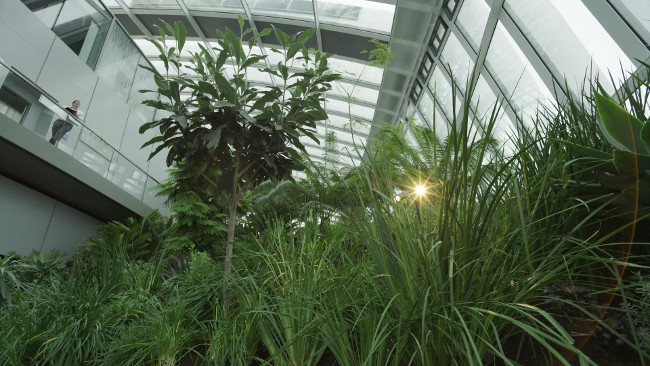 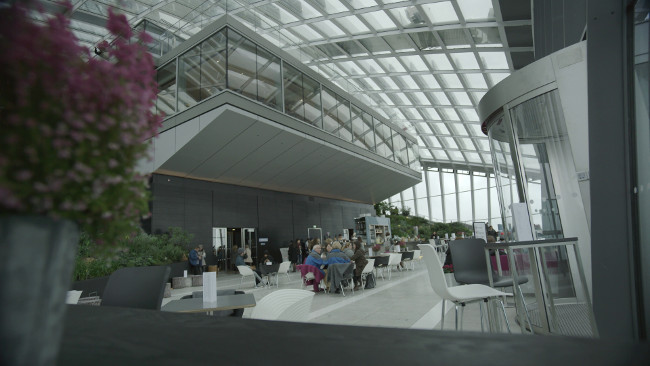 Veydra 12mm with distortion in corners 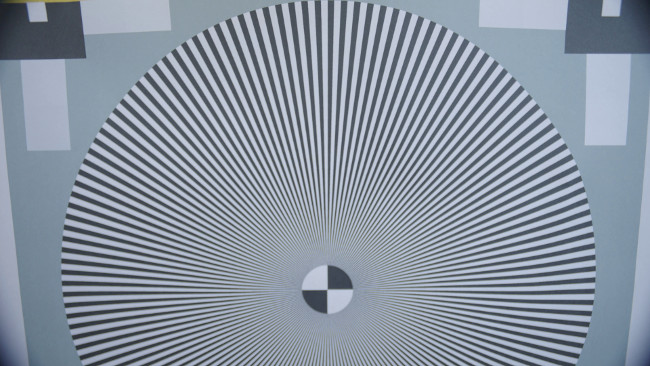 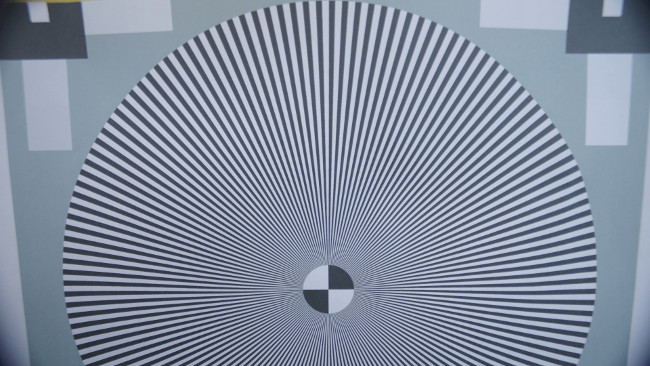 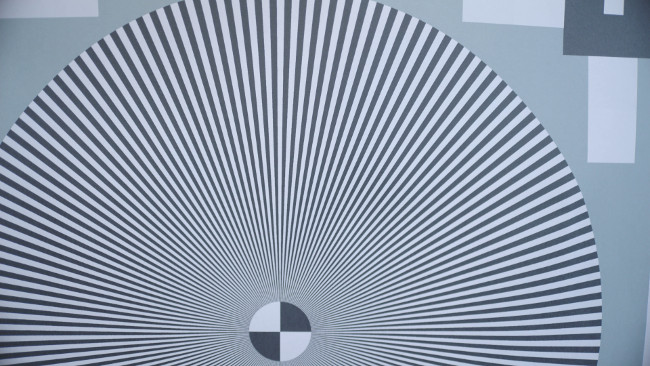 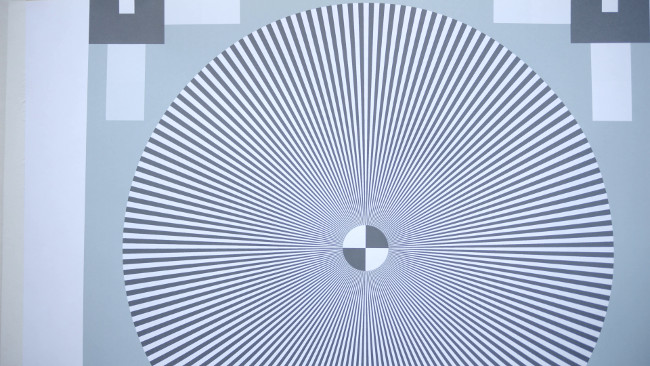 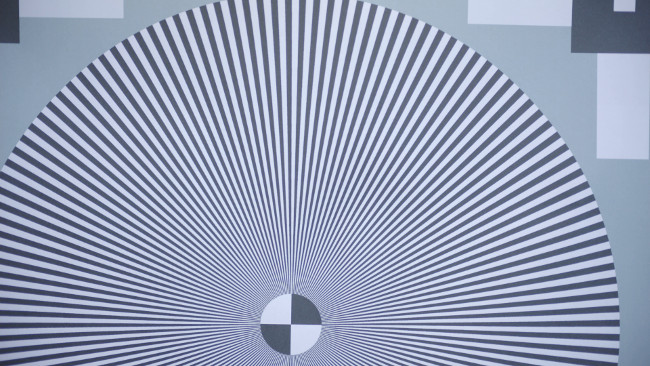 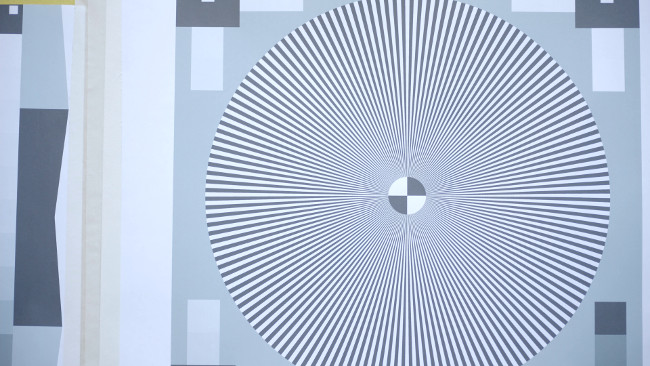