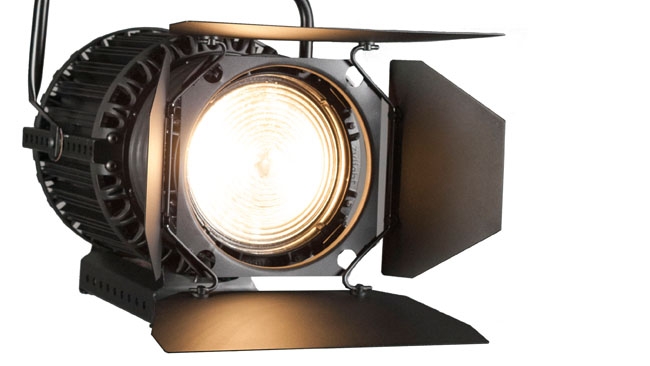 The F8-300 is the newest addition to Zylight's LED fresnel lineup and the biggest selling point may have more to do with sound than light.

Cooling is one of the principal design challenges of modern LED lighting. Colour is probably the other, but Zylight has been using quantum dot LEDs for some time and is, therefore, using the best available technology when it comes to colour output. Quantum dots provide, in essence, a tunable fluorescent material which can be made to glow in practically any desired colour when it's illuminated by the blue or ultraviolet LEDs which drive most current white-light emitting devices. This makes it easier to create a white light with a decent spectrum, as opposed to searching for materials which just happen to glow in the right shades of red, green and blue. Still, though, it has to be kept cool. Overheated LEDs are less efficient, suffer colour problems and may fail more quickly – perhaps very quickly.

This goes some way to explaining how clever designers must be to make LED lighting work, particularly high-power LED lighting. In its original F8 flat fresnel design, which consumes 100 watts, Zylight did well to avoid forced-air cooling and the attendant noise issue. The 200-watt version does require a fan, although efforts have been made to keep noise down to a workable level. Ideally, though, these things would be fan-less. Many people are, quite correctly, very cautious about even the quietest fan, because bearings wear out and the sound department is easy to irritate. With this in mind, therefore, Zylight has launched (though not yet supplied to us for review) the silent F8-300 LED fresnel.

Unlike its famous flat, square LED lights, the F8-300 is a more traditional can fresnel shape, surrounded by large fins presumably intended to radiate heat. Many companies, Mole included, have produced things like this with an eye to the lucrative, large volume studio installation market, where news broadcasters can save a lot of money on both power and air conditioning with LED lighting, as well as enjoying dimming without colour shift.

Zylight has never tried to be at the bottom of the price range and, as with practically every LED manufacturer, its output comparisons are best verified in person, with a light meter and a competing tungsten light. While the pre-existing F8s are attractive from a space-saving and transportation point of view, the promise of unadulterated, no-excuses silent operation with the new device – as well as its increased 300-watt output – is alluring.