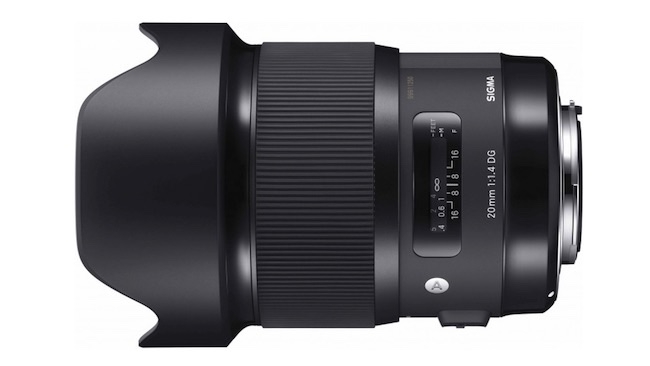 There is an expectation, more than ever before, that lenses will be fast – down towards f/2, where possible, and even lower has been normal for some time on ENG glass. This is difficult on long lenses because the f-number is equal to the focal length divided by the diameter of the (effective) aperture, so on a 600mm lens, f/2 would require a 300mm diameter aperture. Other optical trickery can affect this direct relationship, but this is why long lenses are often very big and still not particularly fast. Canon's 600mm L-series IS lens, for instance, gives up at f/4, and requires a large front light-gathering element to increase its effective aperture. The whole lens is 168mm in diameter, accommodating the theoretically required 150mm dimension.

At first it would seem that a 20mm lens has it a little easier, since to achieve f/2, the aperture only needs to be 10mm, and many real-world lenses have actual apertures that big. The problem with this is that a 20mm lens would, ideally, need to be 20mm from the imaging sensor, and that's physically impossible in DSLRs and other cameras with mechanical components inside the lens mount, or in any camera designed to accommodate such lenses.

For instance, the EF lens mount, by design, puts the back of the lens 44mm (give or take any protruding parts, which must be minimal) from the sensor. But lenses shorter than that require special design considerations which involve extra pieces of glass and the opportunity for loss of both image quality and light. While long lenses may intrinsically be slower for a given aperture diameter, wider lenses are a more complicated thing to make. A good example of this is the type of zoom made for ENG work, with often a single-digit minimum focal length and yet still opening up to f/1.3 in many cases.

The tradeoffs are image quality, cost, and the fact that ENG lenses only need to project an image two thirds of an inch or less in diameter. Sigma's newly-announced 20mm f/1.4 DG HSM lens, like its 35mm and 24mm brethren, offers a minimum aperture of f/1.4. This is very fast for a DSLR lens, even given the simpler optical layout of a prime, albeit a short prime. Specifications suggest that the lens has 11 groups of elements, which serves as an indication of the sort of complexity required of short lenses for mirror-box cameras, although we have not at this point seen anything other than a specification – this is not a review, so much as a technological update.

Perhaps the key capability of the lens is its full-frame 35mm coverage, which separates it from other short primes particularly in Canon mount which are often EF-S and suitable for APS-C sized cameras only. Of course, 20mm isn't nearly so wide on an APS sensor, but on a full-sized chip it'll be an ideal tool to make things look big, looming and impressive. If the camera operator has big ears, they're in shot.

If there's a closet-dwelling skeleton here, it's that shooting f/1.4 on a full-frame 35mm sensor, particularly for motion picture use, is going to drive previously sensible people to dribbling maniacally and having conversations with a potted hydrangea. Recent developments in full-time automatic focus pulling may be of use here, although one would still risk the appearance of the subject of the scene, even if held sharp, floating around in a sea of blur. Sometimes, that's great. Sometimes, it isn't. Still, short focal lengths are perhaps even more useful on slightly smaller, arguably saner (for filmmaking) APS or Super35-sized sensors and Sigma's development is a welcome one.

Distributors are accepting orders, but Sigma expects to ship the lenses in Sigma, Canon and Nikon mount around, according to B&H, the middle of November. We'll have a look at one when one arrives.

Read the press release after the break.

RONKONKOMA, NY — October 16, 2015 – Sigma Corporation of America, a leading DSLR lens and camera manufacturer, is setting new benchmarks for wide-angle image quality with the announcement of the newest Global Vision and market’s first full-frame 20mm F1.4 lens, the Sigma 20mm F1.4 DG HSM Art lens. The lens will be on display at PhotoPlus International Conference + Expo in New York City from October 22-24. The lens will become available late November for the street price of $899, and will be available in Sigma, Canon and Nikon mounts.

This revolutionary prime lens is designed to bring out the full potential of ultra-high-megapixel DSLR cameras. With a focal length of 20mm and F1.4 aperture, this lens delivers outstanding large-aperture brightness and bokeh. Through decades of experience in lens design and Sigma Global Vision lens craftsmanship, the 20mm incorporates both “F” Low Dispersion (FLD) glass, and five Special Low Dispersion (SLD) glass in a design of 15 elements in 11 groups. The combination of advanced optics and optimized lens power distribution minimizes spherical aberration, axial chromatic aberration and field curvature, producing outstanding image quality. The wide angle and outstanding image quality make this lens great for seascape, cityscape, and astrophotography, as well as for photos in low light, indoor photography, portraits, and event and wedding photography.

“While many saw the development of a 20mm lens for today’s super-resolution DSLRs as challenging, Sigma approached it head-on utilizing our advanced manufacturing technologies to create the world’s first 20mm F1.4 ultra-wide-angle lens,” said Mark Amir-Hamzeh, president of Sigma Corporation of America. “This new lens is a result of years of experience by the company’s optical engineers in developing state-of-the-art lens designs and proven production knowledge, and high-precision craftsmanship by our factory team in Aizu, Japan.”

From the start of the design process, Sigma took steps to minimize flare and ghosting, and established an optical design that is resistant to strong incidental light sources such as backlight with its Super Multi-Layer Coating. As with all Sigma Global Vision lenses, the 20mm F1.4 lens incorporates the latest Sigma technology, including an optimized autofocus (AF) algorithm for smooth, fast, and accurate focusing. In addition, Thermally Stable Composite (TSC) compound material is used, which has a high affinity to metal parts, consistently performs well at extreme temperatures, and reduces the size and weight of the lens.

• A Hyper Sonic Motor (HSM) that ensures a silent, high-speed AF function. Smoother AF is achieved when the this AF algorithm is optimized
• A nine-blade, rounded diaphragm creates an attractive blur to the out-of-focus areas of the image
• A brass bayonet mount of highly precise and durable construction to enhance mount’s strength and long-term wear resistance
• Specifications: Weight of 33.5 ounces; a diameter and length of 3.6 inches by 5.1 inches; a minimum aperture of F16; and angle of view (35mm) of 94.5°; minimum focusing distance of 10.9 inches; and a maximum magnification ratio of 1:7.1