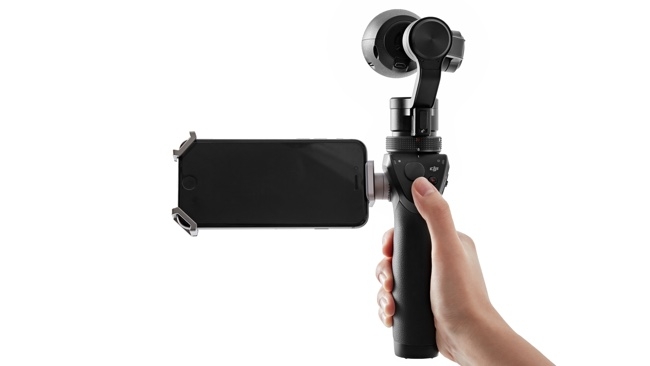 With technology advancing as fast as it currently is, there are always going to be things that feel like cheating. If modern noise reduction software is one, DJI's output of self-stabilising gimbals and mounts is certainly another.

The new Osmo handheld is identifiable as a product of the same design intent as their micro-four-thirds Zenmuse cameras, a flashlight-sized object with a camera module barely larger than a golf ball mounted on the top. The small size and light weight of the camera makes the gimbal itself all that much more effective, and the combined device is as small and handy as any handycam without suffering the terrible problems that are traditional of small, lightweight cameras in terms of unsteadiness.

In this regard it does more or less what other gimbals do, but in a package that's not only small – a lot of people do small – but quick and handy and not demanding of a lot of crew and rigging. It can be pulled out and used immediately, in almost any circumstances, which is a large part of the point of this sort of thing. 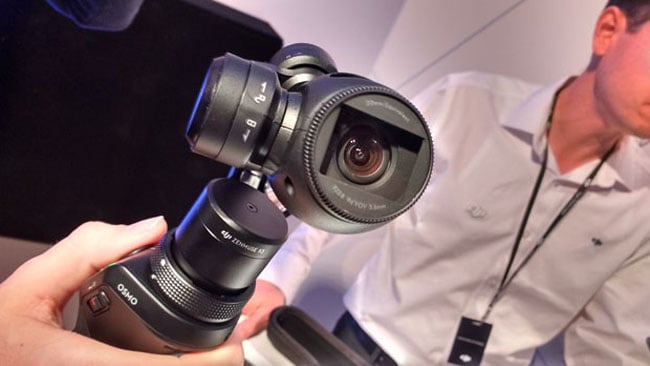 Making the camera a permanent part of the device, we learn, has significant advantages. The thing is minimal enough to consider helmet mounting. This article is based on DJI's London launch event, so impressions are subjective, but for a 1/2.3 inch sensor the pictures are creditable. It's a Sony chip and rolling shutter artefacts are, naturally, somewhat minimised by the stabilisation, but at first impression looks good. Highlight handling, bearing in mind the small sensor and size constraints, is reasonable. The recording media is a micro-SD card which lives inside the camera head, which naturally limits the maximum video bitrate (the spec sheet says 60mbps, without information on whether that varies with frame rate) but keeps things small and light.

The overcranking capability, up to 120 frames at 1080p, is particularly welcome in a camera, or rather an integrated device, which will doubtless appeal to people involved in extreme sports. As with all gimbals, the device really comes into its own with one operator walking the shot with the device in hand, and someone else operating pan and tilt, although the Osmo seems more intended for solo operation. There is a thumbpad for pan and tilt which is appropriately damped and a trigger which reacts to taps in various patterns to enable specific features. Battery life is about sixty minutes (one is supplied, with an external charger; serious users will clearly need several of both).

As with any gimbal, there are things it will not handle. Three-axis gimbals (whether they're part of an aircraft navigation system or a camera platform) can suffer a phenomenon called gimbal lock where two of the axes coincide and the device becomes, momentarily, a two-axis gimbal. The Osmo, like any gimbal, can be forced into this situation if the operator performs particular motions, but, like DJI's other products, resolves things with only a brief disruption to the shot. The software clearly understands the problem and how to solve it. The only other thing to be aware of is that since the Osmo uses a phone – currently required to be an iPhone – as the display and user interface, there is inevitably a degree of delay involved. It looks like six to eight frames, which is usable in many situations without being a characteristic anyone is going to love.

Clearly, this will mount a serious assault on what DJI is carefully calling “action cameras”, especially where DJI's mounts are used for third-party cameras. A gimbal and a GoPro is no longer the obvious choice. From current information – which is, as I say, subjective – it seems well-implemented. The fit and finish is top grade. At £549, the value proposition is likely to greatly excuse any dynamic range concerns that may show up in more rigorous testing. It really is very well-priced. In fact, the Osmo is, at this point, about the same price as the required iPhone, and that's a frankly rather scary realisation.

London, October 8, 2015 – DJI, the world leader in creative imaging technology, today announced the launch of the Osmo, an integrated camera and handheld stabilizer that opens the creative possibilities of cameras in movement.
Using DJI’s signature three-axis gimbal stabilization technology, the Osmo eliminates the shake of traditional handheld devices, creating cinematic shots in an easy-to-use, easy-to-set up form factor.
The modular format of the Osmo makes it fully compatible with DJI’s Zenmuse camera series, but comes standard with a 4K, 12-megapixel camera with a 1/2.3” sensor and a 94° field-of-view lens.
“DJI consistently refines the way cameras move in space – whether they are in the air or on the ground,” said Frank Wang, DJI CEO and Founder. "With the Osmo, we have created a camera specifically designed to capture a smooth moving image regardless of filming conditions.”
Intelligent controls built into the handle make changing between shooting angles, capturing photos or recording video effortless.
Creators can view live images of what the camera captures, adjust camera settings and control smart filming functions including –
Panorama – Take a picture and the camera will automatically pan around 360°, taking and stitching overlapping photos to create a panorama.
Long Exposure – Make handheld long-exposures crisp using the camera’s stabilization technology
Slow Motion – Capture slow motion shots at 120 frames-per-second (fps) up to 1080p
Its onboard universal mount works together with an included smartphone holder in addition to other optional accessories including a tripod, a bike mount or an extension arm.
The Osmo handle comes equipped with an on-board stereo microphone, as well as a 3.5mm audio jack for recording professional-quality external sound.
“Traditional handheld cameras are either shaky, or require bulky stabilizers that are difficult to set up,” said Paul Pan, DJI’s Senior Product Manager. “The Osmo moves the experience of handheld filmmaking from capturing what happened, to sharing expressive, smooth video that shows what an experience was like.”

The Osmo handle, which can be bought separately without a camera, is fully compatible with DJI’s existing Zenmuse series, making it the perfect accessory for everyone who already owns an Inspire 1 with a Zenmuse X3, a Zenmuse X5 Pro or a Zenmuse X5 Raw.

The Osmo is available for pre-order at store.dji.com for USD 649 and GBP 549 and will begin shipping October 15. Additional Osmo accessories include –
Tripod – Place the Osmo securely on almost any surface.
Extension Rod – Reach out further for all new angles. Combine with the Tripod for added height.
Bike Mount – Lock the Osmo to your bike for a new kind of bike movie.
Universal Mount – Add extra microphone or LED light to your Osmo.
Straight Extension Arm – Mount two accessories to your Osmo at the same time.