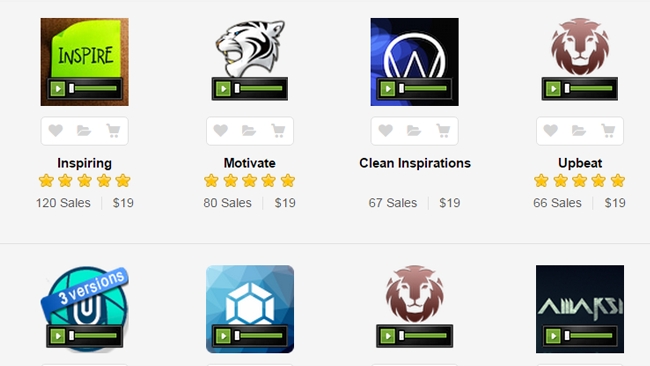 What's playing in the jungle tonight

In much the same way that royalty free businesses have revolutionised the way the industry deals with stock photography, a new site is looking to do the same with audio files.

Yes, yes, I know. Music licensing is a completely miserable experience, but there is light at the end of at least one tunnel.

The name of this light is Audio Jungle. It's one of a collection of sites run by a company called Envato, which deals generally in stock media, including moving pictures, sounds, and things like layout templates for print and websites. What Audio Jungle does differently is require that – in the words of their own frequently asked questions: “Authors cannot register their AudioJungle music tracks with a performing rights organization (PRO). This requirement is so that buyers should not have to pay any further fees to a collecting society/PRO. You will need to check this in your country, as different PROs have different approaches to collecting fees on public performance of music.”

Now, the devil is in the details, and particularly that last sentence (though I’m not sure what, if any, leverage a collecting society would have against a user of a piece of music that wasn't registered with them). But overall, Audio Jungle appear to be doing it right. They ask a fee for a non-exclusive right to use a piece of work, without the labyrinthine complexity of a performing rights organisation and all of its rules. In many cases, the rules are more of a problem than the fees. It can be incredibly difficult even to work out what the fees are for anything other than very mainstream uses, and they vary wildly from entirely affordable to completely impossible for many independent content creators.

Of course, we have to address the underlying issues here: naturally, everyone should get paid a fair rate for their work, but Audio Jungle's approach remains entirely fair in comparison to creative work other than music. Most of the work done by freelance creatives in film and TV works the same way: a rate is negotiated and paid, based on the work the project involves and its intended use. Only musicians, actors and sometimes stills photographers expect repeat fees. In other trades there is no expectation of per-use fees, and it's not reasonable to leap to the conclusion that anybody is being cheated by Audio Jungle's approach. They are not, to be fair, offering the same sort of high-end music, recorded with full-blown symphony orchestras, that people like Audio Network provide. Nevertheless, the quality is reasonable, and ultimately this is truly royalty-free material which is not terrible. That's been unheard of for years.

So, does it solve all the problems? Well, no; many of the tracks on a lot of royalty-free (or nearly royalty-free) sites are registered with things like YouTube's content ID system, or others, and may abruptly vanish if things aren't set up right. Audio Jungle's site mentions that YouTube “claims are usually cleared within 24 - 96 hours”, which sounds reasonable until we consider that the twenty-four to ninety-six hours in question might be the period during which your video is at the top of slashdot or flying around Facebook, at which point all your users will be abruptly told that you are a copyright thief even if you've paid every fee under the sun.

So, the issue is only partially resolved, but Audio Jungle deserve significant praise for their approach. If the music is ten or twenty per cent more expensive because of that, fine. I'll take it, no question. The problem was not often the fee, the problem was the complexity and worry, and they have removed a great proportion of that from the equation.