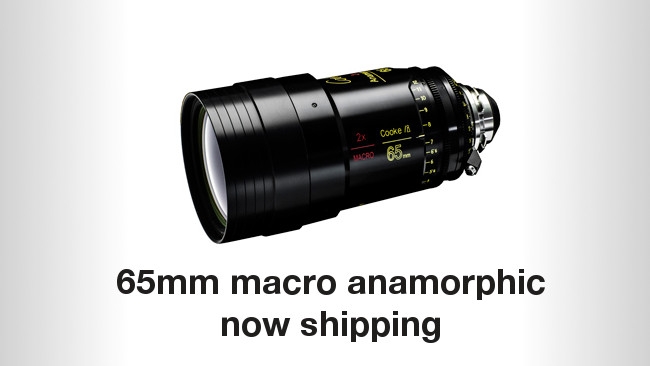 Cooke showed off its 65mm macro anamorphic prime lens at IBC2015, which is now shipping, but the biggest news may surround its to-be-released anamorphic zoom lens.

Cooke Optics, in partnership with Angeniéux, announced back in 2013 that the companies would co-develop a line of anamorphic lenses. We profiled the first Cooke anamorphic primes available back in 2014, as the 32mm, 40mm, 50mm, 75mm and 100mm lenses went to market. Since then, the 65mm surfaced as an exhibitor piece, making the rounds at this year's NAB, CineGear and BIRTV shows, among others, before landing again at IBC2015.

While Cooke may be winding down its exhibition run for the 65MM macro anamorphic, which features 4:1:1 close-up magnification and an impressive close focus distance of 5.5 inches, there are other developments to report that should interest fans of Cooke anamorphic glass. First off, the 65mm and 135mm anamorphic lenses are now shipping, essentially completing the Cooke line of 2x squeeze, T2.3 anamorphic prime lenses.

Cooke is also close to finishing a revamp of its technology metadata system that supplies lens data for VFX and post workflows. The new system, dubbed i3, supports distortion mapping for each lens, as opposed to approximating measurements based on focal length. New lenses that ship in Q4 2015 will come equipped with the updated metadata system. Lenses with older 'i' sensors can get the upgrade to i3 for a "modest cost" to be revealed later.

Now that the primes are out in the wild, Cooke is refocusing on its anamorphic zoom lens efforts. While details have been scant to this point,Cooke has told us that: "the zoom range will be 35-140mm, while the T stop will be circa 3." So, there you have it. Cooke, known for its primes, may have leaned on Angeniéux's brilliance as a zoom lens manufacturer in development of the forthcoming 35-140mm anamorphic. We'll follow-up this story as more details become available.