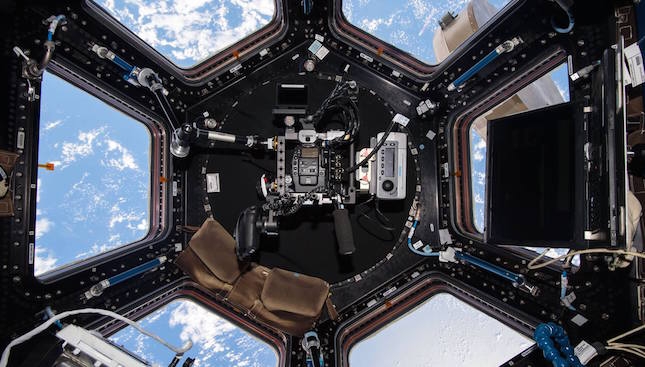 Codex in action on the ISS

Codex’ new Production Suite is a Mac-based dailies and archiving system aimed at all production workflows, while the company is also using IBC to talk about the use of its Action Cam systems in the Headcase VR rig developed by Radiant Images.

Codex Production Suite is available on Mac OS X as well as Codex’s own hardware platforms – the Codex S-Series and XL-Series. It supports both RAW and compressed camera formats and features a decent range of colour management and grading tools, including support for ACES colour pipelines.

According to Codex, non-destructive, CDL-based colour grading tools enable users to create or modify looks and communicate them through to editorial and the final colour grade. CDLs and LUTs can be imported and processed so that externally-created “looks” can be applied, either overall or on a shot-by-shot basis. These looks can then be baked into editorial dailies or appended in the metadata information for other deliverables.

Happily, it all integrates with the Codex Capture Drive Dock / 2.0 for decently fast copying of original camera negative to a hard drive; a CFast 2.0 reader allowing users to ingest files from ARRI AMIRA or MINI (ProRes) or Canon EOS C300 Mark II (XF-AVC)

It transcodes to all the common dailies formats you would expect, including Apple ProRes, Avid DNxHD and H.264, and also handily features high-quality debayering to DPX and Open EXR for VFX deliverables.

The Headcase camera, meanwhile, is the one used by Guillermo Del Toro to shoot The Strain - a live-action VR project produced by Mirada for FX Network, which premiered at Comic Con 2015. It uses 17 Codex Action Cams (Full HD at up to 60fps) mounted in a spherical array. All the Action Cams are sync’d together and have common timecode and metadata, all of which apparently makes the stitching of images in post somewhat simpler than with other systems.

Currently it’s a hire rather than buy proposition, but presumably that will change if there’s a significant uptick in demand.

Lastly, the company is also boasting — quite rightly — about the various high-profile projects it’s been working on. But our favourite has to be the fact that Codex kit has been circling the Earth for the past year, having travelled to the International Space Station last September to support the Canon C500 cameras being used on the forthcoming Disney/IMAX production A Beautiful Planet, due for release next April.

More on that as the project nears completion…