A Bond film on zero budget 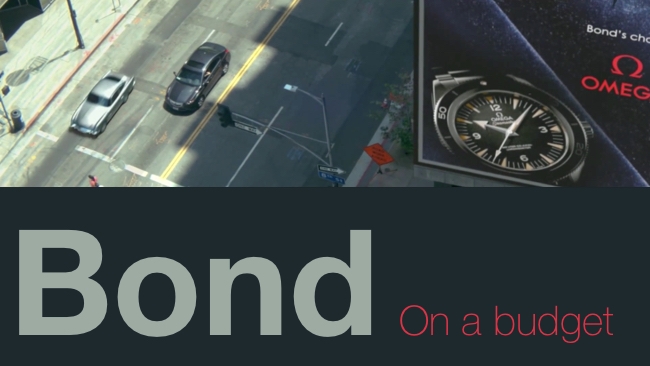 This is a clever example of how you can get very close to the original look of sixties and seventies films, using commonly available software (and a lot of skill...)

The look and feel of sixties and seventies films is so definable that today, now that we have all the tools, it's possible to recreate the distinctive look on a budget of, well, nothing, actually, if you exclude the cost of the tools that you probably have anyway.

It's fun to deconstruct and re-assemble all the elements of a well known film character like Bond. Obviously you're not going to get the original actors, (they'd look different now) but what Phil Grishayev has cleverly done here is take the famous Bond Aston Martin and create a sequence around it.

This homage to the early Bond films is notable not only for the accuracy of the imagery (the Bond car itself, the graffiti, the Bond logo on the buildings, the watch adverts) but for the physics of the car itself. While not quite perfect, it's close enough to make you think that you're looking at a fifty year old Aston Martin as it drives around the streets.

We like the way this is graded (see the "making of" film after the main piece), and the super-wide aspect ratio.

The film was shot with a Proskar 16 anamorphic lens to contribute to that vintage look.