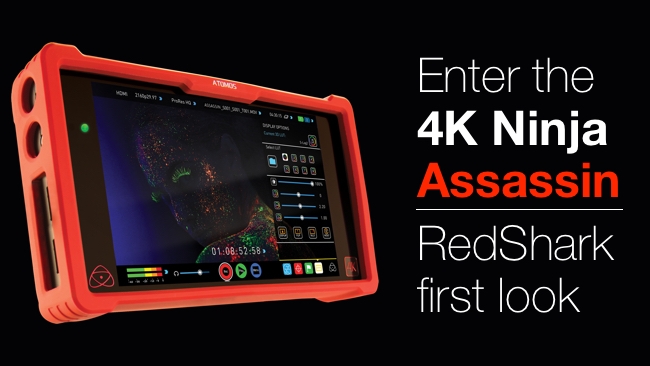 The Ninja Assassin is Atomos' long-awaited 4K version of the Ninja recorder and monitor. We've had a look at one.

The proposition made by Atomos with their recent Ninja Assassin announcement is straightforward: if you like the idea of the Shogun (and it's a very likeable idea) but don't feel like paying for features aimed squarely at the high-end, the new device is interesting.

It'd be interesting anyway, given the way that the Shogun itself has been snapping at the heels of the competition. The key feature was always the display; both the Shogun and its new sibling are competitive as monitors, let alone recorders. Sensibly chosen to be 1200 lines high (in the 16:10 aspect ratio developed for things like computers and tablets) it leaves space for some status information in addition to the full-resolution HD picture itself. The more recent addition of user-selectable LUTs to the Shogun – which can be viewed on the display, output to other displays, or burned into the recorded image – is a feature bringing the range more closely into competition with the highest end of onboard monitoring and something that was really somewhat overdue; the feature is retained on the Assassin. It is, very visibly, the same device, shorn of the twelve-gigabit SDI handling, raw recording and balanced audio I/O.

The for some users, the XLR audio omission is perhaps a greater loss than the SDI; there's a train of thought that suggests that SDI cameras are the most likely to offer proper audio connectivity in any case, whereas it's far less common on devices having only HDMI output, which tend to be a little more consumer-oriented. People looking for a way to record highest quality audio alongside a video-capable stills camera such as the Sony A7S may still want to choose a Shogun. The Lemo connectors and precision audio amplifiers are probably not one of the cheaper parts of a Shogun to manufacture, though, and the specifics of this decision come down very much to the user's individual use case. The eight channels of HDMI embedded audio remain supported, along with a 3.5mm stereo jack with either mic or line level audio which is probably still better than that provided on most DSLRs. One of Atomos's nicest features is the option to delay the audio a number of frames, allowing careful users to match the often delayed HDMI outputs on lower-cost cameras.

Leaving out SDI is probably a more straightforward decision. Implementing SDI, especially at the very high bitrates required for quad HD and 4K working, is not a cheap thing to do; the devices that do it are subject to the usual semiconductor manufacturing considerations of yield, meaning that users are paying for all of the dead microchips that don't quite make it through the factory process properly. Twelve gigabits per second is fast – very fast, especially down a flexible cable that's designed for field use – and if SDI isn't required, there's no point in paying for it. Presumably, the Assassin will largely follow the Shogun's update schedule; we can assume the hardware platform and thus the software is, in the main, identical. Some of the proposed updates, such as various proprietary raw format to CDNG conversion, do not make sense for an HDMI recorder, but things like the uncompressed V210 (that's uncompressed 10-bit YUV) are perfectly applicable.

Also, they've come up with a nice little silicone rubber casing for it, which not only protects the edge of the display glass (without obscuring any of it) but also provides a stand to allow it to be propped up on a desktop. I'm not sure about the red, but there's quite a nice side effect – when the device is mounted on something using the upper or lower quarter-inch screw threads, the rubber casing provides a bit of cushioning and makes things easier to tighten down, which is good.

Ultimately, it's a pretty simple situation. If you'd like a really nice field monitor and recorder but don't need XLR audio inputs and SDI, the Ninja Assassin is the tool of choice. It’s very competitive and well priced. If you do need the SDI, well, you'll need to get a Shogun, but the price break is reasonable.