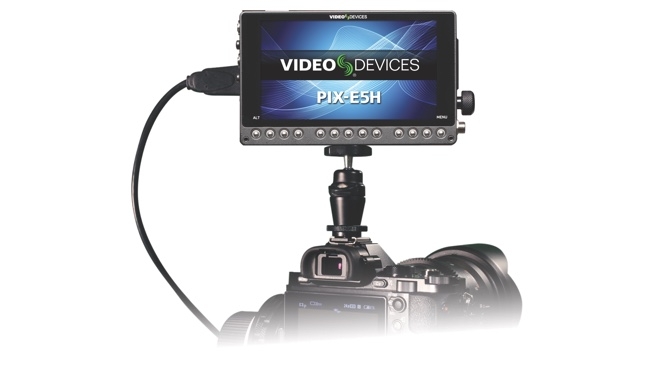 The PIX-E5H 4K - shipping in time for IBC

It’s starting to get busy in the run up to IBC, with Video Devices announcing it is shipping its PIX-E5H 4K recording monitor first announced back at NAB.

The spec of the new unit is broadly similar to that of the just-announced Ninja Assassin — HDMI-only being the main headline — albeit the Video Devices unit is $100 cheaper.

Firmware Version 1.04 for the PIX-E5 and PIX-E5H, meanwhile, adds support for HDMI recording triggers for Sony and Canon cameras. The 500GB Samsung 850 EVO mSATA solid-state drive has also been added to the approved media list for use in the removable USB-based SpeedDrive. HDMI audio inputs and outputs are also ramped up to four and eight channels, respectively.

Some more info culled from the press release below:

Both of the five-inch, 1920- x 1080-resolution, 441-ppi PIX-E5 and PIX-E5H monitors come packed with a full suite of precision monitoring tools and the ability to record 4K edit-ready files to the affordable SpeedDrive. Designed as an HDMI-only video alternative, the PIX-E5H records a range of Apple ProRes codecs from Proxy to ProRes 422 HQ. The PIX-E5, which comes equipped with both SDI and HDMI I/O, has the added ability to record the highest quality Apple® ProRes 4444 XQ.

Included in the impressive suite of monitoring tools is TapZoom™ for unrivaled focusing speed, false colors and zebras to help set exposure, guide markers for framing, and a range of scopes, including waveform, histogram, and vectorscope. PIX-E camera-mount monitors incorporate a “best-of-both-worlds” user interface that combines easy-to-access tactile buttons with an intuitive touch screen. The monitors also feature robust, die-cast metal housings and an LCD display protected by damage resistant Gorilla® Glass 2. These features make the PIX-Es ideal for cinematographers and videographers seeking monitors that can stand up to the rigors of the most extreme and demanding production environments.