Atomos upgrades its Ninja series to 4K with the Ninja Assassin 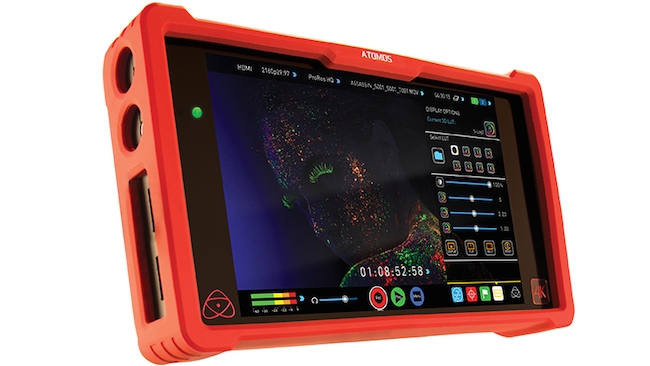 I am the assassin...

Just in time for IBC, Atomos releases the Ninja Assassin. And at 10% lighter and 35% cheaper than the Shogun it draws an impressive line in the sand.

We've known for a while that there was going to be a new Atomos product for IBC. We couldn't mention it because because - well, we didn't know what it was. We do now, but right up to the wire we've been speculating. We've had suggestions ranging from a camera (well - it's not impossible!) to an ironing board with an SDI port. Not all of these speculations were equally sensible.

These wildly inaccurate postulations aside, one thing we did all agree on was that it was time for a 4K upgrade for the venerable, not to say legendary, Ninja range.

The Ninja was Atomos' first recording product. It was strictly HD and strictly HDMI. These two qualities have come to define the Ninja. Ninjas with SDI were called Samurais.

Over the last four years, the Ninja (and closely related Samurai) ranges have evolved very fast, to include better (in fact now rather lovely) screens, and vastly improved software. They are able to record, playback (internally and to external monitors) and they also sport software that allows them to be used as monitors mounted on cameras.

Good though these monitors were, they were arguably too small and too low a resolution for 4K. And of course internally, they didn't have the bandwidth or processing power to handle 4K either.

When the 4K Shogun arrived, it was a glimpse at the future. Lightweight, with a bigger screen, more processing power and full HD resolution (on a 7" screen, this looks fantastic) it was a genuinely new generation of product.

Even though the Shogun had a high specification - with 12G SDI and XLR Audio I/O, it was still firmly in line with the tradition of Atomos' pricing - lower than the competition.

So, what exactly is the new Atomos product? It is a 4K Ninja, and it's called, specifically, the Ninja Assassin.

How is it different from the Shogun?

It's 10% lighter and 35% cheaper. It achieves this saving by dropping the SDI and XLR connections and limiting itself to HDMI. While this may seem to be a drawback, the new device is fully compatible with a raft of today's popular 4K cameras including the Sony A7S, A7R II, Canon XC-10 and Panasonic GH4. With all of these, recording in a "production quality" codec like Apple's ProRes will mean that the main drawback of all small 4K cameras, the necessarily high compression rate, can be bypassed, at the same time as endowing all these cameras with a 7" Full HD monitor screen.

All of the scopes and monitoring tools are carried over from the Shogun.

An additional bonus is that the Ninja Assassin will ship with a bright red Amour Bumper for added ruggedness.

We already have a Ninja Assassin and you'll be able to read our first impressions here very shortly.

Full details and prices in the press release over the page

Ninja Assassin delivers 325ppi monitoring functionality and the 7” size needed to truly master 4K, it’s the only true 10-bit 4:2:2 professional recording solution for Apple, AVID & Adobe workflows and all with a price & weight amongst the lowest on the market – Ninja Assassin is available today from Atomos’ extensive reseller network.

Melbourne, Australia – 1st September 2015: In 2014, Atomos revolutionised the HD to 4K transition with the announcement of Shogun. Now, with their commitment to delivering powerful creativity weapons for professionals, they bring you the Ninja Assassin.

The Ninja Assassin extends the legacy of the Atomos Ninja line up in to the realms of 4K UHD and 1080 60p. Combining professional 4K/HD recording, 7" 1920x1080 monitoring, advanced playback and editing in a compact, lightweight, affordable add-on to existing DSLR, Mirrorless and Video, Cinema cameras.

The Ninja Assassin boasts the screen size, screen resolution, advanced recording capability and scopes of the premium Shogun model, but forgoes the 12G/6G/3G-SDI connectivity, RAW recording functionality, in-built conversion, Genlock and balanced XLR audio connections. The main benefit – a 10% weight reduction to an incredible 430g and an incredible $1295 price point including Soft Case, SSD Caddy and AC Adaptor. This firmly targets 4K DSLM cameras such as the Sony a7s and a7RII, Canon XC-10 and Panasonic GH4 bypassing their known limitations such as compressed MPEG/h.264 recording, 4:2:0 color compression, 30-minute time limits and the disadvantage of monitoring on a small 3” screen.

“The Ninja Assassin eliminates creative barriers and unleashes the true power of the worlds best sensors into the hands of creative pro’s over one single HDMI cable. We are truly proud to deliver professional monitoring, video production tools and recording capabilities to assassinate camera limitations,” said Jeromy Young, CEO and co-founder of Atomos. “Seeing an image on the Assassin’s 7” screen and feeling the low weight is when you truly believe it’s the only choice for 4K high-res production,” added Young.