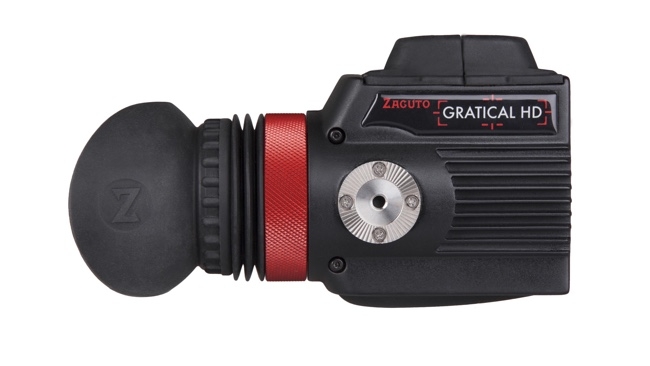 Zacuto's Gratical HD is a phenomenally capable unit that, while limited to HD resolutions, is right at the top of the viewfinder pile.

The performance of sensors has now accelerated so far ahead of almost everything else in camerawork that it's been difficult for quite some time to really see what we're doing. Still, as electronic viewfinders begin to approach the resolution of at least HD cameras, it looks like things are improving.

One such device is Zacuto's Gratical HD, a viewfinder based on OLED display technology which makes a grab for the market that wants not only the excellent contrast and colour performance that's intrinsic to the display technology, but also a comprehensive selection of test and measurement options which are displayed in an area of the OLED, which is 4:3 in aspect ratio, separate from that used to show the actual image.

This review might feel a little late; Zacuto first showed the Gratical at NAB 2014, the best part of a year and a half ago, but it's taken this long to get a review unit. Key facts are that the OLED panel itself is 1280 by 1024 pixels, meaning that the Gratical is a 720p display. Because the OLED device is very small – on the order of half an inch - there is no option to flip open the loupe and view the panel directly, as has been possible with other viewfinders for decades. This is the key drawback of this approach and will worry some people more than others. Yes, one should really have a better, larger monitor when operating from the hip, although sometimes that can't happen and a flip-up eyepiece will be missed.

The rest of the physical layout provokes a few queries at first, but really makes very good sense, with the design biased to make the viewfinder taller than it is wide. This is unconventional but avoids the viewfinder making the entire setup inconveniently wide, as can be the case with some competing products. The top-mounted connectivity also makes sense, allowing bulky SDI or HDMI cables to remain clear of side-mounted controls and the camera operator's focussing grip. There is no separate power connector and powering the Gratical viewfinder externally requires a battery plate adaptor, which is a minor irritation as the device takes Canon LP-E6 batteries, not the far more common Sony camcorder batteries which have become popular for this sort of application and for which accessories are more available.

The loupe is adjustable to accommodate comfortable focussing for most people and crucially provides a view of the OLED that appears reasonably large, but without requiring excessive look-around to view the whole picture. Pictures are bright and sharp, and Zacuto specifies that the maximum luminance is around 250 candela per square metre. This is similar to, or slightly less than, the average TFT and might feel perhaps a bit dim to an operator whose eyes are adjusted to a bright daylit exterior, but it's nothing to write home about. Despite the sub-HD resolution the pixels are only on the very edge of visibility even when viewing the high-contrast menu text (naturally, there's a 1:1 pixel mode, assigned by default to one of the four function keys). The high contrast of an OLED display is well in evidence, and colour is subjectively deep and pleasing.

Electronic processing and analysis features are extremely comprehensive. The scopes (waveform, vector and histogram) are small but conventional, and focus peaking and false-colour exposure modes are much as seen elsewhere. What's particularly impressive is the lookup table capability, with entirely separate LUTs selectable for viewing and conversion to the outputs. While this is veering somewhat outside the remit of a viewfinder, the variable capability of all the world's camera bodies makes the LUT capability extremely welcome and means the Gratical HD is really rather more than just a way to look at pictures.

There are two models of the viewfinder, one of which omits many of the analytical and focussing displays and LUT capability which may be added at an additional cost; the configurability is welcome, although it seems likely that anyone with $1650 to spend on a viewfinder might also be able to scrape together $3100 for the full suite of features.

What this does do is keep the cheaper option somewhat competitive with Blackmagic's upcoming OLED viewfinder. Blackmagic's effort is full-resolution but has effectively no onboard features – it's just a display – whereas the full-bore Gratical, though twice the money or more, is hugely capable, especially in terms of lookup tables and output processing. These products are somewhat complementary and the release of the Blackmagic viewfinder will not diminish Zacuto's work, but the full $3100 version of the Gratical eclipses more or less everything in terms of sheer featureset.

There are two things to be aware of. The first is that the viewfinder is rather slow to start up – many seconds, which is typical of FPGA-based electronics which need to load firmware – which will lead to its being left on. Power consumption is obliquely referred to by the idea that a single LP-E6 battery (7.2V, 1800mAh, thus about twelve watt-hours) will power the device for three hours, suggesting a power consumption of a reasonably frugal four watts. This will vary with the selected features – LUTs are likely to be power-hungry, for instance.

The second problem is that the Gratical viewfinder does not accept signals beyond HD resolution. The HDMI is to version 1.4 and the SDI I/O is 3Gbps, limiting the device to 1080p signals. This is unfortunate; a downconverter represents a significant extra expense, power consumption, and hassle, regardless of the fact that the display resolution is sub-HD to begin with.

If this is an issue you can overlook – if you don't shoot 4K, or use cameras with internal HD downconversion, for instance – the Gratical HD viewfinder is a very solid option. The feature set is titanic and the pictures excellent. It's half the price of an Arri EVF-1, as is commonly used on Alexa, which is an LCOS display and which will lack the contrast performance of the Gratical. Regardless, it will be no surprise to see a revised version with six-gigabit SDI and HDMI 2.0 arrive reasonably shortly; in the meantime, though, the Gratical is either at or near the top of the tree.