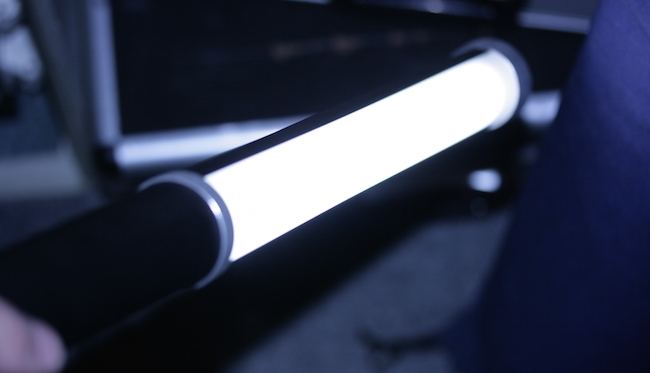 An extremely portable, nicely engineered, fluorescent-tube-alike LED that almost redefines convenience - though at a price.

To quell excitement that this article heralds the long-awaited development of a practical lightsaber , let's start with the basics: Westcott's Ice Light, of which this is the second generation, looks at first glance like a fluorescent tube, but in fact it's LED-driven. The underlying technology is revealed by the fact that it's dimmable without colour shift, something that no fluorescent tube (and few other light sources, period) can do, no matter what they tell you. 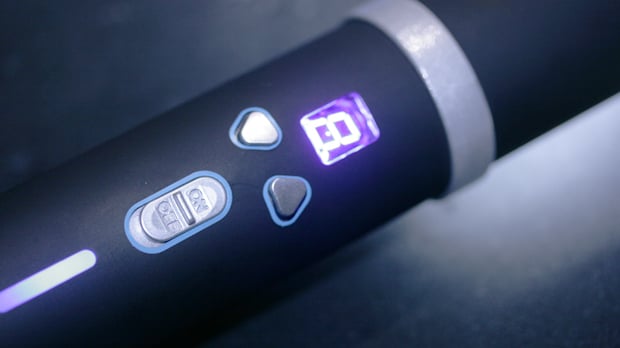 The Ice Light is a member of a rather specific class of devices that have been theoretically possible since the development of battery-powered fluorescent tubes, but which are easier with LED technology, and better again in an environment where four-digit sensitivity is normal for modern cameras.

The output is stated to be 50% greater than the Ice Light 1, which consumed 15 watts, and so the consumption on the second generation light is possibly about 23 watts. This would have equated to a practically meaningless glow worm's worth of light a few decades ago. With modern technology, though, more photons can be had per watt consumed, and better use made of them at the camera end. The manufacturer claims that Ice Light 2 has output equivalent to 150W of tungsten, which makes it at least competitive with the best fluorescents on a lumens-per-watt basis - and is probably higher density, in terms of lumens per square inch.

It's the ability to have this in a handheld package with an hour of battery-powered runtime that's new. LEDs have made it possible to build lights at the hundred-watt level (and below) which can be carried around in backpacks and run from camera batteries, with Litepanels and Zylight prominent among manufacturers of products serving this new, high-portability market. Even on more traditional sets, the ability to walk a lighting device in on a stand without running cables is a huge timesaver.

The Ice Light, though, is even more portable than that. Although there are quarter-inch mounting threads on both ends, it is clearly intended to be handheld, and is quite enticing, even to non-Star Wars fans, as an object to pick up and hold. It's a little heavy, and the immediate impression is that the weight should mainly be batteries, but the removable battery module only looks to contain a couple of 18650 cells and one might reasonably assume that most of the mass is in heatsinking. Not only do LED emitters suffer reduced lifespan if run too hot, the colorimetry alters, too, so it's important that this is got right.

The removable battery module is a welcome development given the number of modern devices that have built-in batteries, although at $129 they're not cheap things to have lying around in large numbers. With a bit of basic soldering ability, adaptors could be fabricated to feed the DC input and allow the device to be run for longer periods from larger, separate batteries, but that doesn't really seem like the intent that the designers had. Ice Light is also sold into the stills photography market, where it offers a convenient way for a photographer to manipulate light with an easily-handheld device, and seems to do quite nice things to facial closeups; this is the sort of use that's promoted and seems to be intended.

Westcott like to describe the light as soft, which of course it is in one axis. As with a single fluorescent tube, the shadow characteristic is complex, with soft shadows along the axis of the light, becoming sharper as the angle moves toward the perpendicular. This isn't intended as a criticism, it's the nature of the beast, and it is powerful enough to bounce in at least some circumstances if biaxial softness is required. As regards colour, only a 5600K daylight version is currently offered.

Dimming is from 0-10 in increments of 0.5 and is reasonably visually linear, and as a nice touch, the light fades up from the lowest setting to the target setting when switched on to avoid stabbing people in the retina if they're looking in the wrong direction.

This is one of several things which make the Ice Light 2 seem nicely-engineered. The body has a matte black coating with attractive graphics, the diffuser is illuminated with an even, hotspot-free glow, and displays are bold and easily visible. All of this comes at a cost, of course, and one issue with the Ice Light 2, as with many LED products of any quality, is that it seems expensive. This is especially true given the apparent existence of a significant transatlantic tax. In the United States, B&H sell Ice Light 2 for $549. In London, both Calumet Photographic and Park Cameras sell the same product for UK£549, the equivalent of about $850, which is an eyebrow-raising price hike even if we take into consideration every relevant fee, levy and differentiation in tax. $549 is an ambitious price for a fifteen-watt fluorescent-tube-alike LED light, although potentially tolerable for particularly successful professionals in a world where LED is still at a premium. $850 for the same product, however, is a price many will justifiably baulk at paying.

The only other criticism is that the company should offer TLCI data for the light, or at the very least an R9 number to support the 96 CRI claim. It's possible to achieve 96 CRI and still see significant underexposure of deep reds, represented by the ninth colour chip in a CRI test chart – the exposure of which is not included in the averaged figure given as the final CRI. The red is important because it is commonly lacking in both LED and metal halide sources and is often the reason why LEDs don't make nice skin tones. Really, though, the gold standard assessment here is TLCI, and at the top of the market, where Ice Light 2 is positioned, it's reasonable to expect things to be done properly.

The convenience, though, is unmatched. With dimmability that a fluorescent can't match, LED robustness and efficiency, and a 50% increase in output over the original Ice Light, it's a decent product. Right now, it's priced to appeal to people who have a very specific need for exactly this sort of thing, though naturally, this may change in time.