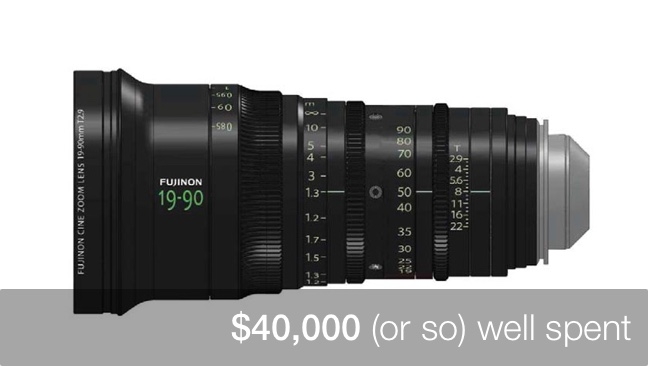 While we always try to keep our feet firmly on the ground, sometimes extreme high-end kit is just too good to ignore. And that is exactly the case with Fujinon's ZK4.7x19 19-90mm Cabrio.

When discussing camera equipment for documentary work, or for any other situation that isn't upscale single-camera drama production, we've often made reference to ENG-style lenses. Traditionally, the lens was fifty per cent of the ergonomic setup of a news camera, and that's often a problem now that cameras have become very affordable indeed while lenses have not. This is particularly the case with regard to things like Blackmagic's Ursa range (and probably even more the upcoming Ursa Mini), as well as the AJA Cion, all the way up to Amira and high-end Sony.

Those cameras don't accommodate ENG lenses very well; the sensors are too big, and most ENG glass is set up to deal with three-chip CCD cameras. With adaptors it can be made to work, but those adaptors can be expensive, compromise optical quality, necessarily cost a couple of stops, and add to size and weight.

We've looked at various lower-cost solutions to this before, but in doing so, often made comparisons to one thing in particular: Fujinon's ZK4.7x19 19-90mm Cabrio Compact Cinema Zoom. So, when the opportunity came up to look at one, it was hard to turn down.

The word “cabrio” implies, as with a car, that the lens is convertible, with a removable zoom grip to accommodate single-camera working with conventional remote focus. Really, though, the purpose of this lens is to behave as an ENG zoom on PL-mount cameras using super-35mm sensors. In some ways, these are not easy shoes to fill: broadcast lenses tend to have an enormous zoom range, particularly including a very short wide end, a doubler, and minimum stops below f/2, as well as macro, inbuilt back focus adjustment, and the strength to support the weight the camera.

What's more, they're only required to fill tiny two-thirds-inch chips, so that speed is far easier to achieve (though the single-digit wide end is more difficult.)

While it would be possible to build a PL-mount lens with these features, Fujinon has made a sensible compromise. Although the 19-90 is a chunky piece of equipment and can make some cameras front-heavy, it's still admirably compact and achieves a nippy f/2.9. It requires no lens supports and is fully capable of fulfilling its role as a key part of a camera's handling system. The 19mm wide end is adequate on super-35mm sensors, and although 90mm isn't gigantically telephoto, the lens maintains optical performance all the way down in a way that newsgathering equipment doesn't necessarily need to. There is a very small degree of visibly-ramped vignetting – less than half a stop – in the last quarter of the zoom range, wide open.

The lens is fairly well-known, of course, and it's equally common knowledge that equipment at this level will remain aspirational for all but the most well-heeled users; the Fuji Cabrio 19-90 is not a budget-priced piece of kit. The build quality is as staggeringly nice as one would expect, metal throughout and a tidy grey surface finish with boldy-marked distance, stop and focal length legends.

If one were to seek reasons to complain, the focus action is perhaps a little slack – not in even the slightest sense lacking in precision or accuracy, of course, but a little too easy to move, and easy to knock, in comparison to the rather more firmly-damped norm of ENG glass. Picky as this seems, the purpose of the high end is to satisfy pickiness. On the other hand, no externally-mounted motor would ever have trouble driving the focus action on this lens.

The pictures projected onto one's sensor of choice have almost no flare, distortion, aberration or optical inconsistencies. As with a lot of very high-end lenses, this almost becomes a criticism; the lens is almost completely free from character, although that's a matter of perspective. Clean, artefact-free imaging is, naturally, highly desirable in something intended to be a general-purpose lens; nobody's going to rent the 19-90 with the idea that it's going to help give a production a look. That's what filters, nets, and other effects-oriented optical interventions are for. The macro mode works very much like that on a conventional ENG lens, with the back focus adjustment and macro facility operating from the same control (back focus adjustment is not lost when engaging macro mode).

In the past, cinema zooms could be slow, soft, and hard to handle, and widely considered inappropriate for certain types of production. Even now, it's rare to find entire features shot on zooms. Tradition aside, though, it would be entirely possible and entirely reasonable to shoot practically anything on this lens without serious risk of anyone complaining during the quality-control process.

To some extent, the overall excellence of this lens is expected: with a common price of somewhat less than $40,000 it would be downright offensive for it to be anything other than superb. It's as well to recall competitors, too; deposits are now being taken on Canon's CN17x7, which is considerably more capable in terms of focal length, with only a very reasonable falloff in stop at the long end and almost $10,000 cheaper. It also looks a lot more like a conventional TV lens and weighs just a little more, at 6.39lb over the Fuji's 5.6lb. These increases in capability can only force optical quality one way, although both lenses remain relevant and interesting products.

We don't intend to make a habit of referring to such determinedly high-end equipment in this way, but the Fujinon ZK4.7x19 19-90mm Compact Cinema Zoom is Gear We Like. As we've said, it shouldn't be any surprise to discover that what we might call ‘relaxed financial restrictions’ facilitate the pursuit of excellence, but the lens is such a well-formed answer to a severe and common problem that it's difficult to dislike.

That's not, of course, to withdraw our previous requests for an ENG-style single-sensor lens priced at a point more suitable for users of DSLRs. Fujinon will not be offended by the idea that a market exists for a lens at least somewhat like this, for considerably less money. A large number of breaths are being held in anticipation of a release of this kind. Until that happens, though, the 19-90 rents for about £300 a day, and users are very unlikely to be disappointed.