A surprise avalanche of Sony 4K camera news. Let's put it in perspective... 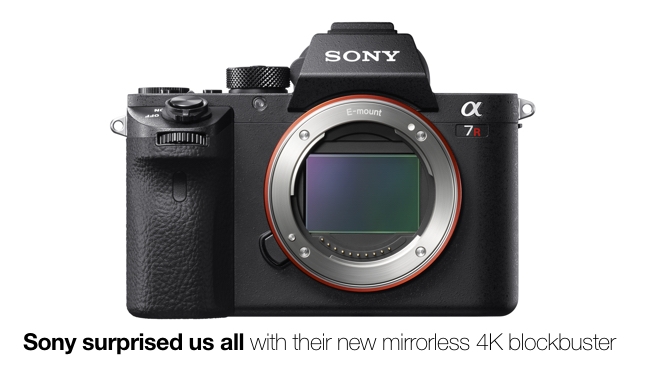 Sony even takes itself by surprise with today's big news

Well, that was a surprise. Even though I actually spent the day with Sony Professional at their Pinewood studios yesterday, there wasn't an inkling that they were about to launch a new and - at least on the face of it - very important camera today. It wasn't that it was kept a secret: it's just that they hadn't been told either. Not completely surprising because the A7R II is one of those products that is, for Sony, slightly awkward to categorise, because it comes between consumer and professional. The likelihood is that "Consumer" Sony have been planning the launch for some time but we "Professionals" fall under their radar.

So, the first thing to say here is: the next few days are going to be rather Sony-laden. We can't help it, because they're just in the process of releasing a bunch of new 4K capable still cameras. In addition, we've just had our first hands-on with the PXW-X100 and will publish that review as soon as it's written, which is likely to be Monday. (We were the first publication in Europe to be given a "hands-on".)

When we first saw the reports of the new A7R II, our first reaction was "it's a big-sensor still camera that can do video". In other words - not really a big deal because the video specs will be underwhelming - or at least, not cutting edge.

But it looks like we hasty coming to that conclusion. Reading the press release closely, it seems that this most certainly is a camera that video makers should take seriously.

It might be that Sony has been encouraged by the absolutely run-away success of the A7S - the low light member of the family that has a seemingly paltry twelve megapixels, but which nevertheless takes wonderful-looking photos and video in low light (or any light, for that matter). Maybe they wanted to follow on from that with a camera with a more pixels and other features which cameras today (as opposed to a year ago) are expected to have.

We haven't seen yet how the new camera performs but it does appear to have some very good low-light qualifications too. The press release carefully avoids mentioning the sensitivity when it's shooting video. We don't expect it to be anything like as sensitive as the A7R, but noise is the biggest issue in low light, and if the new camera can call on more pixels from its full sensor to supply information for each of the "4K pixels", then they might be able the apparent sensitivity through that. There's also a hint that there is less space between pixels, which would allow them to be proportionately bigger.

Talking of pixels, while in "Super 35mm mode", the camera uses approximately 1.8 times the number of pixels that you need to make a 4K picture, which means that after deBayering, we should be left with a "true" 4K image.

And - this is big! - there's now on-board 4K recording. Using XAVC-S, which is essentially a "consumer" version of Sony's robust XAVC codec (consumer only in the way it is wrapped) , the A7R II can store 4K video internally. This was a major omission from the A7S, but one which was acceptable at the time. Things have moved on since it was revealed over a year ago.

So, we can't help asking ourselves (and Sony, who gave us a big "we don't know, and even if we did, we wouldn't say at this stage"): will there be an A7S II?

Right or wrong, you read it here first!

(And I just wanted to mention that we've been recalled to Sony's facility at Pinewood on Monday for the big press "reveal" of the new cameras. If you have any questions for then, let me know in the comments or write to me: editor@redsharknews.com)