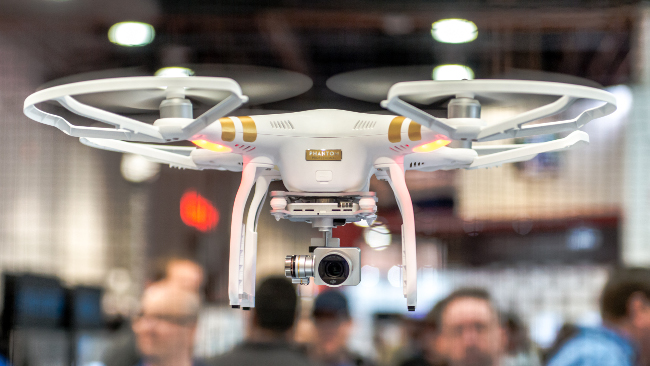 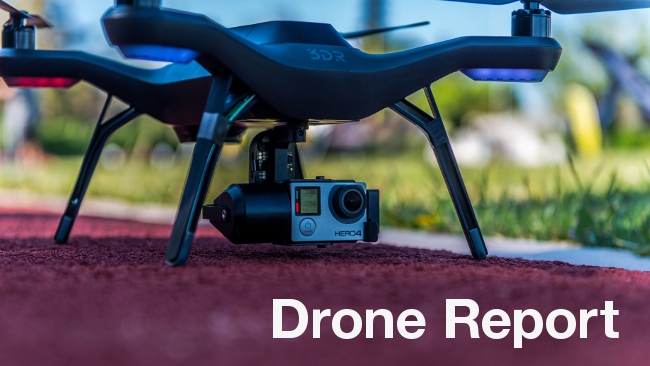 Guest author George Krieger, cinematographer and drone pilot (amongst many other things) takes us on a drone tour circa 2015, revealing the hottest consumer drones that will undoubtedly find their way to productions near you.

Drones are bringing high budget capabilities to low budget productions, not only in film and broadcasting, but in many other commercial industries, as well as the arts. Drones are set to be one of the fastest growing emerging technologies this year. The industry is growing so fast that we are already starting to see ready-to-fly (RTF) consumer drones with innovating features for film production. Chinese based DJI Global, which currently makes the top selling drones in the world, has increased new product launches to a rate that outpaces most mobile device updates.

I have been to several conferences in just the last four months, seeing a new drone at every one of them. This weekend, I attended the Nua.io Drones, Data X Conference in Santa Cruz, California. It was held directly after the SUAS News Conference in San Francisco and included many of the same companies, products and services. These two drone-specific conferences highlighted what I saw this year at both CES and NAB. These events and others like them have been showing us all year that 2015 is all about the drones. It also showed us that broadcast quality equipment is being reinvented and the widening disparity in price and shinking difference in functionality will eventually bring consumer-level equipment that can do broadcast-level production.

Currently, we are seeing a lot of new companies specializing in aerial production. Most run specialized heavy lift aerial platforms like the Freefly Alta that carry RED Digital Cinema and Blackmagic Cinema cameras. 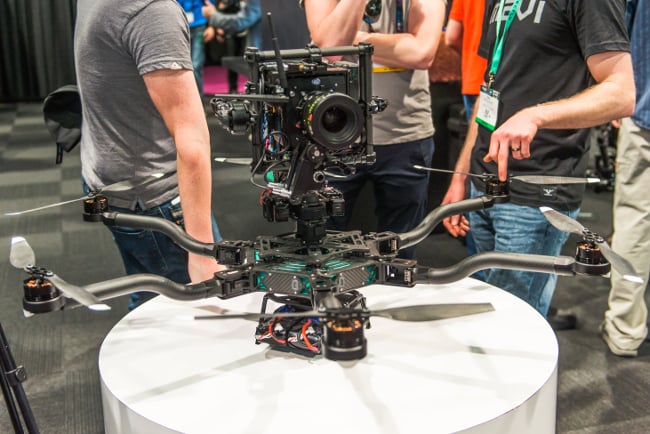 Some specialized production operations are building their own aircraft. ICAM Copters put together a gas powered, eight-foot-long helicopter. It uses a DJI ACE flight controller system to control multi-rotor drones. The ICAM GT80X can carry a variety of camera platforms including: RED Epic, Blackmagic, Canon 5D and the Sony FS100. ICAM Copters have a 40 minute flight time carrying that kind of load. 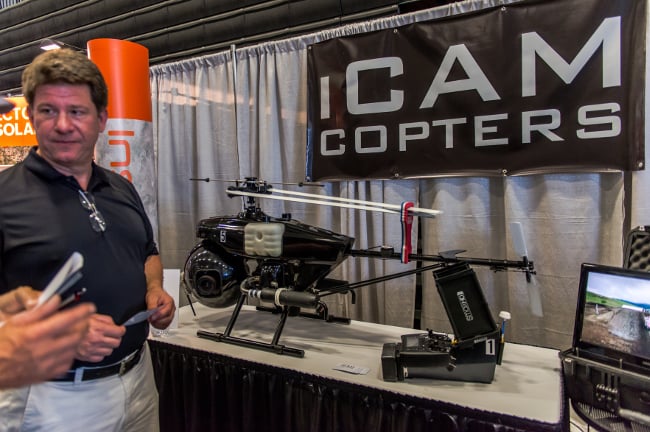 ICAM Copters gas powered GT80X can stay airborne for 40 minutes and is a registered FAA aircraft for aerial production.

Operations like these are targeting large budget productions and often have regulatory approval and licensing to fly commercially all over the world. While there are more and more of these operations opening up every month, drones are playing a much larger role in the independent and low budget production market. This is where consumer drones come into the picture. There are two levels of consumer drone, toys and prosumer flying cameras. Most drone companies make amazing flying toys, but DJI and 3DR are the top OEM’s that offer more than just a novelty flying experience. Just about every drone made today uses a flight controller from one of these two manufacturers. Both are leading the innovations that make the heavy lift systems fly better for big budget productions and they are offering high level production abilities in their RTF off-the-shelf models to consumers. 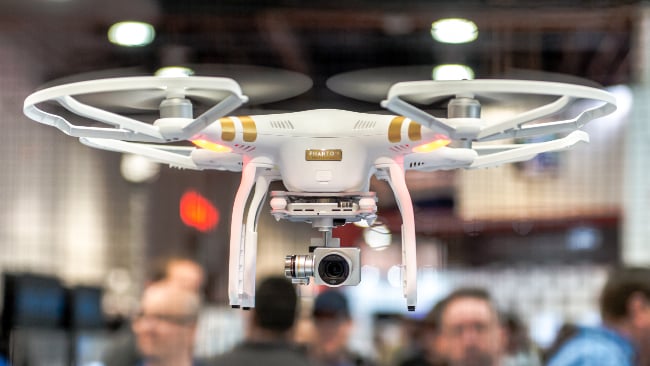 DJI Global Phantom 3 Professional has built in streaming to the internet with its integrated FC350 camera. This is the same camera that comes on the Inspire 1 aircraft.

One production technology that is being disrupted by the drone manufacturers is HD transmission and reception. At the NAB 2015, I spoke with several manufacturers of HD transmission technology for broadcasting. Most systems had a $12K - $18K pricetag and transmitted 1080HD @30fps about 1 mile, with 20-30ms latency. DJI released Lightbridge over a year ago for only $1300. It can transmit 720HD @60fps with 20-30ms latency for over a mile. That is one tenth of the price for a similar functionality. Surely reliability would be better in the more expensive system, but if you can buy 10 systems for the same price, people will start to use them anyway. This eludes to a larger disruption coming. Much of the broadcasting world uses very expensive equipment to do similar functions as hobbyist model aircraft pilots are doing now for much less cost. DJI’s latest model the Phantom 3 has the ability to broadcast directly to Ustream and YouTube. I saw a 15 minute test broadcast by a DJI rep with new firmware that should be released by the time this is published. This  update will now open up live aerial streaming access to the consumer.

Skypixel Poll "How do you see yourself using your drone for 2015?" While most people answered that they do photography almost 60% will also use their drone for filmmaking this year.

The main things that hobbyist's are doing is capturing imagery, stills and video. Romeo Durscher, Director of Education for DJI Global said "We asked the members of Skypixel.com how they plan to use their drone in 2015. It is not a scientific dataset, but it tells us a lot. We found that, of our drone pilots, nearly 60% will use their drone for filmmaking this year." 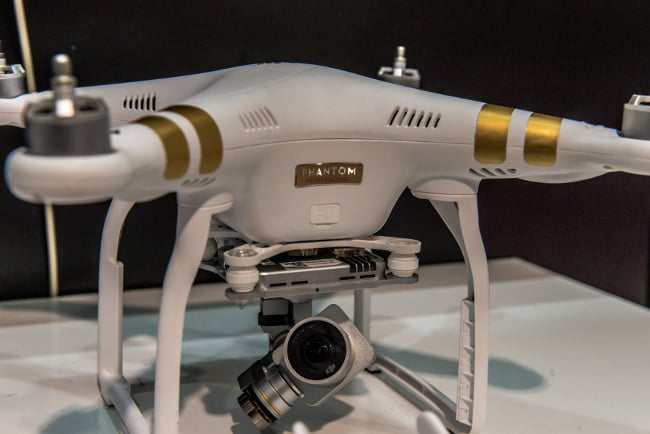 The DJI Phantom 3 Professional and its integrated FC350 camera

Drone manufacturers are becoming camera manufacturers and now produce their own cameras cheaply. Many drones still have options to carry a GoPro camera, but DJI started making its own cameras and now no longer offers new platforms that carry a GoPro. For further proof that DJI has become a camera manufacturer, one only needs to look at the Olympus press release dated February 10th 2015, stating that DJI and two other companies have joined the Micro Four Thirds System Standards Group. The release said "we are pleased to announce that three more companies have recently declared their support for the standard and will be introducing products compliant with the Micro Four Thirds System standard."

Recently, DJI released a new drone called the Phantom 3 Professional. It is integrated with its latest camera, the FC350. This system has DNG raw support and shoots 1080HD @60fps or 4K @30fps with a 20 mm focal length 9 layer non-fisheye lens. It is built on a Sony EXMOR 1/2.3" sensor and offers JPG, DNG, MP4 and MOV (MPEG-4 AVC/H.264) formats. This imaging system now flies on their two flagship products the Phantom 3 Professional and the Inspire 1, which was released last fall. DJI also makes the Ronin and Ronin M camera gimbal systems competing with Freefly MOVI. My impression is that the Micro Four Thirds partnership indicates something other than drone integration of the standard. In my opinion, DJI will develop a similar gimbal system to Ronin, featuring its own integrated camera and lens system before it applies Micro Four Thirds technology directly to aerial platforms. 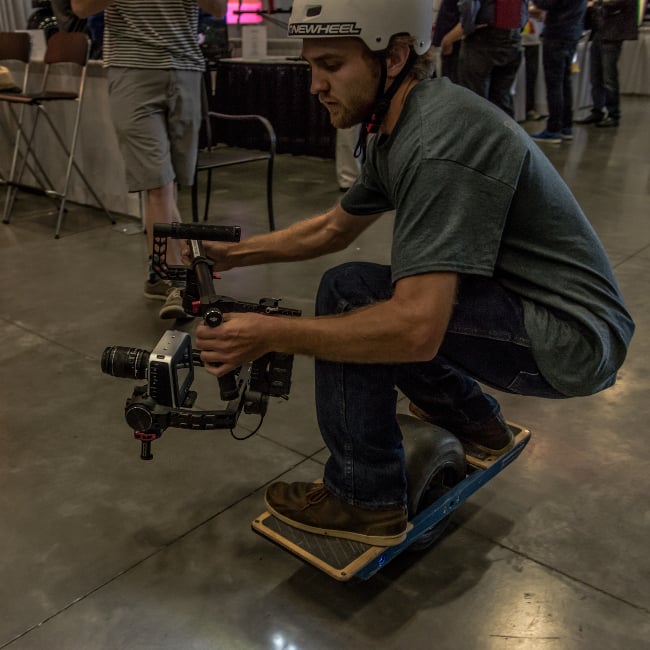 Cameraman riding a OneWheel as a dolly for his DJI Ronin gimbal and Blackmagic Camera setup.

At NAB 2015, 3D Robotics announced its Solo Smart Drone which supports the GoPro Hero 3, 3+ and Hero 4 camera systems. At the Nua.io Drones, Data X Conference, I saw a demonstration of its features. Solo has first of its kind GoPro command-and-control integration, allowing for a pilot to change settings while in flight. The new smart drone system is augmented by two 1 ghz Linux computers, one based in the aircraft and another in the ground-based controller. This allows the drone to run programming that can be coded by the user while still prioritizing the flight controller’s safety and command functions. Essentially, it makes this drone a flying API platform. 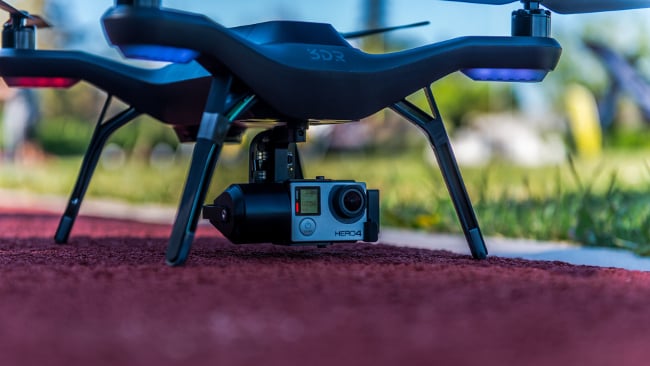 Built into this platform are a few functions made by 3DR for filmmakers and hobbyists. One is called Cable Cam and emulates a virtual camera dolly system. You tell it the two points at each end of the run and the drone will stay on that "cable" or virtual line while you focus on the shot. Currently, only 2 points are supported in the beta version, but 3DR plans to increase that after launch. Orbit, another filmmaker-friendly function, allows you to select a focal point and have the drone circle around it, while keeping camera focus on your point of reference. This shot is not only hard to fly, it is nearly impossible for a human pilot to execute consistently with the same results. Now, a good pilot will be able to film like a great pilot and focus on the camera, rather than the flying tripod. Another function, Follow, does just what it says, as it follows the phone or tablet that the controlling app is running on. This can allow for a drone that follows the action without needing a pilot or film crew. If you take your drone for a bike ride, it can film you riding and without other production equipment or staging for the shot. When you add the Selfie feature, an option that flies the hovers the drone in front of you at a high perspective (looking back at you the whole time), you have a tool-set for amateurs to get into filmmaking quite easily. The new drone also has an advanced accessory bay for hardware integration and support. 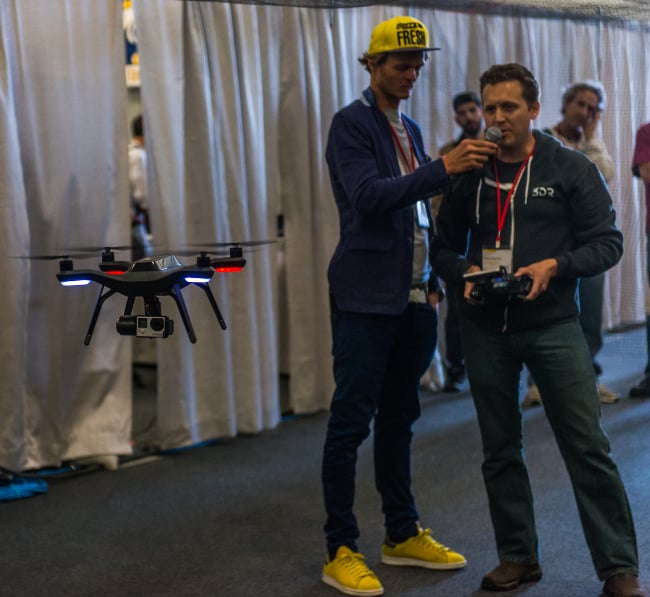 David Merrill, VP of Enabling Technology at 3DR says "Drones are a fantastic way to move a camera through the air. They're much more flexible than classic cinema tools like cranes and dollies. These old-school tools required a dedicated person just to operate the movement machinery...the first wave of drones built for capturing cinematic video followed the earlier model: one pilot and another person aiming the camera. At 3DR we thought: We can do one better! Let's write software that makes the motion part take care of itself, so that a single drone operator can both move AND aim the camera. That's why we invested so much design and software engineering into Smart Shots for Solo; we've now made the motion part easy (flying the drone), so that the operator's mental energy can go into the more creative parts of getting the shot. GoPro and other small HD cameras are already rivaling the quality of way more expensive alternatives, so the distinction between what well-funded professional team versus a creative pilot with a Solo can capture is going to get blurred." 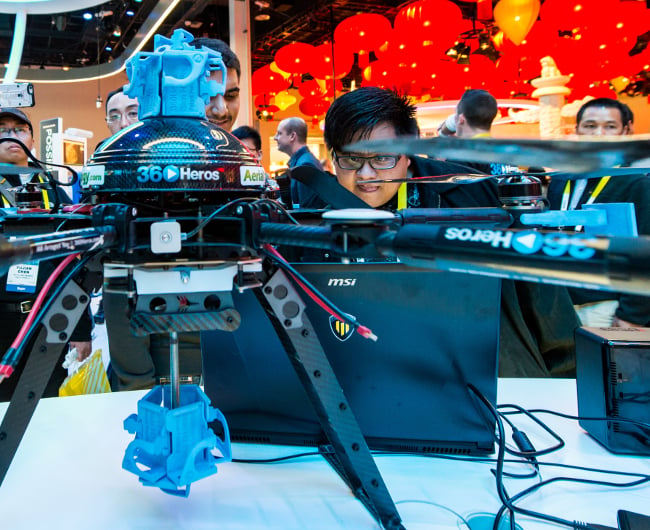 What is next for drone innovation? Watch as camera makers become drone manufacturers. This is already happening in China, as Sprite Limited (maker of GoPro-like action cameras) was at CES, showing off its new drone offering, the Follower. Rumors are that GoPro is developing its own drone and might be in the market sometime next year. You can also expect to see 360 VR technologies on drones in the next year-to-eighteen-months for consumers. There are already a couple of 360 VR drone setups using 18-24 GoPro cameras mounted, so that they can fly without being in the image at all. If GoPro is working on a drone, then you can bet that 360VR will be an option, as they just bought the French company Kolor that makes the top selling 360 VR image stitching software. Somewhere in all that, we should certainly see a dual camera 3D drone come to market, as well. Look for new safety features like collision avoidance and emergency parachutes for airborne emergencies. This year we will also see Drone Application programming rise with the new computing power that's being built in. The technological tools and features available to consumers at reasonable prices will change the playing field in a disruptive way over the next few years. I can’t wait to see what comes next! 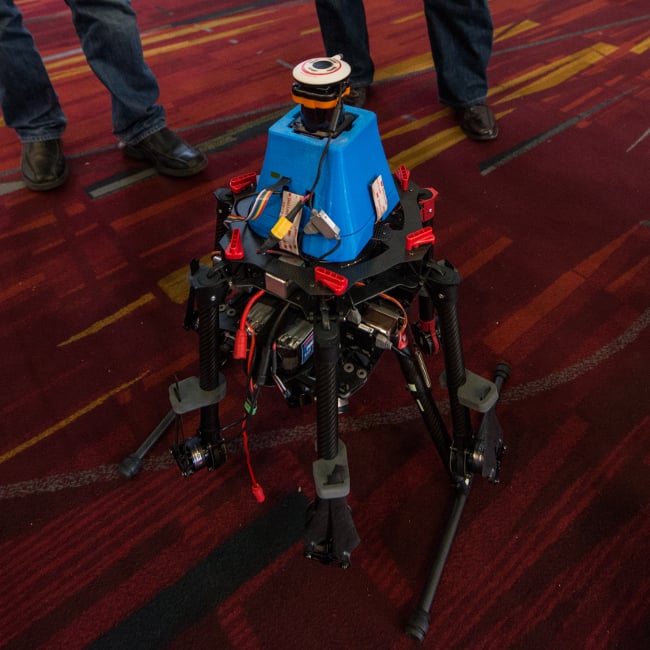 SkySpecs Collision Avoidance System. I will be testing this new collision avoidance system in the new few weeks. It allows the pilot to focus on the filming and not have to worry about running into things.