Does the new Tesla battery have implications for film production? 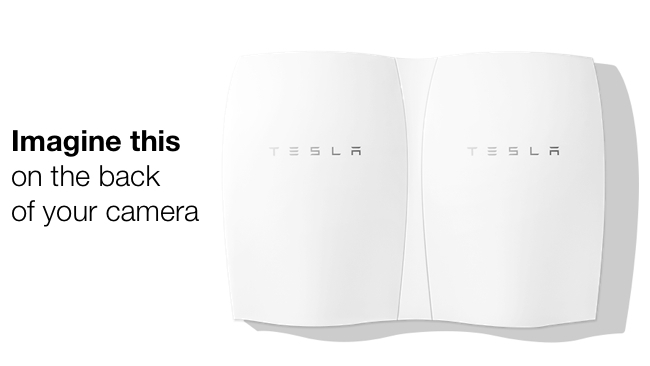 Electric car manufacturer Tesla is branching out into even bigger batteries that can power homes. Does that mean that seriously big, powerful batteries might start becoming a more integral part of our own film sets?

There are various approaches to solving the world's looming energy crises. There's solar, but the sun doesn't always shine. There's tides, but they're only twice a day (in most places, at least). There's wind, but sometimes, as historical sailors frequently found to their cost, it isn't blowy. The solution to this is either an improbably massive international power distribution grid on the assumption that it's always sunny, windy, and high tide somewhere, or (as if this is easier) lots of really big batteries.

Working as we do in a field which is no stranger to really big batteries, developments in their manufacture and deployment are clearly relevant. We note with interest, therefore, that Tesla, the people behind the electric cars, have launched what's intended to be a home battery system, presumably to allow peak load demands to be spread out around the clock. This should certainly make utilities companies happy, as well as allowing people with solar panels to store things up for – literally – a rainy day. A while ago, in the UK, it was quite easy to buy a small personal wind turbine designed to bolt onto the end of a house, and modest subsidies make solar panels worthwhile even in these wintry latitudes.

To be fair, there's something of a question mark over how much new technology Tesla's release really represents. The device is based around lithium-ion batteries, which have good numbers as regards capacity per unit weight and volume, but have problems with longevity as well as the sheer amount of lithium that's available on planet earth. Lithium-ion batteries also use cobalt, which is perhaps a more immediate cause for concern over availability, and overall there's a question mark over the practicality of putting one of these batteries in every home and every car. The alternative battery chemistry nickel metal hydride has fewer concerns in this regard, but still some persist.

Tesla's new invention is a ten kilowatt-hour battery pack, which does raise the entertaining idea of what we could do with it on a film shoot. After all, if someone starts selling these things - $10,000 or under is being discussed – it's a reasonable bet that someone will realise that with modern, highly-sensitive cameras and high efficiency lighting, this is an attractively low-noise, low-maintenance way to run things.

How far does 10 kilowatt hours take you?

Of course, we're already doing this sort of thing to a great extent. Lighting devices up to a couple of hundred watts are regularly run from batteries. Sometimes this means a stack of batteries, either directly, or via a mains inverter. The advent of LED has made this more common, but it's been possible as long as there have been fluorescent lights and small HMIs – and the cameras are really the enabling technology. Regardless of the vector, though, ten kilowatt-hours is more than a lot of shoots use all day – and no, Faster and Even More Furious Nineteen, I'm not looking at you, I'm looking at the stuff that needs a Dedolight kit and a couple of Kino-Flos, but needs to shoot all day, or something that needs a 1.2kW HMI PAR or a couple of redheads for a few hours, or – you get the idea.

Most people are aware of the mathematics. A kilowatt is a thousand watts. A kilowatt-hour is a thousand watts drawn for an hour. Thus, the Tesla battery could power a one-kilowatt light for a full ten-hour shooting day, in theory, although it's best to rely on about 80% of that for most battery technologies, especially when they're anything other than brand new. Tesla claim 92% charge efficiency, although that's pretty exceptional for lithium ion and probably relies on some fairly specific circumstances. The real usable capacity is also likely to be somewhat dependent on the rate at which it's drawn. Batteries have internal resistance, and drawing a higher load through that battery – any battery – results in some amount of the power being lost to that resistance. The more power we draw, the worse the losses, given the basic electronic principle that voltage is equal to current multiplied by resistance, and power is equal to voltage multiplied by current.

Because of all these irritating practicalities, the 10kWh rating is subject to a few limitations. Tesla tell us that the new battery is capable of supplying up to 2,000W, so we can't, for instance, choose to run ten kilowatts of light off it for one hour. This raises the objection that most domestic homes will have peak power consumption of more than 2kW, although Tesla is already talking about ways to use more than one in parallel (I suspect most homes, given a spin dryer, electric water heater and oven, or equivalents, might need three or four).

From a filmmaking perspective, some smoke machines need 3kW of power, on their own, and lighting devices come in various sizes up to 18kW, which is not currently a reasonable target to run from almost any realistic battery system. But with new equipment – items such as Photon Beard's LED redheads or Zylight's upcoming 200W LED fresnel – it's only going to become more and more practical to work entirely from stored energy. The wailing of generator operators is audible already.